The Tennessee-based donkey trainer lets us in on some entry level dos and don'ts when it comes to training the personable and affectionate equine. 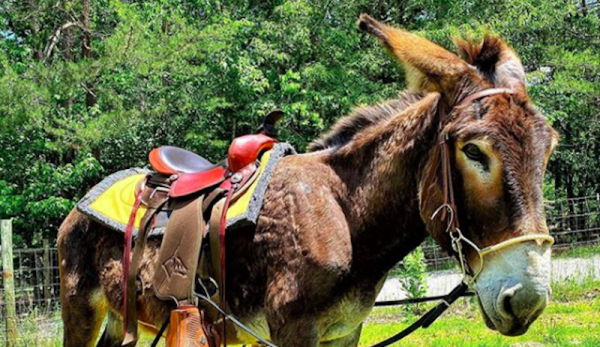 Based in Tennessee, Silvera’s initial interest in donkeys came about when she learned that they were effective guardians for at-risk livestock.

“I had tried livestock guardian dogs, and they just did not work out for multiple reasons,” she recalls. “I decided to get a donkey and, after reading about donkeys, learned I would need two. Not all donkeys are cut out for guarding, so you have to choose the donkey carefully.”

Silvera’s guardian donkeys worked out. And after becoming smitten by their “personable and affectionate” nature, she eventually graduated to becoming a respected donkey trainer.

We spoke to Silvera about some vital dos and don’ts for early-stage donkey training. She also dispelled some of the misconceptions people have about the animals.

Which are better for your farmŌĆödonkeys or horses?

“I learned very early that donkeys cannot be trained like a horse,” says Silvera when asked about the earliest lesson she learned when coming to grips with her new equine friends.

“Training a donkey like a horse often leads to a sour donkey,” she explains. “Donkeys also need you to earn their trust before they willingly do as you ask. You’ve got to ask the right way.

“Setting up communication makes life much easier for the donkey and the caregiver.”

Building Trust With Your Donkey

Going deeper into building trust with your donkey, Silvera says that as long as the donkey in question “has had good experiences with humans and had some kind of early training,” then it shouldn’t be too difficult to forge a bond.

But if a donkey has been through negative experiences with humans, including being mistreated, it’s imperative you don’t rush what might be a fearful donkey.

“Taking into consideration the donkey’s background and past experiences is importantŌĆöhaving empathy and trying to see the world through its eyes and accepting it takes the time it takes.”

“No time spent earning your donkey’s trust is a waste,” she explains. “If you spend time earning that trust, then setting up solid communication with your donkey, they will be more likely to do as you ask no matter what the direction you take in more advanced training.”

Never rush a donkey, especially during the first stages of training, as it could set you back.

“Get in the mindset that you are investing in a partnership with a companion,” Silvera says. “Good relationships take time to build.”

#happymondayeveryone This week IŌĆÖm working on an article for the website about ŌĆśdifficultŌĆÖ donkeys .. ? Key points to understanding is it them? Or is it you? ?? to be notified of articles, new YouTube videos, tips an donkey inspiration make sure to sign up for the DLL! #donkeybehaviour #donkeyday #donkeycare #donkeyride

Asked about the biggest misconceptions people have about donkeys, Silvera says, “It’s that they aren’t as smart as horses. In reality, they may be smarter. They are cautious and self-preserving and they prefer to think about things before they do them, especially if they aren’t sure about the person who is asking them to do something.”

Silvera adds that correctly trained donkeys are “a surefooted riding mount.” They also make for “amazing hiking companions,” not least because you’re able to pack a lunch on the donkey’s back.

Getting the Right Donkey for Your Land

If you’ve been considering adding a donkey to your homestead, Silvera encourages people to “think about what their goals will be for the donkey.” Also spend time reading up and watching videos about the animals.

“After you decide what you want the donkey for, then seek out the donkey that can best fit your needs,” she explains. “For example, if you want a donkey to guard your goats and provide enjoyable rides around the farm, make sure to choose a donkey with the right temperament for guarding and that’s big enough to carry your weight. Choosing the right donkey for your goals will help ensure that you and the donkey will be successful.”

Finally, Silvera adds that donkeys are herd animals. “Be prepared to have at least two. Donkeys need other equine.”