After brushing up on tools and motors during my tool-shopping expedition, I spent some time on the web looking at my options and reading reviews for angle grinders. 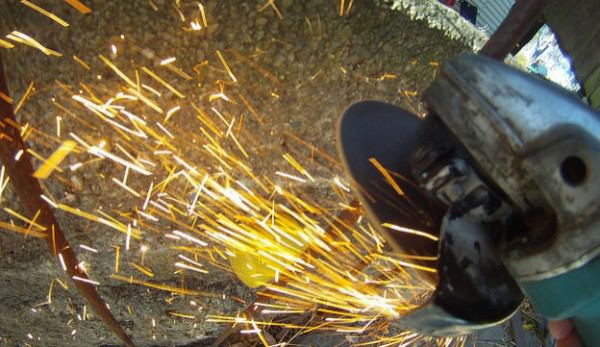 After brushing up on tools and motors during my tool-shopping expedition, I spent some time on the web looking at my options and reading reviews for angle grinders. I quickly discovered that no matter how important I thoughtÂ torque should be, nobody lists it. The closest I came were tool descriptors of “high torque.” Often times the type of drive isn’t described either. I was also unable to find anyÂ angle grinders made in the U.S.â€”most are now made in China.

In the end I bought a 1.1 hp, 8-amp, 11,000 rpm Bosch 4Â˝-inch angle grinder with a paddle switch. Reviewers reported low vibration, ease of handling, light weight and dependability. I especially liked comments from professional welders and metal workers who preferred the German-made grinder to similar-sized alternatives.

I decided the paddle switch was important for a newbie at angle grinding. It is easy to get into trouble if a cutting or grinding wheel gets into the wrong position, digs into the work piece and kicks back at the operator. For a klutz like me, it means the motor stops when I release my grip. No switches or triggers to disengage.

Likewise, the guard is easy to adjust, which means I am more likely to do so. It also has “Service Minder” brushes that will shut down the motor before damage can be done, letting me know they need to be replaced. Regular service should include checking brushes for replacement. While that’s a nice idea, I know I am not likely to do so, no matter my intentions.

The grinder with a selection of cutting, grinding and buffing wheels cost less than $100â€”well within what I had budgeted. So far I’ve only cut some rebar with it, but I am more than confident this is a tool that will become a favorite and very well used.