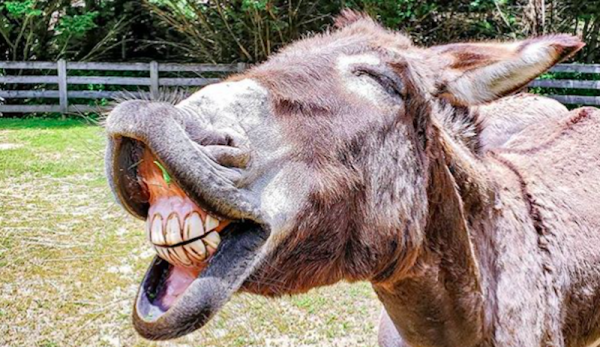 “My husband and I are both disabled combat veterans and suffer from post-traumatic stress disorder,” says Jennifer Woolwine, the founder of Little Mountain Ark Farm in Virginia’s Blue Ridge Mountains.

Woolwine and her husband originally considered moving to Florida when her brother-in-law persuaded them to check out a horse farm for sale in Virginia surrounded by 6,000 acres of national forest.

“The farm had gorgeous green rolling pastures and hills, with views of the Blue Ridge Mountains,” recalls Woolwine. “There were apple, cherry and pear trees with a large riding ring for horses.”

Overwhelmed by a feeling of peace and serenity, Woolwine says the two veterans “knew right away that the farm was where we were meant to be.” Since embracing farming life, Woolwine has also taken to documenting the daily operations of Little Mountain Ark Farm on her Instagram account.

We spoke to Woolwine about living with peafowl and caring for donkeys. We also heard the inside story on the farm’s herd protector named Rocky.

Woolwine says that Little Mountain Ark Farm has become a “sanctuary.” She credits moving to the farm with playing “a pivotal role in healing from invisible wounds of war.”

She adds that, one day, they hope to share the Little Mountain Ark Farm experience with other disabled veterans.

Getting To Know Peafowl

If you check out Little Mountain Ark Farm’s social media accounts, you’ll notice that the venture involves raising some particularly vibrant looking peafowl. The birds live in their own coop that features various roosting spots and a spacious amount of room to roam.

When Peafowl Mix With Other Animals

Our peacock Bam Bam during his free range adventure over the summer. ? For those that don't know the story we let Bam Bam out of his aviary after 3 months of keeping him penned up. We got him from a breeder a few hours away and he had never free ranged before so we were so excited to let him out. After a few hours of him just hanging around the farm, a thunderstorm came through and I lost sight of him in the storm. When it finally passed, I went out looking for him and he was nowhere to be found. ?? We have 42 acres and we are surrounded by 6,000 acres of National Forest. I searched for 5 days, in the woods, in the rain, playing peafowl calls on my phone. I even distributed fliers all over town, notified the Sheriff's department and the Game Warden. I was a mess! ? Thankfully on the morning of day 6 he was waiting by the door to his enclosure. I guess he took pity on me and came home. ?‍♀️? I am hoping since the peachicks were born on the farm, that when we finally do let the peafowl out to free range, they will help keep Bam Bam from taking off! Fingers crossed!!! ???? . . . . . . . . . . . . . . . . #peafowlofinstagram #peacocksofinstagram #peacocksofig #peafowls_world #ducksnclucks #farmsteadmagic #myfarmstory #homesteadeverafter #countrysideandfarmlife #thingsonlyfarmersunderstand #farmgirlglitter #poetryonthefarm #pollinatejoy #farmlivingisthelifeforme #simplehappycountrylife #smallfarmcharm #raw_country #mycountrycapture #country_features #backyardpoultrymag #iamcountryside

“Our peafowl get along great with our chickens and ducks except when the peahen was laying,” says Woolwine, when asked about how the birds integrate with the other animals on the farm. “She became very protective of her nesting area and would chase the other animals out.”

Alongside peafowl, Little Mountain Ark Farm also hosts a drove of donkeys. “I had zero experience with equines,” recalls Woowline. “However, I was fascinated by donkeys’ big ears and their charismatic personalities.”

Woolwine characterizes her donkeys as “companion pets,” but mentions that they also take on a role as “guardians against predators such as coyotes, foxes, raccoons and possums.”

G?? D ??????? ??? Happy Sunday friends! ? It's a beautiful summer day on the farm. All the stalls are cleaned and animals fed, so I'm enjoying my morning cup of coffee on the back porch with hubby and my conure, Booger. How are you spending your morning? ? I just want to say ????? ??? again to everyone that has shared my new account, and for all the kind messages and comments I have received. I never would have been able to grow this account so quickly after my previous account (virginia.farm.living) was hacked, without the amazing support from the farming community on Instagram. I am just so grateful and incredibly blessed. ?? Enjoy this gorgeous day! ~~~~~~~~~~~~~~~~~~~~~~~~~~~~~~ P.S. Just a reminder Jade @jademblock and I are no longer the hosts for #simplehappycountrylife ? We had such a great time hosting and are so grateful for the opportunity. Please continue using it and tag the creator Brandy @bbsruralroutephotos in your posts! . . . . . . . . . . . . . . . . . . . . #farmgirlglitter @pivot.farm @theredbarnfarm #pollinatejoy @axeandroothomestead #myfarmstory @addisonfarmssc @hillfamilyfarmstead @kirklandmeadowsfarm #homesteadersofinstagram #homesteadersofamerica #happyhomesteading #hobbyfarm #cultivatingahomestead #homesteaddreams #farmher #poetryonthefarm #honestlyfarming #farmfreshhappiness #countrysideandfarmlife @sweckerfarm @cottagecomforts @viets_brook_farm #donkeysofinstagram #donkey_lovers_world #earbraylove with @stickyhollerfarm #afbfshare #lovecountrylifestyle

When it comes to the personality of Little Mountain Ark Farm’s donkeys, Woolwine calls them “very social animals” and says that they get along well with other equines.

“They love to roll in the sand and play and they form extraordinarily strong bonds with other donkeys and other animals,” she explains. “Once you gain your donkey’s trust, it will strengthen your bond even more. Donkeys have hilarious personalities, and we really enjoy having them on the farm.”

Rocky is a donkey who’s become the herd protector at Little Mountain Ark Farm. “He takes his job very seriously,” says Woolwine. “His trust took the longest to gain, but it was so worth it. He is a big old softie and loves butt scratches and will smile for the camera.”

If you were wondering, Rocky’s favorite treats include iced oatmeal cookies.