Medium-sized, long-horned Ankole-Watusi, produced high-fat milk; breeders may add them to the herd to dairy herds to boost the butter-fat levels. 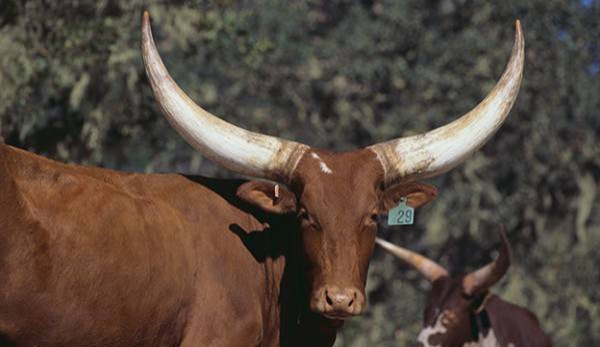 Use: The Ankole-Watusi are used in the United States for roping–and meat production because of their low fat and low cholesterol content. The milk is about 10 percent fat. Some dairy farmers have used crossbred Ankole-Watusi cows in their herds to boost the butter-fat levels.

History: Forerunners of the breed were raised by Egyptian farmers in the Nile Valley 6,000 years ago. They eventually spread to Ethiopia and southern Africa where they were crossed with humped Zebu cattle from India to produce the Sanga, which became the base of many African breeds including the Ankoli-Watusi.

Conformation: These medium-sized cattle have long, large-diameter horns. Cattle may be solid or spotted in color, according to the Ankole-Watusi International Registry. The Ankole-Watusi is medium in size, with cows weighing 900-1200 pounds and bulls weighing 1000-1600 pounds. Newborn calves weigh 30-50 pounds.

Special Considerations/Notes: Ankole-Watusi tolerate temperature and weather extremes well, says the breed’s international registry. The large horns act as radiators; blood circulating through the horn area is cooled and then returned to the main body. This allows excess body heat to be dispersed. At night, the herd-members sleep together, with the calves in the center of the group for protection. The horns of the adults serve as formidable weapons against any intruders.