Last week, my youngest hen, Baby Jo, came down with the fowl pox virus. Since then, another one of my hens, Bobbi Jo, was also stricken by this nasty disease. 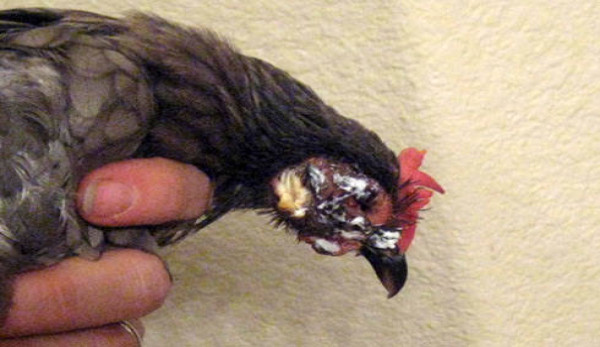 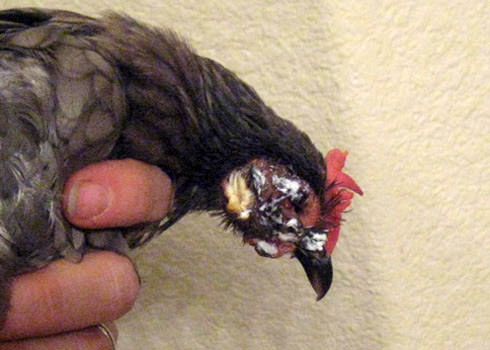 Bobbi Jo came down with the fowl pox virus and has to have antibiotic cream applied to the lesoins once a day.

Last week, my youngest hen, Baby Jo, came down with the fowl pox virus. Since then, another one of my hens, Bobbi Jo, was also stricken by this nasty disease.

When Baby Jo first developed lesions on her face, comb and wattle, I took her to my sister Heidi, a veterinarian. Around that time, I noticed Bobbi Jo had a few boils on her face, too. Unlike Baby Jo, Betty Jo just had a few lumps here and there, and she was acting normal.

But a few days ago, everything changed. I opened the coop door one morning and found Bobbi Jo huddled in a corner. I picked her up and was horrified to see her face covered with boils. Her eyes were swollen shut, and she was limp when I lifted her.
Ā
I rushed her to Heidi, who had had success treating Baby Jo and got my youngest hen running with the flock. Because fowl pox virus canāt be cured, supportive treatment was all Heidi could provide to Baby Jo. The tube feedings, antibiotics and time in the incubator helped, and Baby Joās immune system was able to fight off the virus. I was hoping we could do the same for Bobbi Jo.

Money was an issue, however. Baby Joās stint in the hospital cost me $125, and thatās with my sisterās family discount. I couldnāt spend another $125 on Bobbi Jo. Heidiās solution was to treat Bobbi Jo at her house, tube feeding her and keeping her warm through the night. The hen received an antibiotic injectio, and came home to me the next day with the same instructions Iād gotten for Baby Jo: Baytril once a day plus the application of an antibiotic cream applied to the lesions.
Ā
Bobbi Jo is on the mend, though sheās still not well enough to go back with the flock. Iām keeping her in a carrier in my bedroom, where I can monitor her food and water intake and easily medicate her once a day. Sheās taking longer to recover than Baby Jo did, but I was happy to see her at least eating mealworms this morning and pecking at her pellets. Her eyes are only barely open, but itās enough for her to be able to find her food.

Heidi is working on purchasing a vaccine for me so we can inoculate the rest of my small flock before they all develop the virus. They are molting, which puts them at greater risk for the disease. Seems anything that weakens the birdsā immune system can make them prone to developing it.
Ā
In the meantime, Iām keeping careful watch on my other birds and hoping Baby Jo and Bobbi Jo are the only victims of this nasty bug.