This old-fashioned recipe deserves our attention. 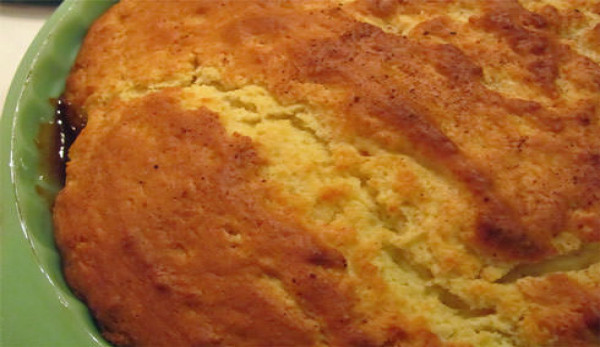 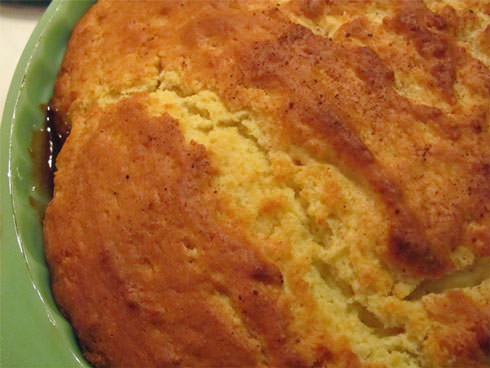 This 19th century recipe for apple pan dowdy, aka cottage pudding with apples, caught my eye in an historic cookbook when I was trawling for an old-fashioned dessert that wasn’t a pie. Cottage pudding is actually a simple cake; maybe the word “pudding” was used as the British use it, to mean any and all desserts?Â

Typically, this recipe would be topped with a cornstarch-thickened sauce, maybe lemon, butterscotch or vanilla-flavored. This variation is more similar to an upside-down cake, for which I’ve always had a weakness. The lightly sweetened apple slices line the bottom of the baking pan, and the cake batter is poured on top and baked.Â

This is a recipe you might find on a stained index card in your grandmotherâ€™s collection. Itâ€™s a dessert each cook can make her own. For example, thereâ€™s no reason blueberries, pear or pineapple wouldn’t work just as well. Add a 1/2 teaspoon of vanilla or a sprinkle of cardamom or nutmeg, as I did. Flip the servings over when you serve it if you want to show off the fruit. Bake it in a pie pan to serve in wedges or a square pan instead. Add whipped cream or ice cream to fancy it up. One recipe I found called for two separated eggs, which would make a lighter cake. Another suggested layering marmalade, rather than fruit or sauce, on the bottom of the baking dish in a pinch.

This recipe is adapted from The Fannie Farmer Cookbook, 6th edition, published by Little, Brown and Co. (original copyright 1896 by Fannie Merritt Farmer).

Heat the oven to 350 degrees.Â

Arrange the sliced apples in a greased pie pan or 9-by-9-inch baking dish. Sprinkle with brown sugar, cinnamon and nutmeg.

In a large mixing bowl, cream the butter and sugar well. Add the egg, and beat until smooth. In a separate mixing bowl, combine the flour, baking powder and salt, and add this to the butter-sugar-egg mix, alternating with the milk. Spoon this batter over the apple slices. Bake for about 30 minutes or until the cake is golden brown. Cool slightly before cutting.