Why I’m Using an Apple Picker in the Winter

I believe some farm tools can be used for jobs other than their intended purposes. As an example, I recently got creative with an apple picker. 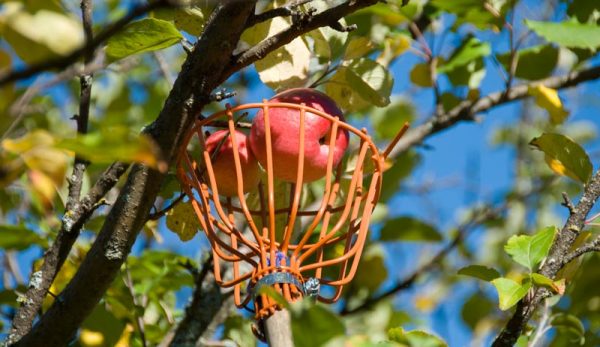 I’m a firm believer that some farm tools can (and should) be used for more than their intended purposes. Ask anyone. I’ve been known to use an old hand saw for scraping away leaf debris when working in the forest. On windy days I’ve used a digging bar (which is very heavy) as a “paperweight” to keep tarps from blowing away. Let’s just say I like to think outside the box.

Of course, even I have to chuckle at the fact that I’ve been using an apple picker in the dead of winter with two feet of snow on the ground. No, I’m not out harvesting what few apples remain on the dormant trees. Believe it or not, I’m using it for snow removal.

Allow me to explain. Snow is surprisingly heavy, particularly when it’s wet from melting on a warm day. Which means that when snow starts to pile up on the slanted roof of a building, you need to watch out.

Last week, I planned to move some hay bales from a storage barn that has a steeply slanted roof. Thanks to a heavy snowfall a few days prior, a lot of snow inhabited the roof above the door, to the point that it was hanging over the edge of the roof and threatening to fall down on anyone who entered the building. Only the cold weather allowed the snow to defy gravity and hover over the edge of the roof. Just the same, I didn’t trust it not to slip off and fall on top of me while I was working.

As a result, I needed a long tool so I could reach the roof and knock down the snow.  As it turned out, the handiest tool was a very long apple picker. With it, I stood back a safe distance from the roof and brush the top of it against the snow, knocking the heavy load to the ground.

Of course, any project like this should be undertaken with caution—you should wear safety goggles to keep snow out of your eyes, and if there’s a substantial load of snow on the roof, you might want to find a different solution. No need to get buried in an avalanche from your own roof!

But this project goes to show why quality farm tools can come in handy in situations where you least expect it—like during the height of winter when no one would normally expect to have any use for an apple picker.