We lost our big, old apple tree in a windstorm last week. Although the tree was half dead and produced only a handful of fruits, I will miss it. 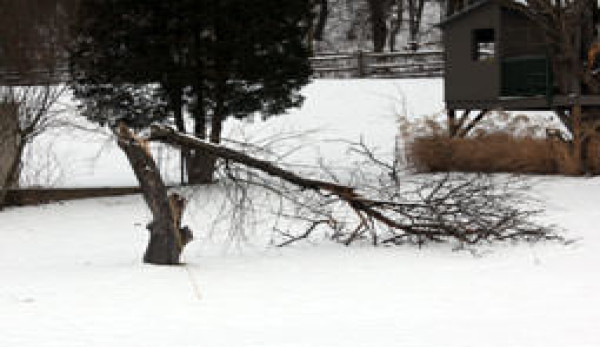 We lost our big, oldÂ apple tree in a windstorm last week. Although the tree was half dead and produced only a handful of fruits, I will miss it. The same woodpecker has nested in a chiseled out hole for the past three years. It was fun each spring to hear the babies chirping away inside and to watch the parents bring insects to their young. I hope they can find a new nesting site somewhere else on the property. Because theÂ chainsaw is currently out of commission, my husband spent Sunday afternoon chopping the rest of the tree down with an axeâ€”an easier task than it would seem, as the trunk was hollow with rot.

Last spring, as I was loadingÂ compost into the back of my car from our municipal compost pile, an older gentleman pulled up and carefully began to fill a few buckets in the back of his car, too. We got to talking as I helped him lift the buckets into his trunk. He told me he was well into his 80s and had gardened for years. His wife had passed away, and he recently moved to a townhouse. His son was going toÂ build a raised bed so that he could grow a fewÂ tomatoes and peppers.

The man mentioned that he used to live â€śup on the hillâ€ť with his family when he was a young man. I asked him on what street, and lo and behold the answer was the very street on which I live. Because there are only eight homes on the street, I asked him which house and he replied 108. My address!

It turns out, he, his wife and their young family built our house in the 50s and had a big, beautiful garden in the back. He asked me a few questions about the house and lots of questions about the garden. Were the privet hedges still there? Was the shed still standing? Is that big pine still in the front yard? Then he told me about planting his fruit trees all those years ago. Were they still there? I would have a different answer now that I did then. The last one has fallen and I wonder what he would think.