Best known for their endurance, Arabians were once the main transportation for the Bedouin tribesmen of Arabia. 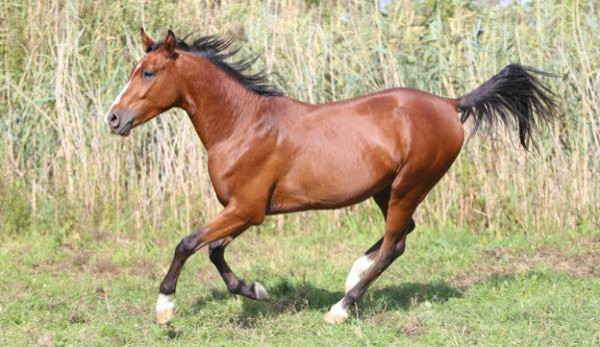 Use: Arabian horses are used in many different disciplines, including dressage, western showing and trail. They are best known for their dominance in the sport of endurance.

History: While many experts believe that the ancestors of todayâ€™s Arabian were domesticated in the deserts of the Middle East centuries ago, no one is completely certain of where the Arabian horse originally came from. His beginnings are mysterious, which seems fitting considering the romance behind the rest of the breedâ€™s history. The first documented breeders of the Arabian horse were the tribesmen of Arabia known as the Bedouins. To these nomadic people who managed to survive in the harsh desert, the Arabian horse was valued above all else. They relied on the horse for transportation and to carry them into battle. To the Bedouins, the Arabian horse was more than just a servant. They viewed their horses as friends, inviting them to sleep in the family tent on cold nights and escape the hot sun there during the day. As a result of this closeness, Arabian horses developed a strong affinity for humans, which lingers to this day. When the Islamic prophet Muhammad ultimately embraced the Arabian horse in the 6th century A.D., the breed became forever etched in human history. Muhammad declared the Arabian a sacred participant in the Holy Wars, and encouraged his followers to meticulously care for their mounts. When Muhammadâ€™s forces invaded Africa, Spain and France, they brought the Arabian horse with them. When Europeans discovered the breed, they recognized its strengths. They crossed Arabians with their heavier horses, incorporating Arabian blood into other breeds in an effort to improve them. The Crusaders also perpetuated the Arabian horseâ€™s influence in Europe by importing them in large numbers and taking the horse around the globe as they spread Christianity worldwide. The influence of the Arabian eventually became such that nearly every modern breed today traces back to this early desert horse. Thoroughbreds, Morgans, Andalusians, Quarter Horses, Paso Finos–these and many other breeds owe their very existence to the Arabian.

Conformation: The Arabian is characterized by a distinctive head with a dished, or concave, face. The head is small and delicate and features large, widely set eyes; small curved ears; and a wide forehead. The Arabianâ€™s back is shorter than that of most other breeds, and his croup is nearly flat. His neck is set on steeply sloping shoulders, giving him a high head carriage. Arabian horses are most commonly seen in grey, bay, chestnut and black, and have long, flowing manes and tails. They usually stand between 14.2 and 15.3 hands.

Special Considerations/Notes: A number of the Arabian horseâ€™s present-day characteristics were bred for by the Islamic people during the time of Muhammad. A feature dubbed the jibbah, which is the bulge between the horseâ€™s eyes, is still present in todayâ€™s Arabians. The breedâ€™s greatly arched neck and high crest, called the mitbah, was considered a sign of courage.