Are Christmas Plants Toxic To Chickens?

Traditional holiday plants such as holly, poinsettias and mistletoe are toxic to humans and pets, but for birds (including chickens) they're no big deal. 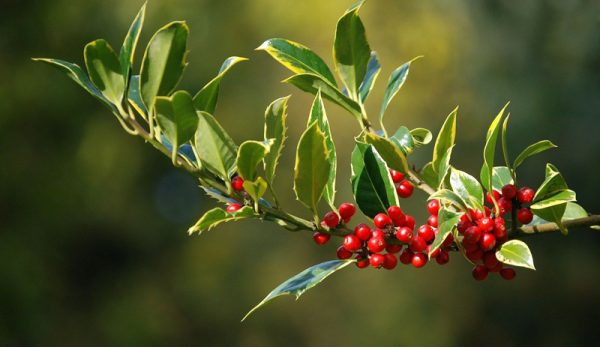 Our household is no different. Jae tackled stringing lights on the shrubs, eaves and gutters at the front of our house. I started the holiday gift buying while decking our halls with bows, boughs of holly and other holiday decor.

And thanks to reminders from our family vet, I made sure that our indoor greenery is festively artificial. Traditional seasonal flora such as mistletoe, poinsettia and holly, of course, have adverse effects on cats and dogs.

However, these plants aren’t poisonous to chickens. They’re perfectly safe for our feathered friends. Here’s a rundown about this trio of festive natural trimmings.

Read more: These 14 toxic plants, however, can poison your chickens!

American holly (Ilex opaca) is a visual standout come wintertime. With its handsome gray bark, its distinctive green leaves and its bright red berries, this ornamental evergreen is almost synonymous with the holiday season.

Due to the way the boughs drape, holly provides winter shelter for many songbirds including cardinals, titmice and chickadees. Besides protection from the elements, holly provides birds with accessible nutritionâ€”its berriesâ€”at a time when the ground is frozen over and insects are impossible to find.

Ingesting holly berries (and, to a lesser degree, holly leaves) can cause vomiting, diarrhea, drowsiness and dehydration in humans and pets. But these juicy berries serve as essential forage for birds.

Planting American holly trees for your flockâ€”you’ll need one male and at least one femaleâ€”may not be practical, as they can reach a height of 50 feet. However, one of the shrubbier cultivars may make an eye-catching addition to your chicken yard.

The Red Sprite cultivar of the deciduous Michigan holly (Ilex verticillata) ranges from 3 to 5 feet in height and grows grapelike clusters of juicy red berries.

Cultivated in Mexico for centuries before becoming an iconic Christmas plant, the poinsettia (Euphorbia pulcherrima) was introduced to the U.S. by Joel R. Poinsett, a botanist who served as the U.S. minister to Mexico under President James Monroe.

For decades, this beautiful plant suffered from a bum rap: the widespread belief that it was dangerously poisonous.

A 1971 research study at Ohio State University, however, concluded that its test subjectsâ€”who ingested unusually large amounts of poinsettia partsâ€”suffered no ill effects. Furthermore, the POISINDEXÂ® Information Service (the primary resource used by poison control centers) states that a 50-pound child would have to eat more than one pound of poinsettia bracts to feel any adverse affects.

Pets who nibble or swallow poinsettia leaves might experience mouth irritation or vomiting due to the plant’s milky sap, which contains latex and can affect those with sensitivities.

Chickens might experience digestive discomfort from munching on poinsettias, but you wouldn’t consider the plants poisonous to them. However, you may wish to avoid surrounding your coop with these festive red and white flowering plants. Their beauty will undoubtedly suffer at the beaks of your inquisitive birds.

The Christmas kiss plant, mistletoe has a long and colorful history. Accounts of this plant date back thousands of years, where it was responsible for the death of the god Balder in Norse mythology and considered a magical plant that granted fertility and luck by the Celts.

Over the centuries, mistletoe has been used to treat such conditions as epilepsy, gout andâ€”ironicallyâ€”poisoning.

This parasitic plant grows on the trunks and branches of deciduous trees. It’s recognized by its small, silvery-green oval leaves and its pearly white berries. It also has the habit of growing in balls called witches’ brooms high up in its host trees.

Mistletoe berries serve as a winter food source for wild birds. And birds return the favor by excreting the seeds and helping the plant spread. In fact, the name “mistletoe” comes from the Anglo-Saxon term for “dung on a twig,” a direct reference to the plant’s relationship with birds.

Besides being a source of nutrition, mistletoe also serves as a choice nesting spot for such birds as house wrens, chickadees, spotted owls, Cooper’s hawks and pygmy nuthatches.

Read more: Check out these recipes for homemade holiday treats your chickens will love.

The same plant that nourishes birds has a dramatically adverse effect on humans … depending on the variety of mistletoe. Many are unaware that two varieties of mistletoe commonly exist: American mistletoe (Phoradendron serotinum) and European mistletoe (Viscum album).

The European variety has a documented history of being highly poisonous to humans and pets. (The plants aren’t poisonous to chickens, of course.) Ingesting the leaves or berries of European mistletoe can cause vomiting, difficulty breathing, shock and even death.

Research on American mistletoe, however, indicates that it is far less toxic than its European cousin.

Most Americans, however, can’t distinguish between American and European mistletoe. So the safest bet for humans and pets is to use artificial mistletoe indoors. Leave the real mistletoe outdoors for the birds who very much depend on it.