I want to tell you about something exciting that happened to us this weekend! It was twilight Saturday night, and Mom was sitting with Uzzi and me, enjoying the cool of the evening. We were all zoned out when Mom said, "What’s that?” 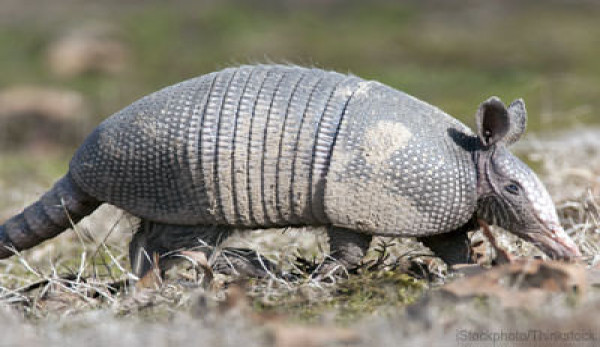 I want to tell you about something exciting that happened to us this weekend! It was twilight Saturday night, and Mom was sitting with Uzzi and me, enjoying the cool of the evening. We were all zoned out when Mom said, “What’s that?” We heard a soft wuffling sound, like the snuffling of a tiny pig, then around the corner of the barn came an armadillo. We stayed real still and on she came. Trailing behind her were four tiny armadillos just like her but softer looking and kind of pinkish-colored. The armadillos shuffled diagonally across our pen and out the other side. It was cool!

Later, Uzzi and I crept in to the house and booted up the computer. We wanted to know more about armadillos. This is what we learned.

Armadillos are New World animals that originated in South America. Today’s armadillos’ oldest ancestor lived about 60 million years ago and was as big as a rhinoceros. Some extinct armadillos were so large that early South American natives used their 10-foot carapaces (that’s their hard outer shell) as tombs or roofing on their homes.

There are still 20 species of armadillos in North, South and Central America but only one in the United States: the nine-banded armadillo. Nine-banded Armadillos came here fairly recently—about 150 years ago—when traveling north out of Mexico. Now they’ve populated the south-central and southeastern states, and they’re still on the move. You can find them as far north as southern North Carolina, Tennessee, Illinois and Indiana. They also live along the Pacific Coast.

Armadillos like to live alone, except when mamas have babies toting along. Both boy and girl armadillos use their strong claws to dig one to 10 burrows about 7 or 8 inches in diameter and up to 15 feet long, where they rest during the day. Then they are out and about in the evening, late night and early morning.

Armadillos mate in June or July, and the lady becomes pregnant, but the egg doesn’t move to the uterus for several months so the babies won’t be born when it’s cold. For about three to four months after that, the egg develops and splits into four identical embryos with an identical genetic makeup, so the resulting babies, called kits, are true clones.

Armadillos eat mostly insects and their larva. Their favorite foods are ants, beetles and termites but also love army worms, cockroaches and yellow jackets. They’re also one of the few animals that dines on fire ants (yikes!), so many people like having them around.

Armadillos can’t see well, but they make up for it in their sense of hearing. Although they are fast, agile runners and good swimmers, they aren’t show-offs and generally move slowly and methodically in a wandering manner. They can even hold their breaths and walk under water across small streams.

A scary thing is that some nine-banded armadillos have leprosy but have no external symptoms and die when the disease damages their internal organs and kills them. According to the University of Florida IFAS Extension, 0.5 to 10 percent of armadillos living in Mexico, Texas, Louisiana and Mississippi have leprosy. Accounts vary, but most sources say humans don’t get leprosy from armadillos—but it’s better not to handle them, just in case.

During the Great Depression people ate armadillos and called it “poor man’s pork” or “Hoover hog.” They’re a favorite delicacy in parts of South America, where their empty shells are sometimes used to make a lute-like instrument called a charango.

Maybe the strangest thing about armadillos is that when startled, they leap 3 to 4 feet straight up in the air. It’s cute to see but bad for armadillos that cross roads—when a vehicle comes along, they jump and get killed!