The yearly armyworm infestations in Texas seem exacerbated by the sudden rainy season, but experts say that isn’t the case. 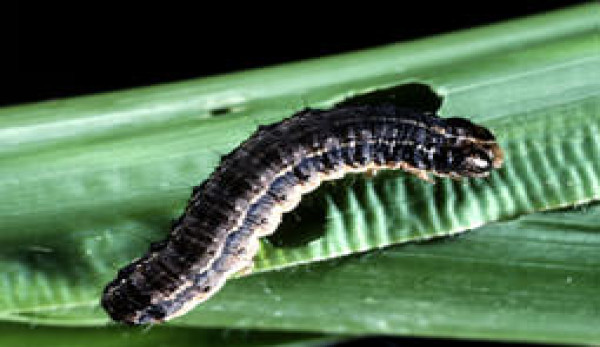 Intense armyworm infestations have continued to consume pastures and hay meadows in eastern and central Texas throughout the fall, an annual problem facing farmers in the region.

Substantial rains, like those much of Texas has experienced throughout the season from hurricanes and tropical storms, often trigger armyworm outbreaks, he says. The perception that armyworms are worse this year is probably because recent years’ dry weather seemed to inhibit their reproduction.

“There was a long period of time when it was dry and there was no armyworm activity. Then all of sudden, here they are in large numbers,” he says.

Knutson said no one really knows why armyworms burst forth in large numbers when it rains following a dry period. But the theory is that armyworm eggs and small larvae survive when humidity is high and plant growth is lush.

“We know that the (armyworm) moths are moving up from South Texas all summer long and no doubt laying eggs, but the eggs and small larvae just don’t survive when it’s hot and dry,” he says.

Now that conditions are ripe for their survival, armyworms will be active until the first cold weather comes in, Knutson says. They will take up residence along the Gulf Coast for winter, then fly to northern states for spring.

“It’ll take a freeze to actually kill them because they’re not cold-tolerant, but certainly cooler weather will slow their development,” he said. “We still are weeks and weeks away from that, so there’s lots of time for armyworms to do damage. It’s too early to hope that weather is going to slow down the infestations.”

Some wheat producers delayed sowing because of reports of armyworms infesting farms in the north, especially in Oklahoma, says Heath Lusty, a Texas AgriLife Extension agent for Jack County, northwest of Fort Worth.

According to Knutson, there’s really no way for farmers to avoid the seasonal infestation of the armyworm.

“Currently, the best management practice is to closely monitor fields to detect infestations early, so control can be taken before significant damage occurs.”