Arrowood Farms Trusts In Brewing Beer From The Ground Up 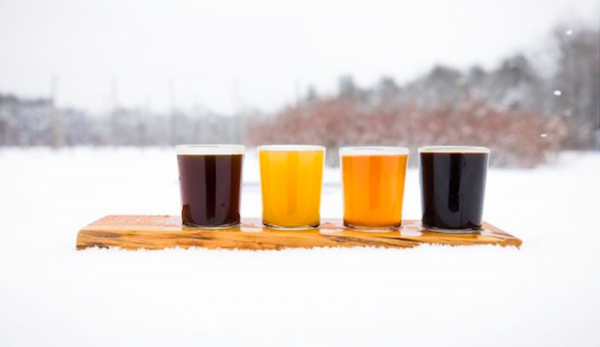 Founded in 2013, Arrowood Farms strives to produce beer from the ground up. Situated in New York’s Hudson Valley, the venture takes a seasonal approach to letting the terroir drive the taste and tenor of its brews.

“The farm came first, in 2013, just shortly after New York State passed its farm brewery legislation,” says co-founder and managing partner Jacob Meglio. “After our first season of growing, it felt natural for us to start brewing beer with our hops. We drafted a business plan in 2014 and built the brewery and tasting room in 2015.”

Taking a moment out from brewing duties, we spoke to Meglio about integrating chaga mushrooms into the beer process and the importance of partnering with other local farms. We also discovered which of the farm’s resident animals are most partial to a brew.

Meglio says that the idea of linking the farm and the brewery was inspired by “nature, tradition and logic.” He explains that Arrowood Farms has been able to tap into a number of “old dairy farms that have been struggling to find a new feasible business model” and integrate them into the brewing cycle.

“We have been able to partner with these farms and give them a new revenue stream while giving us access to wonderful rare varieties of grains to use in our recipes,” he explains.

“This is how beer was traditionally made. And it’s true to the ethos of terroir. When you are enjoying an Arrowood beer or one of our spirits, you are experiencing the land it comes from. You are connecting to the farmers that grow it, the brewers that brew it and the distillers that distill it.”

Read more: Curious to brew your own beer? You can do it! Here’s how.

When it comes to integrating the farm’s terroir into their beers, Meglio says that it’s paramount to “trust the ingredients.” Instead of attempting to “force a brew into becoming what we want it to be,” he explains that the ethos behind Arrowood Farms means that the farm’s freshest and most interesting crops are given the freedom to “take the form they want to.”

Arrowood Farms’ Trickster is a dark seasonal lager that incorporates chaga mushrooms. “Chaga is a slightly rare mushroom that grows on birch trees,” says Meglio. “As far as I know it is not possible to cultivate chaga. It can only be foraged.”

After coming across a large piece of a chaga mushroom while on a hike, the team at Arrowood Farms brewed an experimental mushroom tea. Picking up on how the drink shared similarities to coffee, they realized it would prove a complimentary fit for dark malts.

“The chaga gives the beer a slightly earthy and roasted flavor,” says Meglio.

Read more: Foraged mushrooms are featured fungusÂ  in the beers of Scratch Brewing.

Bringing Bees to the Brews

Spotlighting one of Arrowood Farms’s signature brews, Melgio explains how their Farmhouse Table Beer is “fermented using a mixed culture from our bees, which results in a slightly tart brew.”

Meglio adds that the ale is aged for nine months in an old Hungarian oak chardonnay wine barrel. The process, which helps “really showcase how yeast (and particularly wild yeast), can add some wonderful flavors to beer.”

When the Animals Meet the Brewery

“Pigs like beer,” says Meglio when asked if any of the animals at Arrowood Farms have ever tried to sneak in a sip of any of their beers. “Goats will sometimes like beer (although itâ€™s not good for them). Chickens and ducks not so much. I don’t think I ever tried with the sheep.”

Then he adds, “I can say after years of data collection that no animal likes beer more than humans!”