Artichoke season has started and cases full of the flower buds are showing up in the markets. Yummy! 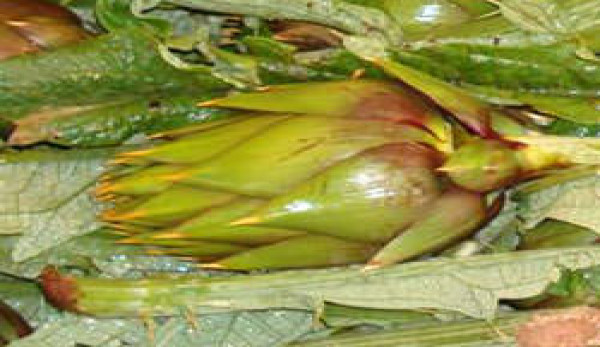 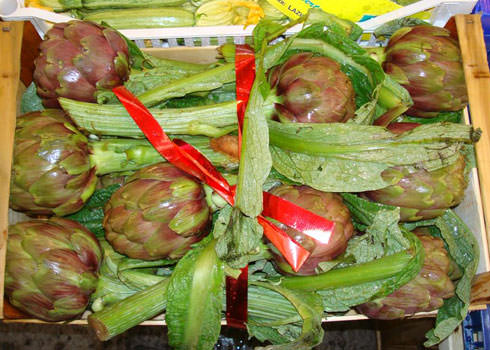 Artichokes, like these non-spiny, globe artichokes, are appearing in the markets of Italy.

Artichoke season has started and cases full of the flower buds are showing up in the markets.┬Ā Yummy! We donŌĆÖt really have the space for a nice artichoke bed in our garden, but weŌĆÖve got a few scraggly plants. They produce a half dozen artichokes every year, but much later on in the season.

The artichokes that are available in the markets now are from Sicily, Sardinia and the southern Italian region of Puglia. In a month or so weŌĆÖll start seeing the northern crop in the markets. These small, local artichokes, called Violetta di Albenga, are extremely spiny and, in my opinion, have a bit more flavor than the bigger artichokes. 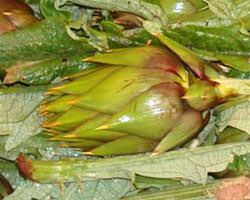 Spiny artichokes are eaten both raw and cooked.

There are two main types of artichokes here in Italy: spiny and not. The spiny artichokes are way less expensive and are generally preferred for the kind of cooking we do. Spiny artichoke preparation is fairly simple: The spiny tops of the flowers are cut off and the remaining core is then chopped into quarters. We eat artichokes both raw and cooked. The raw chunks (soaked in lemon juice) are thrown in salads and cooked artichokes make appearances in vegetable pies and soups.┬Ā

I used to eat a fair number of artichokes when I lived in the States, always by boiling the artichokes, then eating the flower heads one bract at a time dipped in mayonnaise. IŌĆÖve never seen anyone eat artichokes that way here in Italy. A big difference is that we eat the peeled stems in addition to the spines. In the markets, artichokes are always attached to a foot-long stem, and these stems are just as flavorful as the flowers.

The non-spiny artichoke varieties are often used for making stuffed artichokes. Some of these non-spiny, globe types can be pretty expensive. A few growers around Rome even specialize in producing big, purple globe artichokes that can cost as much as 8 euros (or $11 U.S.) each!┬Ā When the flower buds start forming, the growers wrap the top flowers in protective paper caps, but they select only the single biggest flower at the top of each plant. The rest of the artichokes are sold later for a much lower price. Demand is so high for these pampered artichokes that the only way to buy them is to put in an order months ahead of harvest time.

Artichokes originated in northern Africa and came north thousands of years ago. Both ancient Egyptians and Greeks ate a lot of artichokes, and they also complained about the high prices.┬Ā Italy is currently the worldŌĆÖs leading artichoke grower, producing perhaps 40 percent of the world crop. Spain and France are also big artichoke growers. We all export a few artichokes, but mostly the crop is consumed locally. Rome is particularly famous for having a lot of restaurants that feature fancy and expensive artichoke dishes in season. The new surprise in the artichoke industry is the recent appearance of Peru as the worldŌĆÖs largest artichoke exporter.