A husband-and-wife team create a new revenue source by finding the niche market of artisan vinegar. 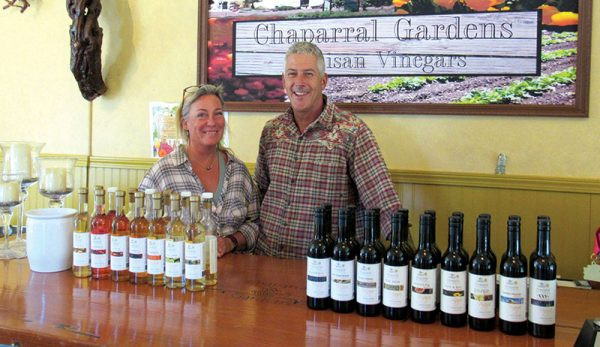 In farming, it often helps to have a niche. Some farmers go into business knowing what theyâ€™d like that niche to be, while others stumble upon it. Craig Clark and his wife, Cari Bourquin-Clark, ought to know, because a bunch of berries ended up putting their small organic farm on the map.

The Clarks own Chaparral Gardens Artisan Vinegars in Atascadero, California. It began with a few bottles for friends and family and went to a line of gourmet balsamic and fruit vinegars known throughout the Central Coast and steadily gaining national recognition.

An Idea Is Born

The Clarks purchased 20 acres in 2001 with the intention of farming. While a substantial portion of their acreage is old oak forest, they farm about two acres, organically. They soon learned that growing organic fruits and vegetables wouldnâ€™t be enough to keep the farm going.

â€śWe started off by planting vegetables, thinking we would be able to pay the mortgage, but that wasnâ€™t panning out,â€ť Bourquin-Clark says. They tried many things such as various farmers markets, a roadside stand, a garden shop that sold garden-themed gifts, and dried herb teas and canned products, along with their produce.

Change came when a neighbor closed his u-pick berry stand midway through the season.

â€śHe let us pick all the berries we wanted,â€ť Clark says. â€śCari had been given a small cookbook from our old, wise neighbors that contained a recipe for raspberry vinegar.â€ť

Using their neighborsâ€™ berries, the Clarks made their first batch of vinegar and gifted it to friends and family at Christmas. It was a hit. Everyone loved it and wanted more. Thatâ€™s when the Clarks made more and tested the market with it. Then, the hard work really began, and with time and patience, their business grew.

The business growth happened organically and slowly for the first few years. The couple wanted to avoid debt, so their company grew one piece at a time with every dime going back into it to buy more fermenting tanks or upgrade equipment.

â€śWe basically had to build a mini winery from the floor up without taking on debt,â€ť Clark says. â€śWe only bought new tanks or equipment after we had saved enough money to make the purchase. We had to plan carefully and figure which piece of equipment was needed more, but weâ€™ve stayed debt-free to this day.â€ť

The couple started in the kitchen of their home, bottling four or five cases by hand with little measuring cups. Once those sold, theyâ€™d bottle some more. This went on for the first year. Then, they used the kitchen of a nearby restaurant, where they could bottle as much as 10 cases at a time once or twice per month. This went on for several years while they converted their barn into a miniature production facility. Once this facility was completed, they were able to complete the entire operation there, including private vinegar tastings for groups.

In the beginning, they used 10 two-gallon glass jars. Slowly, they upgraded to 100-liter stainless steel tanks, buying two at a time, until they had 10. Then, they graduated to the 1,000- and 2,000-liter tanks they currently use.

â€śTo achieve all of this took an incredible amount of time, sacrifice and endless work,â€ť Clark says. â€śWe didnâ€™t have any time off for seven years. We traveled three weekends a month doing several farmers markets, street fairs, festivals and demos from California to New Mexico. Plus, the land always gives us something to do.â€ť

The two of them do all the work by hand.

â€śBeing registered organic means pulling weeds and a lot of hoeing,â€ť Clark says. â€śWe eventually hired seasonal help during harvest, but most of the production is done by the two of us. Itâ€™s extremely labor intensive, so itâ€™s important that you love working the soil.â€ť

All their hard work has paid off. While they still do one seasonal local farmers market in nearby Avila Beach, after their first trade show, they started focusing on wholesale. Their wholesale business is now their primary focus.

While part of the Clarksâ€™ process is proprietary, each batch of Chaparral Gardens artisan vinegar starts with hand-selected, hand-picked fruits, vegetables and herbs grown on their farm that go through a double-fermentation process. They use 300 to 400 pounds of produce for every 1,000 liters of organic Kosher-base vinegar made by a local winery.

The mixture is placed in stainless steel vats, where they add the â€śmother,â€ť which is developed from the original batches and is the fermenting bacteria culture that converts alcohol into acetic acid. The infusion goes through a mild fermentation process and sits for as long as six months. After a couple of more proprietary steps, the flavors are locked in, and the batch is racked and bottled. The whole process takes about a year.

â€śTime and patience are the keys to our success,â€ť says Craig Clark. â€śWhereas many producers rely on commercially made concentrates to flavor their vinegars, we handcraft our creations.â€ť

You can order the Clarksâ€™ creations from their website.

Chaparral Gardens began with just two basic flavors, blackberry and raspberry. Over the years, the company has expanded to offer more than a dozen varieties of fruit or balsamic vinegar. However, creating a new flavor isnâ€™t as easy as it might sound.

â€śOur balsamic vinegars start with a California zin grape, and our fruit vinegars start with an organic non-GMO grain,â€ť Clark says. â€śWeâ€™re focused on bringing out the fruit flavors, because we realize to stay ahead of the competition, we have to focus on flavors. This means several months of taste-testing.â€ť

Besides their original, and still most popular, blackberry balsamic, each year the Clarks aim to produce a new flavor. But, theyâ€™ve found that you canâ€™t force it.

â€śWe have cherries, so we did a 50-gallon vat, only to find out people told us it tasted like cough syrup,â€ť Bourquin-Clark says. â€śWeâ€™ve also found that more than five ingredients tend to muddle the flavors.â€ť

These are just a few of the numerous ways to blend their artisan creations into your own culinary masterpiece. While they never set out to transform the local specialty-food industry, thatâ€™s exactly what they did, and they have the awards to prove it.

â€śWeâ€™ve been fortunate enough to win eight SOFI awards since 2011 and our first Good Food Award in 2017, which helped us go from local to national,â€ť Clark says. The SOFI Awards are like the Academy Awards of the food industry, presented annually by the National Association for the Specialty Food Trade.

Create Your Own Herb Vinegars

You can easily infuse vinegar with some of your own homegrown fresh herbs. Mint, basil, dill, oregano, chives and tarragon may all be used by themselves or in combinations. â€śUse three to four sprigs of fresh herbs or 3 tablespoons of dried herbs for each pint of vinegar,â€ť according to Michigan State University Extension. â€śFlavorings such as berries, lemon peel or garlic may also be added.â€ť MSU extension provides the following steps for preparation:

To test for flavor development, the National Center for Home Food Preservation says to place a few drops of vinegar on plain white bread and taste. â€śIf the flavors are developed to where you would like them to be, strain the vinegar and bottle. If the flavors seem too strong, dilute the flavored vinegar with more of the original vinegar you used in preparing the recipe.â€ť

Always label what you put in your vinegars, and include a note to use the vinegar within three to four months for best quality, including a date on the bottle. Refrigerate to maintain freshness and flavors.

According the NCHFP, as long as you use clean and high-quality vinegar and herbs, the greatest concern with homemade flavored vinegars should be mold or yeast. â€śIf your flavored vinegar starts to mold at any time or show signs of fermentation such as bubbling, cloudiness or sliminess, discard the product and do not use any of it that is left. Some harmful bacteria may survive and even multiply slowly in some vinegars. It is important to follow directions carefully, store flavored vinegars in the refrigerator or cool places, and work in a very clean area with sanitary utensils. Also be sure hands are very clean while you work!â€ť

Chaparral Gardens now produces private-label and bulk-sales business each year, as well as selling vinegar for the public. Without patience and perseverance, the Clarks might not have realized their dream.

â€śEvery endeavor takes hard work and passion,â€ť Bourquin-Clark says. â€śFarming is a lifestyle choice. So many hours are spent tending to the crops with fingers crossed the season will be fruitful. Late frost, rain, wind and drought are all factors we face, but we were never afraid to try new things.â€ť

The vinegar came about by accident, they admit, but the Clarks believe small farms need either value-added products or a niche product.

â€śStart small, test the market, but donâ€™t get stuck on just one ideal, be flexible,â€ť Bourquin-Clark says.

At an annual trade show with big food producers, some call them crazy. â€śWeâ€™re one of only a handful among thousands of producers that grow and produce their own product,â€ť she says. â€śMost co-pack. They never touch the ingredients, much less grow it. But, midway through each summer, we remind ourselves: This is it, the season. We only have so many seasons in our lives. It helps us to be thankful.â€ť

Moira K. McGhee spent many days on her grandmaâ€™s farm. Chasing chickens, being chased by cows and picking tons of vegetables. Now she picks her own crops and chases chickens on a hobby farm with her husband. See what else she writes about at www.moirakmcghee.com.