Inspired by the bees themselves, this artist is painting murals across the country depicting the larger-than-life beauty of honeybees. 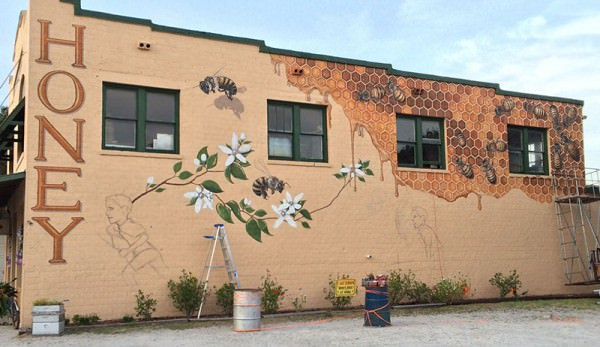 by Rachael DupreeAugust 25, 2016
PHOTO: The Good of the Hive

Artist Matthew Willey has charged himself with a fairly lofty mission: to paint 50,000 bees on walls across the country. Considering he’s only 891 bees into the project, he’s got his work cut out for him.

Willey’sÂ The Good of the HiveÂ mural project got set in motion when a honeybee happened into his New York City apartment. He studied the beeÂ as it slowly made its way across his floor and then stopped, taking its final breath. This sent him into research mode, where he learned about colony collapse disorder and the plight of honeybees everywhere. He also learned about the fascinating phenomenon of honeybees excusing themselves from the hive to die quietly and alone.

With his series of murals he wants to take this tiny insect and make it larger than life, bringing attention to its important role in our food system, pollinating our favorite crops, including squash, cucumbers and tomatoes.

Why 50,000 bees, though? Well, if you’re a beekeeper you know the answer to this question. It’s the average number of honeybees in a healthy, thriving colony.

Currently, Willey’s murals can be seen in LaBelle, Fla.;Â Washington, D.C.; Asheville, N.C.; Seattle; Chapel Hill, N.C. and Durham, N.C. To learn more about what he’s doing and to encourage him in the project, visit him on Instagram, Twitter or Facebook, and check out some of his work below.

Visited the gang @burtsbeesus and spoke about #thegoodofthehive and their Culture Day 2016. Such great people. Lucky to have been a part of their year. #gratitude

Just officially completed the latest mural for #thegoodofthehive @burtsbeesus in Durham, NC. The initiative is at 870 (ish) hand-painted bees as of today! Stay tuned for video of some of the highlights of this incredible experience! #gratitude #bees #honeybees #artstigators

Skateboards, bees and filming… It is going to be a good day. #thegoodofthehive #bees #artstigators

Beelosopher thought of the day… “We’re all drawn toward something. The question is whether we resist that call or bravely fly toward it.” #thegoodofthehive #honeybees #beelosopher

There is a certain cuteness, right? #thegoodofthehive #BurtLivesOn #bees #murals