As the Egg Turns

Photo by Audrey Pavia Mr. Molly and Mr. Mabel are involved in some serious chicken drama. I have long chuckled at the nonsense that goes on between the chickens in my flock. Alliances, squabbles and all-around drama make chicken-watching a great pastime. But this week, I recently found myself more than just observing the shenanigans; […] 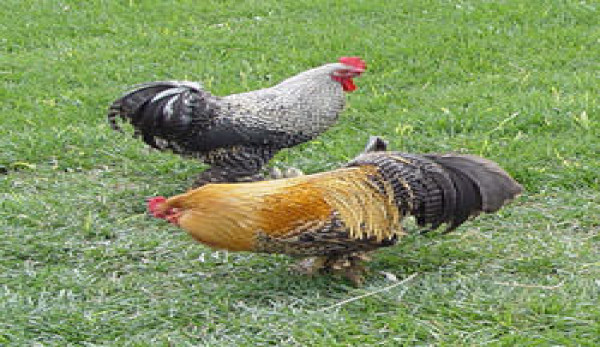 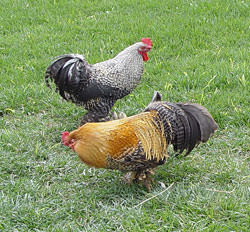 Mr. Molly and Mr. Mabel are involved in some serious chicken drama.

I have long chuckled at the nonsense that goes on between the chickens in my flock. Alliances, squabbles and all-around drama make chicken-watching a great pastime. But this week, I recently found myself more than just observing the shenanigans; I suddenly became involved.

It started with Mr. Molly injuring his leg a few weeks ago. A sweet, gentle boy, he has always been my favorite rooster. I began spending more time with him, medicating him every night, picking him up in the mornings to examine his leg. He never complained, never struggled and never tried to bite me. I really grew to love his kind nature.

So when I noticed the always-aggressive rooster, Mr. Mabel chasing Mr. Molly away from his breakfast every morning, I stepped in. Mr. Molly was fighting off an infection and trying to heal. The last thing he needed was to be chased away from his food. So I began standing in front of Mr. Molly, blocking him from Mr. Mabel, who dare not try to pass me. Little did I know that I had crossed the threshold from chicken-drama observer to participant.

The ugly truth became apparent to me yesterday when I was outside cleaning and saw Mr. Mabel chasing Mr. Molly around on the lawn, for no apparent reason.

“Hey!” I yelled at the nasty rooster. But he ignored me.

So I ran onto the lawn and got in front of Mr. Mabel, forbidding him to pursue the other rooster. Mr. Mabel, never one to back down, came at me with his feathers sticking out and beak open. I walked toward him as he threw himself at my denim-clad legs. I wouldn’t back down, but neither would he. I backed him up all over the lawn as he hurled himself at me. Realizing this was going nowhere, I reached down and grabbed him and held him on his back in my arms. He struggled and tried to bite my hand, but I held him firm until he stopped.

I then proceeded to lecture him, telling him to leave Mr. Molly alone. In the midst of my diatribe, it suddenly hit me: “What am I doing?” I asked myself, in disbelief. Mr. Mabel was staring up at me from his prone position, while the other chickens froze in their position on the lawn, looking at me.

“Let them work it out,” I heard a voice say from somewhere inside my brain. “They are chickens.”

Mortified, I put Mr. Mabel down and let him waddle back to the flock.

This morning, I looked out the window and saw Mr. Mabel chasing Mr. Molly once again, for no reason. It took everything I had to keep from interceding. Instead, I picked up my iPhone and fired up a game of “Angry Birds.”