The Asian Longhorned Tick Is Here To Stay

The Asian Longhorned tick is relatively new to the U.S., but its presence is real cause for concern. Find out what the arrival of this arachnid means for your livestock. 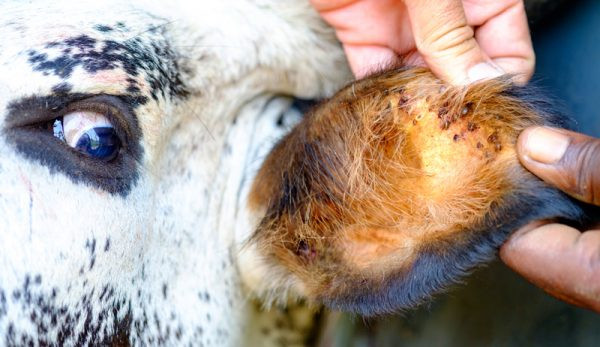 The weather’s warming up here in the U.S., which in many ways is good news. Longer, sunnier days mean more time spent enjoying your animals and the outside.

One downside, however, is that six- and eight-legged pests feel the same way. As spring warms to summer, bugs abound.

And while we’ve covered ticks/flies/mosquitoes before, there is a major update hobby farmers in the U.S. should be aware of. A new tick species has arrived in town.

Read more about how you can control ticks on your livestock.

The Asian Longhorned tick is an interesting and scary example of how rapidly a new pest can spread across the country.

Most recently identified in the U.S. on a sheep in New Jersey in 2017, investigators now conclude this tick has been present in the US since 2010. This is based on a re-examined sample of another unidentified tick from West Virginia.

This tick species is native to eastern China and Japan. It is now an established invasive species in Australia and New Zealand.

While epidemiologists aren’t yet sure how this tick got to the U.S., since the case from New Jersey in 2017, it has been reported attached to numerous species of wildlife, livestock, companion animals and humans from Connecticut to North Carolina and as far west as Arkansas.

What makes the enlarging geographical range ominous of the Asian Longhorned tick are two things.

First, in other countries, this tick species is known to spread various bacterial and viral diseases of both livestock and man, including anaplasmosis, babesiosis and ehrlichiosis. These are all diseases that create chronic conditions of lethargic and sometimes anemic animals that donâ€™t grow or gain weight well.

Although none of these ticks in the U.S. have been identified as vectors of anything yet, experts acknowledge there is precedent and potential for them to easily become vectors.

Second, this tick can reproduce without a male. This process is called parthenogenesis and, I’ll admit, cool from a biological aspect. What is means, though, is a single tick can create an entire population.

Not all tick species have the ability to reproduce like this.

Another worry, as if we need one, is this tick is a voracious blood feeder. Cases of extensive blood loss due to heavy infestations in other countries have been reported.

So what does this mean for hobby farms from both the human and veterinary sides of things?

For yourself and family members, follow the CDC’s guidelines on tick bite prevention. They are the same no matter what tick species you’re dealing with.

For your animals, keep up with your tick control strategies that you’ve implemented on your farm. Guidelines will vary depending on the types of animals you have and how/where they are housed.

Regardless of what livestock you raise, if you see a tick on your animal, remove it. If interested, talk to your vet about how and where to send it for identification.

For larger groups of livestock, watch for signs of infestations. These include:

Also keep your veterinarian up to date on what you’ve observed on your property. Although this new tick isn’t going away any time soon, we, too, can adapt and control its impact on our animals.