Martok the goat gives advice on what to do if your farm dog comes in contact with a snake. 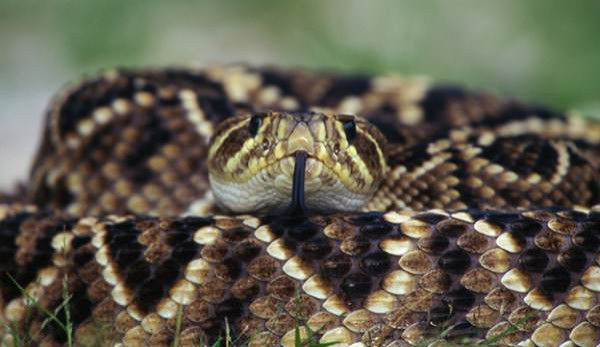 There are snakes on our farm, and I worry about my dog getting bitten. What can I do to avoid it? And if a snake bites my dog, what should I do?

Most snakes aren’t poisonous, and some snakes help out your hobby farm by eating rodents in your barn and garden. We have snakes on our farm, and we like them!

However, according to â€śTreatment of Snakebite in Field Dogs,â€ť by Terry Terlep, DVM, about 15,000 dogs and cats are bitten by poisonous snakes every year. In dogs, 70 to 80 percent of bites occur on the face and head and 20 to 30 percent occur on the legs. About 80 percent of snakebites are caused by rattlesnakes; water moccasins, cottonmouths and copperheads cause the rest.
The good news is that of the 36 species of snakes in Arkansas (where I live) only six are venomous. This is typical of many states. Far-north states, like Maine, Michigan, Minnesota, North Dakota and Washington, have even fewer than that. To find out which venomous snakes live where you do, check out Venombyte.com.

The best way to help yourÂ farm dog avoid snakes is to keep it away from places where snakes like to be. Expect to find snakes underneath or beside logs, rocks and debris; along fencerows; and in or under wood or brick piles. During the hot summer months, snakes are most active at night, so if you’re out and about with your dog in the evenings, carry a flashlight. In late fall and early spring, snakes bask on rocks or in patches of sunlight to warm their bodies, so they tend to be more active during the day.

Keep your dog on a leash when you take it where snakes are likely to be, and don’t allow it to poke its nose into holes in the ground or to dig under logs, rocks or boards.

If you’re with your dog when itâ€™s bitten by a snake, note the snakeâ€™s color and size, but don’t try to kill itâ€”it might bite you. If you’re familiar with snakes and you’re certain the snake isn’t poisonous, wash the wound with soap and water and watch to make certain it doesn’t become infected. If you don’t know if the snake is venomous, err on the side of caution and rush your dog to the veterinarian. Carry it to the car if you can; restricting movement helps keep the venom from spreading. Call ahead to make sure your usual veterinarian has snakebite antivenin on hand; if he doesn’t, ask him to direct you to a vet that does. Keep your dog calm and immobile. Don’t apply a tourniquet, slash the wound, or apply ice or any other type of wound dressing. And don’t give it aspirin or pain reliever; just get it to the vet.

If your dog comes home with unusual swelling anywhere on its body or if itâ€™s unusually restless, breathing erratically, drooling, weak or disoriented, it might have been bitten by a poisonous snake. Quickly examine it for fang marks, especially on the face or legs. (Harmless snakebites are U-shaped, and there are no puncture marks from fangs.) Marks can be hard to find, especially on long-haired dogs, so if in doubt, don’t delay. Get moving. Time is of the essence, especially if your dog has been bitten on the face.