Along with rhubarb and ramps, asparagus is in full-blown season here. Those gardeners who have patiently waited through three seasons of feathery ferns are rewarded by lots of fat purple spears. 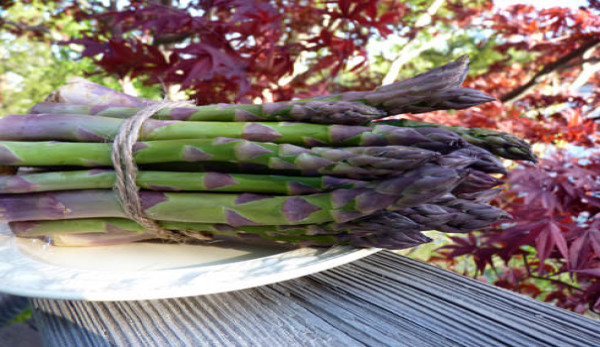 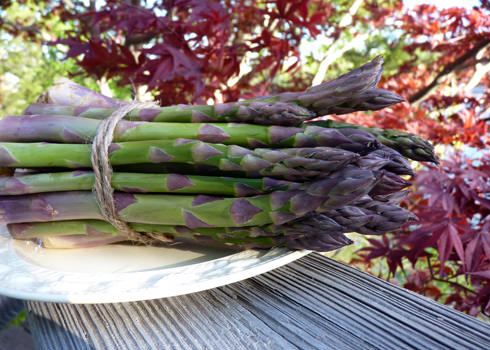 Eat these beautiful asparagus spears simply steamed, or dress them up fancy.

Along with rhubarb and ramps, asparagus is in full-blown season here. Those gardeners who have patiently waited through three seasons of feathery ferns are rewarded by lots of fat purple spears that grow so oddly, pushing straight up from the beds, and endure for years when well-established.

Itâ€™s my private ritual to harvest two wild spears, which grow in an unlikely spot along a chain link fence. But thatâ€™s nowhere near enough. Apparently, my neighbors feel the same way. At the farmers market last weekend, a grower told me that his 60 bunches sold out by 10:30 a.m.

Some people favor the pale, lavender-white asparagus spears, so popular in Europe and now grown domestically. Some like the thickest pieces and when theyâ€™re very fresh and juicy, like now. (The fat ones are just as flavorful as the thin to my mind.) I prefer these thinnest green asparagus spears. I was recently served one lightly pickled, skinny spear as the garnish of a well-spiked Bloody Mary. Great idea!

Frankly, I donâ€™t think you need much of a recipe to prepare these delicacies. If you donâ€™t already know it, the trick to trimming them is to bend the spears until the woody end breaks off at the tender point. Then just steam the spears in one layer in a large sautĂ© pan, in or over an inch of water, until they are toothsome, and season with salt, fresh pepper and a squirt of lemon juice. I donâ€™t even need butter on them.

Asparagus spears are also deliciously and easily roasted: Roll in olive oil, then roast 10 minutes or so in a 400-degree-Fahrenheit oven, turning them over once. Afterward, you can dress them with a mustard vinaigrette or, as my friend does, a soy-mint-sesame-seed combo. Other delicious dress-ups for asparagus spears are sprinkled fresh goat cheese, chopped egg and dill, or diced, sautĂ©ed garlic mixed with parsley, capers and anchovies.

If you want to celebrate asparagus with more elaborate treatment, it responds beautifully, as well. Mixed with eggs, cream and Gruyere, asparagus becomes a quiche filling. With bĂ©arnaise or other cream sauces, it somehow becomes old-fashioned and richly formal. Chopped, it can delicately flavor a spring risotto: Add 2-inch, uncooked pieces to the rice with white wine and good Parmesan. Or you can impress guests by rolling each spear carefully in puff-pastry dough or filo leaves and baking the â€ťcigars.â€ťÂ

For an elegant and healthy entree, lay white-fish filets, such as sole or flounder, in a baking dish on top of a layer of asparagus. Then moisten the filets with some butter and a sprinkle of white wine. Bake it all at 375 degrees, covered for 10 minutes and an additional three or four minutes, uncovered. Before serving, strew the fish with chopped dill, chives or tarragon. Serve with buttered new potatoes.

Asparagus is a strong example of the vibrancy of a locally grown treasure. Yes, we can find it year-round from far-away places, but for a brief, urgent period, asparagus pokes up boldly in the Hudson Valley, in all their purple-highlighted, matte-green glory, juicy with their unique flavor.