Nick Hoefly of the New York City-based Astor Apiaries tells us how he turned a beekeeping hobby into a successful business. 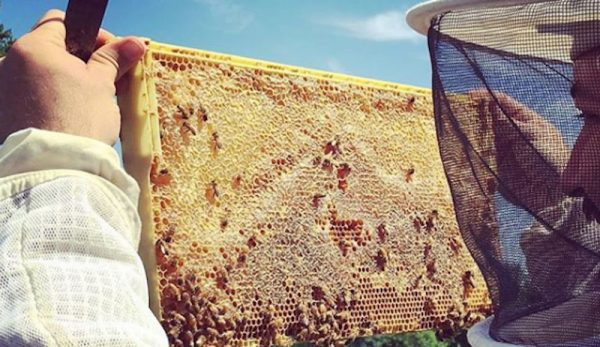 When Nick Hoefly became a new homeowner, he set his sights on starting “something like a garden in my tiny city yard or on my roof.” After batting around some ideas with a friend, the possibility of bees came up.

“It was kind of an abstract thing that I didn’t really think was possible,” says Hoefly, who’s based in Queens, New York City.

After Hoefly chanced across the crowdfunded Flow Hiveâ€”which introduced a new hive designâ€”he began keeping bees as a hobby. The interest quickly bloomed into Astor Apiaries, an urban beekeeping venture focused on producing raw honey and beeswax sourced from bees all around New York City.

We spoke to Hoefly about the dynamics of urban beekeeping and how to turn your passion into your business. He also revealed how he uses a special bee vacuum during hive rescue missions.

We're on the hunt for a new bee yard in eastern Queens. Who's got a lead for us? Ideally, we're looking for an easy access rooftop or green space(cemetery, community garden, etc.) to set up 6 or more hives. Honey share, hive tours and more available to the property owner, organization and/or occupant of the space. This is an excellent zero cost opportunity for a green initiative for businesses or organizations as well. Message us here on Instagram or email nick@astorapiaries.com. —- #astorapiaries #urbanbeekeeping #nycbeekeeper #nycbeekeeping #nycbees #queensbeekeeper #queensbeekeeping #queensbees #greeninitiative #greenspace #lookingforspace #honeybees #rooftops #cemeteries #communitygardens #nyc #queens

Hoefly says that the skills needed for urban beekeeping are similar to those used in more rural settings. But there are a few considerations that come with tending to a hive on a rooftop or cramped back yardâ€”not least being a good neighbor in high-density environments.

“Urban hives are in relatively close proximity with neighbors and the general public,” he explains. “This means we need to be more vigilant in managing hives to avoid swarms and other behaviors that may cause panic for neighbors.”

The Pros and Cons of Rooftop Beekeeping

?Busy bees are determined, they know they have a very important job to do, BUT they focus on one flower at a time to get the most out of each moment.âŹłâ € More information, link in bio.

Hive location is key when it comes to urban beekeeping. Rooftops are a popular choice, but Hoefly warns that one of the drawbacks is the “risk of falling” when you’re up on a roof or perched on a ladder.

“There’s also the fact that hive boxes coming off a roof are generally much heavier than when they went up,” he adds. “Honey is heavy and can pose a serious danger if you haven’t thought about how you’re going to get it back down to the ground.”

On the positive side, a rooftop hive location avoids dealing with “many of the pests that can devastate hives in the country” and ensures there are “no worries about large predators like bears and skunks.”

Hoefly adds, “We also have little to no small hive beetle, which need to leave the hive as larva and pupate in the ground. They then climb back into the hive and make a mess. They are not able to do that on the rubber of the roof.”

Inside a Bee Rescue Mission

Doing our first bee rescue in Staten Island today! This open-air colony had been here about a week and had already built two beautiful clusters of white comb. The first was about the size of a basket ball and the other about the size of a small beach ball. The queen is already laying eggs and there was a good amount of nectar stored. Going to bring them to one of our yards and feed them up to get them settled and ready to prepare for winter. â€”â€” #astorapiaries #urbanbeekeeping #nycbeekeeper #savethebees #beerescue #swarm #catchingswarms #honeybees #beekeeping #nycbeekeeping #nycbees #statenislandbees

Along with running Astor Apiaries on a day-to-day basis, Hoefly often embarks on bee rescue missions. These can take several forms, with swarm catching being the most common.

“Collecting a swarm involves containing a colony of bees who are actively looking for a new home,” says Hoefly. “If we provide them a suitable homeâ€”like a hive box with combâ€”it’s a fairly easy process.

“The key is to get the queen into the box and then wait. Her pheromones will draw the rest of the swarm to her location. It’s still an incredible sight for me to watch thousands of bees march into a hive box to join their queen.”

Learn how you, too, can capture a honeybee swarm.

Bring out the Bee Vac!

Always love catching an emerging bee. Saw some emerging in Brooklyn this morning and this one in Queens this afternoon. Did you know that when a bee emerges, its first task is to clean its own cell? Bees are clean freaks, which is why the inside of a hive is one of the cleanest natural environments in nature. â€”â€” #astorapiaries #nycbeekeeper #newbee #beekeeping #urbanbeekeeping

For more difficult bee rescue missionsâ€”such as where the hive might be nestled in a location that makes it difficult to locate the queenâ€”Hoefly likes to break out “a low-powered vacuum called a bee vac and literally suck up all the bees into a bucket or box.”

He admits the tactic might “sound rough,” but he adds that using a bee vac “allows us to quickly and gently remove the bees and get them into a safer location.” After that, the colonies are established at one of Astor Apiaries’s beeyards around the city.

Getting Involved with Beekeeping

“Beekeeping is an incredibly rewarding hobby,” says Hoefly. “It’s not for everyone and takes a serious commitment, both financially in the beginning and in learning over the entire life of your hobby. So I always recommend that people test out the waters before they jump in.

“Take a class or even a full course, [and] see if you can find any opportunities to visit a hive or shadow a beekeeper. Even if you don’t have bees, join your local beekeeping club and attend meetings.”

If you decide to enroll in the beekeeping ranks, Hoefly advises getting to know a beekeeper or two who can provide mentorship.

“It’s easy to make costly mistakes in the beginning, and a mentor can steer you around those tripping points,” he says. “Beekeeping is not a hobby to start lightly. But if you find it to be a passion, you will not be disappointed.”