At In Loving Swineness in northwest Florida, Christal and Frank Ellard capture and employ feral pigs to clear farmland of invasive grasses. 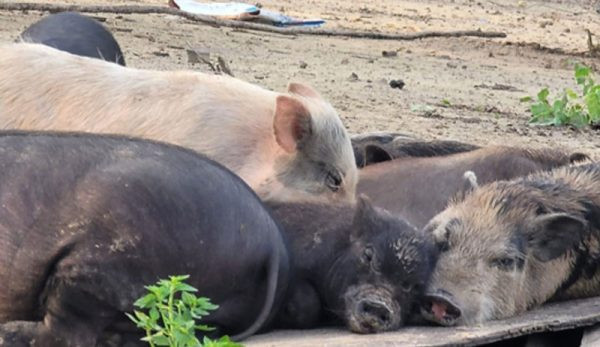 Christal and Frank Ellard are anything but ordinary. For years the couple has been involved in both agriculture and rescue. Combined, the pair has raised countless children (in addition to their four biological kids). Frank is retired military and learned a lot during his time serving. Â

When Christal became involved in a local rescue of feral mini pigs, their lives took a dramatic turn. The Ellards had raised poultry for yearsâ€”everything from Seramas to Cornish Crosses. They were not new to livestock, so it only made sense that they would help capture these pigs.

However, this move quickly grew a rescue from the ground up, and In Loving Swineness was born! Christal found that pigs smaller than large meat hogs can still offer invaluable uses to their keepers. As feral animals, these pigs are highly destructiveâ€”a huge issue when dealing with feral populations. They will destroy lands and wreak havoc on farms everywhere.

But Christal realized this troublesome trait can actually be put to use for beneficial outcomes.Â

Read more: Pigs will upcycle almost anything into nutritious food!

Cogongrass is a major noxious weed that chokes out other native plant species. Due to its high silica content, native wildlife cannot eat it. With cogongrass replacing edible native plants it could potentially wipe out entire food systems.

Kudzu is a more well-known weed and, for its part, can be eaten.Â

The primary treatment for both? Toxic herbicides. But Christal quickly discovered her rescue pigs did an amazing job of quickly ridding areas of these invasive weeds, no chemical necessary.Â

Though not as efficient grazers as ruminants, pigs will eat grassâ€”not cogongrass, of course, but they’ll chow down on some kudzu. But by rooting around (a trait feral hogs aren’t typically celebrated for), pigs will clear the land around them of both of these invasive grasses.

Christal has found that pigs can clear land in as little as a week’s time.Â And by using rescue hogs to clear land, Christal effectively eliminated the need for chemicals typically used to kill Cogongrass.

The land does not need to clear the herbicide from the ground, clearing the way for immediate planting!Â

In addition to foraging, the Ellards’ pigs are also fed produce not fit for human consumption, donated by local produce companies. This helps reduce the local waste system of their area!Â

In Loving Swineness works by finding individuals who need their land cleared of invasive grass and weeds. Then, they move the pigs to the land. In Loving SwinenessÂ pigs are entirely portable, with electric fencing, portable buildings and a camper for Christal and Frank to live in.

The pigs will take a month to a couple of months to do the job, depending on the size of the area.

Read more : Here are the whens, whys and hows of pasturing pigs

This system has not been without hiccups. Escaped pigs, wrecks and hurricanes are only a few of the problems In Loving Swineness has faced.

Recently, while moving to a new property, their horse trailer containing half of their pigs was rear-ended, completely totaling it. This may just be the straw that breaks the camel’s back for In Loving Swineness. The non-profit was already stretched thin with resources and labor, and now Christal is debating shutting down the rescue. They have even begun rehoming hogs with the help of others. Â