Photo courtesy of Jengod/Wikipedia The June bug that went after me last weekend looks just like this one. This spring, my sister, Cyndi, came to visit me from the island where she lives in the South Pacific. While I was at work one day, she planted a garden of tomatoes. Now, four months later, I […] 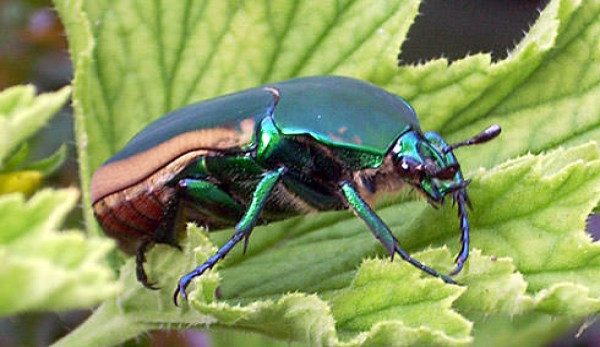 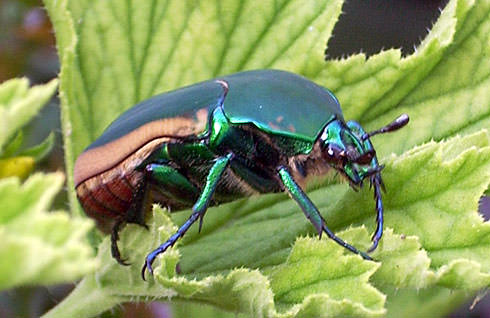 The June bug that went after me last weekend looks just like this one.

This spring, my sister, Cyndi, came to visit me from the island where she lives in the South Pacific. While I was at work one day, she planted a garden of tomatoes. Now, four months later, I have bushels of the luscious red fruit.

Today I was outside picking some tomatoes, tossing the overripe ones to my chickens and placing the good ones in a bag, and as I bent over the plants with my face deep into the leaves, I heard a loud buzz. Suddenly, a giant, green figeater beetle â€” which most people call a June bug â€” flew into my face.

Although I’m an urban farmer, I’m rather squeamish when it comes to giant bugs (potato bugs scare me nearly to the point of passing out). When this big, green buzzing thing flew right at me, I screamed like a little girl and ran like hell.

I dashed across the patio and didn’t stop until I no longer heard the buzzing. Assuming the scary creature was gone, I went back to the garden to pick up the tomatoes I dropped in my haste to escape. No sooner did I bend down to pick them up did I hear the loud buzzing again. I looked up and the beetle was hovering in front of my face, looking right at me.

I dropped the tomatoes again and ran. But no matter how far I ran from the tomato garden â€” which I decided the beetle must be guarding â€” the bug was close behind. It wasn’t until I reached the back door that the beetle flew away.

As I paused to compose myself, I noticed that my chickens were all on the lawn, staring at me. The dogs, Nigel and Olivia, were also looking at me, perplexed. The horses were ignoring me â€” they had hay in their feeders â€” and it would take more than me running from a bug to get them to notice.

Mortified by the aggression of this insect, I went in the house and did an internet search for June bugs. I found out that the species where I live, in the Southwest, is called a figeater. I failed to find anything about these beetles being aggressive and chasing people. All information I found on June bugs and chasing involved the bugs being chased, not humans.

I also discovered that chickens eat June bugs. I found stories about hens pursuing June bugs all over the yard until they catch them. My chickens have no interest in them. It’s probably because I have bantams; to them, these bugs look like behemoths.

The moral of the story is that Iâ€™ll have to find some environmentally safe way to deal with this figeater, who has laid claim to my tomatoes. Either that or go out and get some normal-sized chickens.