A teenage visionary created a flourishing farm in Oklahoma. The young hobby farmer feeds her family and, by donating the profits, helps others, too. 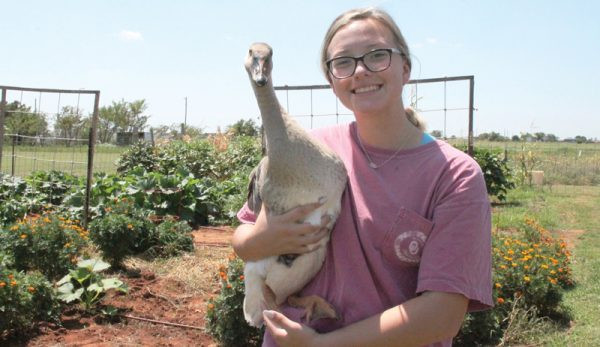 Audra Owenâ€™s grandmother worked her garden with 6-year-old Audra playing around her. Thatâ€™s when Audra decided to become a gardener. So, Audraâ€™s dad Matt helped her create a 4-by-4-foot garden to grow tomatoes.

A few years later, the family relocated to 8 acres on Oklahomaâ€™s rural Canadian County prairie. Audra planted flowers to pretty things up near their house. But again, she wanted a garden.

But Audra, the young hobby farmer, nurtured bigger plans for the eggs.

Regenerative agriculture heals the land on this California family farm.

Two years ago at a local farmers market, the family noticed a seed company giving away seeds for unusual vegetables. They loaded up boxes of seeds and took them home, where Matt helped Audra plant them.

Audraâ€™s hobby farm became so huge that her brother, Talan, now a 14-year-old eighth grader on the middle school football team, began helping with the grunt work. On school days, these teens are up by 5:40 a.m. to care for the animals and plants, and then off to school.

Pretty much in charge of the familyâ€™s agricultural projects, Audra and Talan keep things running but with help from dad and mom.

When Matt has time, he helps with the farm endeavors. But when heâ€™s unavailable, his wife Catherine (â€śCatâ€ť) helps the two teens.

â€śEveryone has their own job,â€ť Cat says. â€śIâ€™m the cook. They grow it, and Iâ€™ll cook it. Weâ€™ve tried a lot of new things we can eat out of the garden. We consume about half of what we grow. We can a lot and freeze our strawberries, blackberries and peaches.â€ť

Read all about chicken manure compostâ€”what does and how to get it.Â

For the past few years, Audra has used social media to sell eggs, vegetables, and homemade jams and jellies. She donates all the funds for children to attend church programs.

She and Talan donâ€™t keep any earnings.

Bo mothers all the chickens. He gets into the pens and counts them. The horsesâ€”Pancake and Babyâ€”spend their days in a fenced pasture.

Audra is now a 16-year-old high school sophomore who watches Netflix from the couch. But the young hobby farmer is also a high-energy agricultural entrepreneur who has generated farming ideas for 10 years.

Their hobby farm produces most of the familyâ€™s meals. Audra experiments with her produce, and sheâ€™s now trying to dry vegetables while researching duck eggs.

And sheâ€™s still selling chicken eggs, produce, and jams and jellies, while giving away all her profits. In 2018, she gave away more than $400, which is exactly what she wanted to do!

This article originally appeared in the May/June 2020 issue of ChickensÂ magazine.

A historian, author and photographer, Carol Mowdy Bond earned her bachelorâ€™s degree in history from Oklahoma State University. As native Oklahomans and members of Choctaw Nation of Oklahoma and Choctaw Nation Artist Registry, Carol and her sister comprise an art, photography and writing teamâ€”Chahta I Tek Tukloâ€”online at www.twochoctawsisters.com.