Blue-banded bee pollinates by hitting its head against the flower up to 350 times per second. 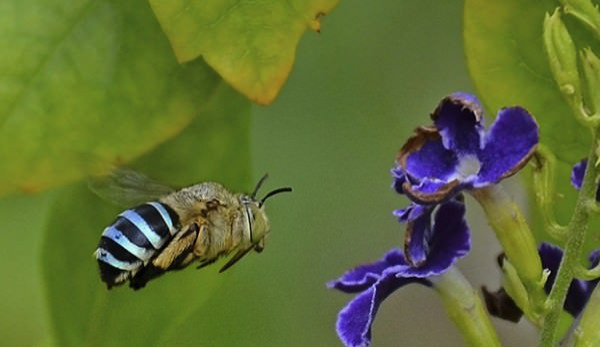 ItŌĆÖs a headbangerŌĆÖs ball for the blue-banded bee native to Australia. Scientists recently discovered that the bee “vibrates its head rapidly when visiting flowers,ŌĆØ┬ĀLive Science reports. As part of their research, scientists used audio recordings and high-speed video to compare the pollination techniques of the blue-banded bee and the North American bumblebee when it came to tomato plants.

With the audio they found that the blue-banded bee “buzzed at higher frequencies than the bumblebees.ŌĆØ The video, however, showed that the blue-banded bee “would rapidly ŌĆśbangŌĆÖ its head against the pollen cone at a very high rate of speed, calculated by the scientists to be 350 times per second.ŌĆØ According to Live Science, none of the scientists conducting the study had ever seen such a thing before and were surprised to have discovered it. Using this technique means the bee spends less time at each flower because the technique “work(s) well to break up clumps of wet pollen [and] could also dislodge more pollen overall.ŌĆØ

The study was published in the journal Arthropod-Plant Interactions. Click here to read it in full.