Avoid Giving These Toxic Foods To Your Chickens

It's fun to give chickens scraps and other treats, but watch out for these foods and other substances that are toxic to birds. 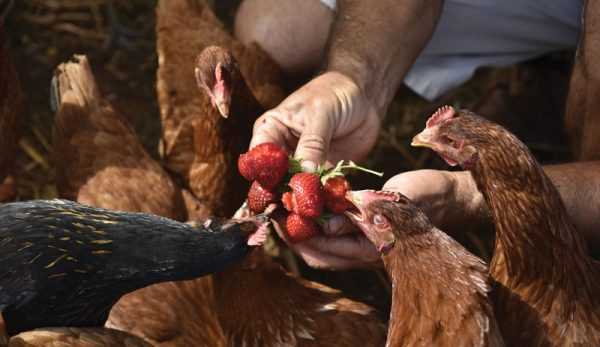 Feeding our chickens treatsãin small amountsãof fruits, vegetables, kitchen scraps and other ãhuman foodã can provide them with valuable environmental enrichment while supplementing a diet of commercially available formulated feed. While many common foods may seem nutritious or safe to consume for humans, they may be harmful or deadly for our feathered friends.ô

This article focuses on common foods toxic to chickens. We’ll also look at what to do when one of your birds eats something toxic, as well as nontoxic alternatives.ô

A toxicant is a substance, either naturally occurring or human-made, that is injurious in some way to a living organism. Toxins, on the other hand, are toxicants specifically produced by an organism (animal, plant, fungus, etc.). ô

This means that we have to consider the food itself when making decisions about feeding chickens, as well as the environmental factors and additives affecting the food.

Read more: Cool things down in the coop with these safe, tasty chicken treats.

What Did It Eat?

Itãs not possible to know if a particular toxicant is affecting a bird from clinical signs alone. But checking on your flock frequently and making note of changes in a birdãs behavior may help catch a problem before itãs too late.

Some common clinical signs of poisoning include:

Further complicating the list is the reality that the clinical signs listed can also be associated with infectious disease and diet.ô

The bottom line: As soon as you notice a change to the health and wellbeing of one or more birds in your flock, contact your veterinarian. Additionally, provide supportive care for the affected member(s) of the flock by isolating them in a safe, warm place with easy access to food and water.ô  ô

A lot of foods that we eat and consider healthyãavocado and almonds, for exampleãcontain compounds that are toxic to chickens. Processed foods may appear to not have any toxic ingredients but often contain harmful or lethal levels of salt.

Sometimes only parts of food that we discard when cookingãstems, leaves, shells and pitsãare toxic to chickens while the rest are fine.

The list of individual foods that are toxic to chickens is too long to list here individually, so below we broke foods up by the type of toxicant they contain.

Persin is present in the fruit, skin and pit of avocados. You’ll also find it in the leaves and bark of avocado trees. Many bird species, including chickens, are very sensitive to persin. Donãt allow your birds access to any part of the plant.

This group of toxins is produced by molds (mycotoxins), particularly by Aspergillus spp. and some species of Penicillium. Commercially available feed ingredients, such as corn and soybeans, as well as finished feedstuff in storage can be contaminated with one of these molds.ô

Nuts are also common sources of aflatoxins, particularly peanuts as they age or mold. Aflatoxins are toxic to humans as well as chickens. Contaminated feed can transmit aflatoxins to eggs and chicken meat, so monitoring what we feed our chickens for signs of potential aflatoxin presence is very important.ô

Feed with visible mold should always be avoided, but mycotoxins can be present even without obvious mold growth. Feeding fresh feed stored in a dry area can help avoid aflatoxicosis.

Fortunately, the USDA tests foods that may contain aflatoxins, including grains, peanuts and peanut products. Still, checking foods and commercial feed for signs of mold before feeding your flock is an important measure in avoiding aflatoxicosis.

Signs of aflatoxicosis include loss of appetite, loss of motor control, convulsions, depression and death.

Read more: Check out these 5 treats to keep your backyard chickens happy!

There are many types of ã-cidesã including insecticides, herbicides and rodenticides used in food production and in residential settings that can cause toxicosis in chickens.ô

Produce can contain amounts of these compounds on their surfaces. Therefore, thoroughly wash these foods before feeding them to your birds, especially if you are feeding them the peel. In addition, chickens should be kept away from areas recently treated with pesticides.ô

There are a number of rodenticides used for rodent control including anticoagulant rodenticides, bromethalin and vitamin D. For example, chickens might directly ingest rodenticide baits resulting in poisoning.

Use appropriate bait stations to avoid direct access to baits by birds.ô

While clinical signs vary depending on the compound used, weakness, diarrhea, convulsions, loss of motor control and respiratory distress can occur in cases of pesticide poisoning.

Clinical signs of rodenticide poisoning might not appear right away. Anticoagulant rodenticides can cause weakness and loss of appetite but can also cause death without clinical signs. Other types of rodenticides may cause seizures, loss of motor control, partial paralysis, behavioral changes and hypercalcemia (increased levels of calcium in blood).ô

The pits of stone fruitsãincluding apricots, peaches, plums and cherries, as well as apple seeds, elderberries and almonds (which is itself a kernel of the almond fruit)ãcontain amygdalin, a cyanogenic glycoside. Amygdalin breaks down into hydrogen cyanide when digested and can lead to cyanide poisoning.ô

Chickens that have ingested a lethal dose of amygdalin-containing food will typically die within 15 to 30 minutes. Therefore, carefully remove all parts of the pit or seeds when feeding these fruits to your chickens and ensure your chickens donãt have access to the cyanogenic scraps of these foods.

This is found in processed foods, canned foods and human prepared foods.ô

The recommended level of salt in a poultry diet is 0.2 percent by weight, or around 1 milligram per day depending on the weight of your bird. This amount of salt is already accounted for in commercial feed.

Even small increases in salt can cause salt poisoning. So take care when feeding prepared foods to your birds.ô

If you suspect salt poisoning, remove water and feed sources and gradually replace them with increasing amounts of fresh water from a non-contaminated source over a few hours. Immediate unrestricted access to fresh water may cause brain damage. ô  ô

Ensuring your flock always has access to fresh water can help prevent hypernatremia. This is especially important on very hot days when water evaporates more quickly and on cold days when water may freeze.

Solanine and solaninelike compounds are present in the plant stems, leaves and flowers of nightshade family fruits and vegetables. Green or spoiled potatoes and green tomatoes also contain solanine.

Eggplant and pepper fruits donãt contain solanine and are safe to eat. Additionally, red pepper can provide some benefits in terms of egg quality and yolk color. (Donãt worry. Chickens donãt taste the spicy capsaicin like humans do.)

If you do decide to feed your chickens any of these nightshade family fruits, remove any stems or leaves from the fruit.ô

For potatoes, peel to ensure the potato is not spoiled or green and to remove the solanine-containing peel. Then remove any sprouts (ãeyesã). Solanine affects the nervous system and gastrointestinal tract of chickens, causing loss of motor function, GI distress, respiratory distress and in some cases death.ô  ô

Ingestion of parts of these plants can cause hypocalcemia (low levels of calcium in blood) and severe kidney damage, similar to the effects of ethylene glycol poisoning (main ingredient in antifreeze). Clinical signs of oxalate toxicosis include weakness, increased salivation, GI distress and tremors.ô  ô

Onions and other Allium spp. plants contain organosulfoxides that can cause toxicosis in many animal species. Ingestion of onions and related plants may result in damage to red blood cells and anemia. Easting these can result in weakness but also may result in death without significant clinical signs.ô  ô

PHA is a lectin present in raw beans, especially raw red and white kidney beans. In chickens, PHA can affect the development of a young birdãs immune system and reduce immune response if fed later in life.

PHA can also cause damage to the pancreas, kidneys, liver and other organs of chickens.ô

PHA can be destroyed and beans made safe to eat by appropriate cooking methods. (Slow cookers donãt get hot enough to destroy PHA). Canned beans have been cooked enough to break down PHA but often contain high levels of salt, which can cause salt poisoning as discussed.ô

Clinical signs of PHA poisoning arenãt well described in birds. But the negative effects of PHA on the immune system may result in higher levels of disease and death, as well as reduced egg production and GI distress.ô  ô  ô  ô

While many of us consider our feathered friendsã close companions or family members, refrain from sharing our caffeine and chocolate treats with them. Caffeinated beverages and caffeine-containing solids, including coffee grounds and tea leaves, are toxic to chickens.ô

Consumption of caffeine causes heart, lung and nervous system problems that can lead to death in high enough doses. Chocolate contains caffeine as well as theobromine, a compound related to caffeine that affects chickens in a similar way.

In addition to not feeding chickens these foods, chickens should be kept away from areas where coffee grounds are used as fertilizer or insect repellent. We should also take care to avoid contaminating chicken feed with coffee grounds.ô

Ethyl alcohol is lethal to chickens in very small quantities. Even a small amount in a low alcohol-by-volume beverage can cause significant damage to several vital organs and death.ô  ô

This list isnãt exhaustive by any means, but many of the most dangerous foods are listed. When in doubt about a certain food, hold off on feeding it to your chickens until you can confirm with your veterinarian that it is safe.

In cases of confirmed or suspected exposure of chickens to a toxic food, contact your local veterinarian or one of the two animal poison control centers (petpoisonhelpline.com or .aspca.org). As discussed in this column, time is often of the essence when toxic foods are ingested. Getting help as soon as possible will go a long way to keeping your chickens happy and healthy.

This article originally appeared in the May/June 2022 issue of Chickens magazine and was written by Joseph Gendreau, Dr. Chelsea Sykes, Dr. Maurice Pitesky and Dr. Robert Poppenga, all from the UC Davis School of Veterinary Medicine.ô

Maurice Pitesky is a faculty member at University of California School of Veterinary Medicine-Cooperative Extension with an appointment in poultry health and food safety epidemiology. Dr. Pitesky earned his B.S. in biology from UCLA, and his DVM and MPVM from UC Davis. Pitesky is also boarded in Preventative Veterinary Medicine (DACVPM). Piteskyãs research interests are focused in mapping of avian diseases, food safety epidemiology and in gaining a better understanding of small scale poultry production with respect to environmental sustainability, poultry health and food safety.