Axes, Mattocks & Mauls: Which Do You Need?

When it comes to tree management without the use of modern machinery, these simple time-tested tools can help get the job done. 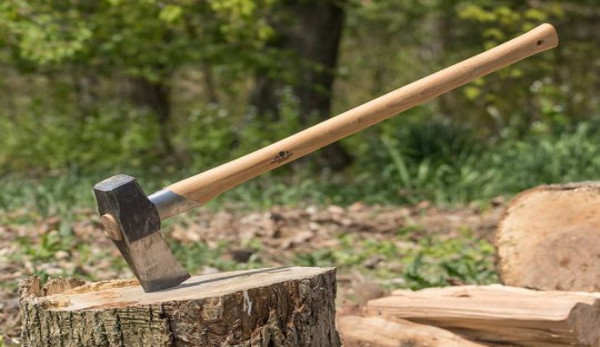 Back in the olden daysâ€”back before gasoline engines and electric motors and machines like chainsaws and wood splittersâ€”farmers did a lot of their work with simple, well-constructed hand tools. For jobs like felling trees, making firewood and digging stumps, tools like axes, splitting mauls and mattocks were essential.

Even today, I think thereâ€™s a place in modern tool sheds for these time-tested tools that operate on manpower and have no need for gas, oil, spark plugs and such. The question is: Which of these tools might you find useful on your hobby farm? Hereâ€™s a quick rundown human-powered cutting tools and their main uses.

An axe is a sharp, wedge-shaped, metal blade attached to the end of a long handle typically close to 3 feet in length, though some axes can have much shorter handles. Axe heads have been made from a variety of materials through the years, but today they are usually made of steel. Some may have two blades at opposite ends of the head, while othersâ€”known as Pulaski axesâ€”have a regular blade on one end of the head and a mattock on the other.

There are many, many different types of axes, and the term â€śaxeâ€ť can be used generally to describe splitting mauls, mattocks and other similar tools. However, when most people picture an axe, they are thinking of a â€śfelling axe,â€ť a very sharp tool used for cutting down trees and through logs, or a â€śsplitting axe,â€ť with a broader head used for splitting wood, such as for making firewood.

A heavy tool (usually with an 8-pound head) with a handle that is generally straighter than a traditional axe. The head of a splitting maul is also wider than the head of an axe, typically with a blunt sledgehammer end on the opposite side of the splitting wedge. The handles are made from a variety of materials, including hickory, steel and fiberglass.

A splitting maul is designed specifically for splitting wood. With its heavier and wider head, more power can be generated for splitting logs while lessening the likelihood of the tool getting caught in the wood.

A typical mattock has a small head, weighing an average of 5 pounds, with two small cutting blades on either side. A â€ścutting mattockâ€ť has a small axe blade on one side and a mattock blade called an â€śadzeâ€ť on the other; a â€śpick mattockâ€ť has a pointed pick in place of the axe blade.

A mattock isnâ€™t a tool for chopping down trees or splitting firewood. Instead, mattocks are used for digging and slicing through tough roots, as you might need to do if removing a stump from the ground.
When it comes to tree management on your farm, you may need one or all three of these. Take a look at the work that needs to be done, and supply your barn accordingly.