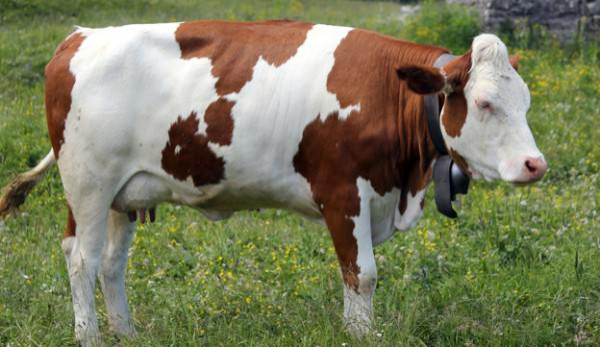 Use: A medium-sized breed, the Ayrshire weighs about 1,200 at maturity and produces about 17,000 pounds of milk with 3.9 percent butterfat.

History: The breed originated in Scotland and was imported to the United States in 1822. According to the U.S. Ayrshire Breeders’ Association, farmers in New England needed a dairy cow that would graze the pastures of their rough, rocky farms and tolerate the cold, often inhospitable winters. In many ways, the environment in New England was very similar to the Ayrshireâ€™s native Scotland, and she thrived in her new home.

Conformation: Ayrshires are lovely cows with mottled, reddish-brown patches set against a white background. On some bulls, the mahogany color is so dark that it appears almost black in contrast to the white. For many years, the Ayrshire horns were a hallmark of the breed. These horns often reached a foot or more in length. Unfortunately, the horns were not very practical, and today almost all Ayrshires are dehorned as calves.

Special Considerations/Notes: Farmers practicing dairy grazingâ€”or making milk primarily off of pasture have shown a renewed interest in the breed. Ayrshires excel in udder conformation and are not subject to excessive foot and leg problems.