I’m crazy about azaleas and rhododendrons, so I’m particularly appreciative of the Rapallo municipal gardening department this time of year. They’ve scattered huge potted azalea and rhododendron plants throughout the city center this week. 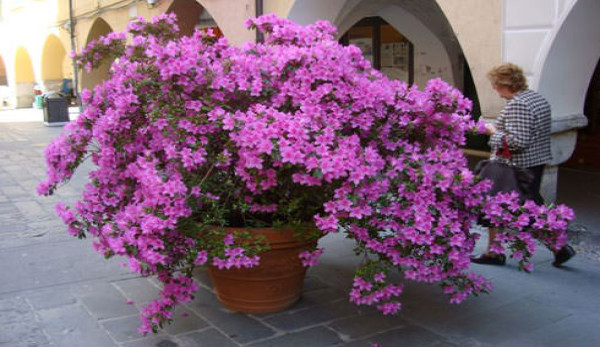 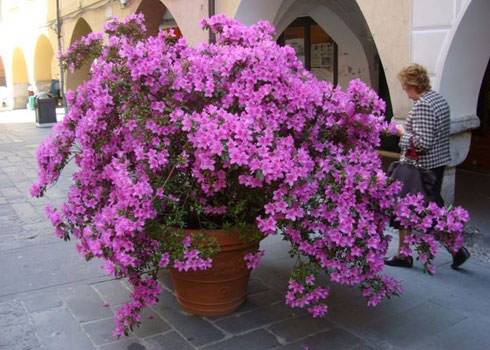 Hopefully, I’ll be able to get my own potted azaleas to grow as big as this beauty.

I’m crazy about azaleas and rhododendrons, so I’m particularly appreciative of the Rapallo municipal gardening department this time of year. They’ve scattered huge potted azalea and rhododendron plants throughout the city center this week, and most of these monsters are spectacular specimens.

Red and pink dominate and most of the plants are evergreens, but they do have a few big pots of the deciduous Exbury azaleas with orange and yellow flowers. It’s a pretty good show and most of these venerable explosions of color tower over the pedestrian traffic passing below. This is about time for azalea shows in the States, too, so I urge you all to take advantage and visit local shows. Azaleas and rhododendrons are lush bloomers and can make a landscape seem unreal.

The Rapallo gardeners keep all their big potted azalea and rhododendron plants in a nice semi-shaded nursery area. They tell me they do a heavy root pruning every two or three years, during which they remove a slice of the roots and soil and replace that with new dirt. They also told me they feed the plants with an acidic liquid fertilizer every month. I think not feeding potted azaleas regularly is the most common mistake people make with this plant.

The next most common mistake, aside from forgetting to water, is over-zealous repotting in which the root ball is buried a bit deeper. Azaleas like to have their roots at the surface, and can suffocate if buried even an inch too deep.

I worked in a wholesale azalea-production nursery when I first started in the nursery business. I worked for a Japanese grower in California, and he told me, as have several other prominent Japanese nurserymen in California, that he learned to grow and propagate azaleas while interred in the Japanese camps in Idaho during World War II. I started working at the azalea nursery for $1 an hour, and I still have a picture of myself posing proudly with my paycheck after I’d been given a raise up to $1.25 an hour. Ha!

I remember that the most hated pest in the azalea nursery was a brown moth that would lay eggs in the plants. I was given a book of matches and instructed to catch these brown moths, gently squash them and then build a little fire with grass and straw to burn them.

We’re getting close to the point in our own garden that we might be able to host some azalea plantings. The Exbury azaleas are a bit more cold and heat tolerant, so I’ll probably plant a few of those in the beds while I’ll keep a few florist’s azaleas in big pots.