I remember the first time I saw her. She was a little gray ball of fuzz, no bigger than a mouse. 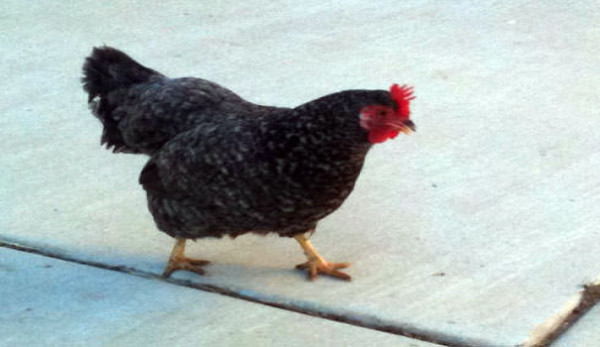 Baby Jo, my home-grown hen, is all grown up.

I remember the first time I saw her. She was a little gray ball of fuzz, no bigger than a mouse. She was following her mother around, peeping constantly to make sure Mom knew where she was at all times.

I wasnâ€™t happy to meet her. I didnâ€™t want another chicken, and went through a lot of trouble every day to pull the eggs out from under my broody hens to make sure none of them hatched. But this particular hen had managed to find an impenetrable hiding spot. I had no idea where she was. I knew one day she would reappear with a brood of chicks at her side. I was relieved when it turned out to be only one.

Had I knownÂ Baby Jo was a hen, I wouldnâ€™t have been upset at all. But I had no way of knowing, and the last thing I needed was a third rooster in my yard.

We began calling her Baby Jo right away because her mom was one of the Joâ€™s (Betty Jo, Bobby Jo or Billie Joâ€”we couldnâ€™t tell them apart), though we didnâ€™t know if she was Baby Jo or Baby Joe. It wasnâ€™t apparent for quite a while that she was indeed Baby Jo and that we were lucky enough to have acquired another hen for our flock.

Baby Jo spent the first part of her life at the bottom of the pecking order. Once her incredibly doting mother stopped taking care of her and let her be a grown-up chicken, the other hens began putting her in her place. She was chased away from newly discovered scores ofÂ food and would get picked on just for being too close to one of her aunts.

But then, one day, Baby Jo got lucky. A few of my hens and one of my roosters came down with avian pox. The Jo that came down with the sicknessÂ  got it bad and had to go to the hospital. I then I had to keep her separated from the flock for almost a week, locked away in a cat carrier in my bedroom. When I finally returned her to the group, the other hens made it clear that she was now low-hen in the pecking order. Baby Jo was finally above someone in rank.

Although Baby Jo is fully integrated into the flock and even climbed a bit on the social ladder, she is still different from the other birds. Sheâ€™s the one hen who insists on roosting on the outside edge of the coop every night instead of inside on the roosting pole like the rest of the flock. When I go to the coop at night to shut the birds in, I have to pick her up and put her inside. She squawks in protest each and every time.

Itâ€™s been more than a year, and Baby Jo is fully grown now. She is much bigger than her mother and both her aunts, and looks more like her father, Mr. Molly, than she does her mom. Two days ago, she finally laid her first egg. Thatâ€™s when I knew my fuzzy little chick was truly grown up.