Bake Bread in Your Dutch Oven

Cast iron is the perfect cookware for baking a crusty bread with a soft, airy center. 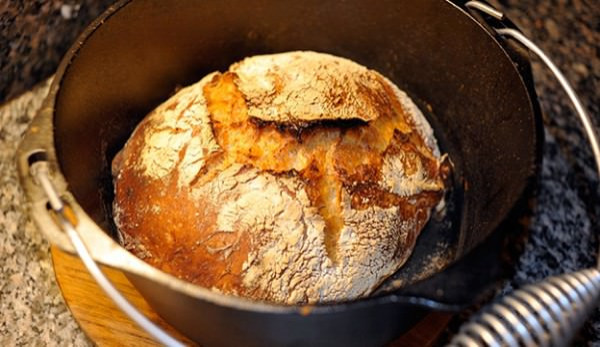 Making artisanal bread is easy and nearly foolproof when baked in a cast-iron Dutch oven with a lid. The even heat and heat retention of cast iron provides the ideal environment for creating a loaf with a soft, airy inside, and the Dutch oven lid helps trap the steam of the baking bread, giving us that crunchy, lightly browned crust.

Cast-iron cooking has long been preferred by farmstead chefs. In many cases, well-seasoned and cared-for cast-iron pots and pans can last for many generations, passed along from great-grandmothers to grandmothers to mothers to daughters and, these days, sons. Like saving and sharing heirloom seeds, cooking with cast iron brings people together.

For those new to cast iron, there are a few essentials for caring for your cookware, according to Lodge Cast Iron, a manufacturer of modern cast-iron cookware:

If you find an old, rusty cast-iron skillet or Dutch oven at a farm auction or secondhand store, snatch it up quickly. Theyâ€™re simple to restore and re-season.

The artisan bread recipe below was shared with us by Roger Doiron, founder of Kitchen Gardeners International. Itâ€™s perfect for serving this winter along with your favorite soup. If you donâ€™t have a go-to soup recipe, try one of our favorites: Golden Squash and Sweet Potato Soup, Kale Leek Soup or BLT Soup.

Preparation
In large bowl, dissolve yeast in water. Add flour and salt, stirring until blended. Dough will be shaggy and sticky. Cover bowl with plastic wrap. Let the dough rest at least 8 hours, preferably 12 to 18 hours, at warm room temperature (about 70 degrees F).

When doughâ€™s surface is dotted with bubbles, itâ€™s ready. Lightly flour work surface and place dough on it. Sprinkle dough with some flour and fold it over on itself once or twice. Cover loosely with plastic wrap and let it rest for about 15 minutes.

Using just enough flour to keep dough from sticking to work surface or your fingers, gently shape it into ball. Generously coat a clean dishtowel with flour, wheat bran or cornmeal. Put the seam side of the dough down on the towel and dust with more flour, bran or cornmeal. Cover with another towel and let rise for 1 to 2 hours, until dough is doubled in size and doesnâ€™t readily spring back when poked.

When the dough is ready, carefully remove pot from oven and lift off lid. Slide your hand under towel, and turn dough into pot, seam side up. Dough will lose its shape a bit, but thatâ€™s OK. Firmly shake pan once or twice help distribute dough evenly, but donâ€™t worry if itâ€™s not perfect; it will straighten out as it bakes.

Cover and bake for 30 minutes. Remove lid and bake an additional 15 to 20 minutes, until loaf is beautifully browned. Remove bread from Dutch oven and let it cool on rack at least 1 hour before slicing.

Learn more about cooking with cast iron on HobbyFarms.com: