Baling hay is a satisfying and worthwhile effort, but it's challenging. Follow these tips to help hay baling days go as smoothly as possible. 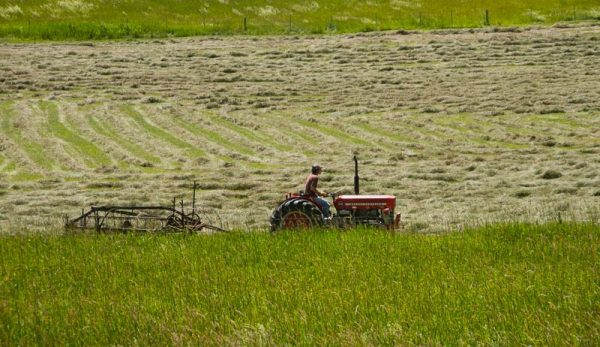 It’s not the easiest of tasks, but baling your own hay is a satisfying project that isâ€”in my opinionâ€”well worth the effort involved. Whatâ€™s better than producing your own hay for your livestock?

But it is difficult, especially if you produce the small square bales that are so convenient for many hobby farmers. I bale hay on my northern Wisconsin farm every summer, so here are a few tips to make the baling days proceed as smoothly as possible.

1. Start as Early as Possible

To anyone who has ever baled hay, this is obvious but it bears repeatingâ€”the process is slow and canâ€™t be rushed. Only so many bales can be produced per hour, and even when theyâ€™re off the fields, they still need to be stored in a weather-protected area. Unless you have hay wagons to spare and a lot of large, empty garage bays (waitâ€”an empty garage bay on a farm?) where you can park full wagons of hay, youâ€™ll need to keep unloading wagons as you go along, which is also a time-consuming task.

So while you shouldnâ€™t try to start baling hay before the hay is fully dried, thereâ€™s no reason to dawdle around either. Depending on the number of helpers and the number of balers you run simultaneously, (probably just one if youâ€™re a hobby farmer), it could take hours to produce and stack a couple of hundred bales of hay. Try to get started early in the afternoon so that you have plenty of time to finish before nightfallâ€”itâ€™s no fun trying to put away hay bales in the dark, and if thereâ€™s still hay on the fields when night comes, it could get wet all over again as dew begins to form.

Remember to take care of yourself while baling hay, which means not only exercising caution around the machines, but also looking after your personal health by staying cool and hydrated. The phrase â€śmake hay while the sun shinesâ€ť says it allâ€”ideally, youâ€™ll bale hay on warm, sunny days, and because the process can be quite strenuous, beware of the mix of hot temperatures and hard work.

Use common sense. Donâ€™t get so caught up in the project (“Weâ€™ve got to get that last hundred bales stacked!”) that you lose sight of what you can handle. Take breaks to cool off and escape from the sun. Drink plenty of water. Wear clothing thatâ€™s ideal for hot weatherâ€”light-colored cotton is a good choice. Keep fans running when and where possible. If you have people riding the hay wagon to stack the hay bales as the bales are produced, let them work in shifts so that no one is out in the sun for too long at a time. No farming pursuit is worth someone having a heat-related issue, so be careful, use good judgmentâ€”and bale on cooler days if possible.

In theory, with machines a single person can bay hale. This is certainly the case with round bales, but itâ€™s technically possible for small square bales as well. You could cut it yourself, rake it yourself, bale it yourself and stack it in the barn yourself, no help required.

But unless you produce just a handful of bales, this really isnâ€™t practical, and anyone who has ever participated in baling small square bales is probably laughing at the notion of doing it alone. Itâ€™s a team effort, and to keep things running smoothly Iâ€™ve found that you need at least a half-dozen people (preferably more). Particularly if the weather is hot, thereâ€™s no reason to be understaffed while working on such a difficult project. Whether you enlist the help of your family and friends or hire helpers as necessary, youâ€™ll appreciate having a larger team of people. With enough people and multiple wagons, you can even have one team baling hay while another works on unloading each wagon as it gets filledâ€”a very efficient way to proceed.

4. Stock Up on Spare Parts

Baling hay is hard on machinery too, and sometimes things just break or wear out. Shear pins. Rake tines. Tires. You name it.

While itâ€™s impossible to prepare yourself for every possible scenario, having a supply of replacements parts for your machineryâ€”and a wide array of tools on handâ€”will help you get back up and running as quickly as possible if something does go wrong.