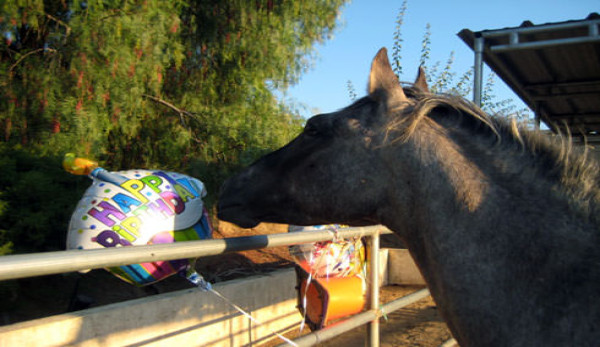 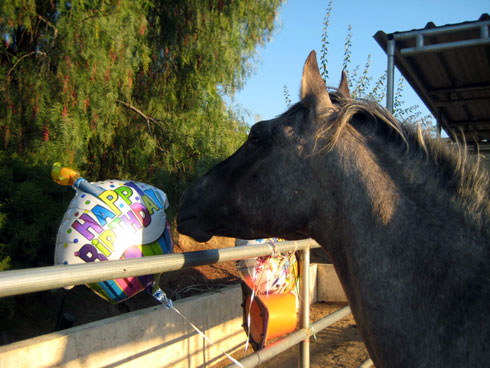 Not much frightens my 3-1/2-year-old Spanish Mustang, Rio. He will barge up to just about any strange object, grab it in his mouth, and shake it until it breaks. When it comes to a balloon, however, itâ€™s another story.

Rioâ€™s first encounter with balloons came a couple of months ago while on the trail. I was ponying him (leading him as I rode) when we spotted a few glinting Mylar balloons tied to the trail fence. They were intended to help party guests find their way to the right driveway, but as far as Rio was concerned, they were horse-eating monsters that were waiting for him to walk by so they could devour him in their shiny mouths.

My normally brave gelding snorted loudly and firmly planted his feet, refusing to move. It took a lot of coaxing and an example set by my friendâ€™s horse, Teddy, to convince Rio to walk past the scary, floating creatures.

For my birthday, I received four Mylar balloons from a friend. After letting them live in my bedroom for a couple of weeks, I decided to take them outside so Rio could meet them. The helium was still working, so the balloons were still floating at the end of their ribbons.

When I first walked outside with the balloons, all the horsesâ€™ ears perked up. The chickens ran for the coop, terrified, which did nothing to calm Rio. As I approached his stall, he ran to the back corner, snorting and spinning. I tied them to the rail of his paddock while he whirled and galloped, trying to escape.

I stood next to the weird, floating things and tapped them with my hand, all the while talking to Rio and telling him there was nothing to fear. He didnâ€™t believe me for the first 10 minutes, and continued to snort and spin. When he would stop to look at the balloons, I noticed he had grown much taller. His 14.1-hand height suddenly appeared more like 16.

But just like a cat, Rioâ€™s curiosity got the best of him. He slowly began to creep toward the balloons, his muscles taught and ready for flight at the slightest provocation. Soon, he was sniffing the balloons from a distance. They moved in response to the puffs of air coming from his nostrils, which made him step backward with a snort.

Then, just like that, Rio decided these things had way too much potential as toys to be afraid of them. His fear suddenly left him, and he began batting the balloons around with his upper lip. Soon, the balloons were banging him in the head and whipping all around in response to his pummeling. He could have cared less.

I took a few pictures of him as he gradually destroyed each of the balloons. They had managed to survive two weeks of helium loss but were no match for Rioâ€™s teeth. By the time he broke the last one, he had decided they tasted good, and I had to drop my camera and dash into his stall to pull the dead balloons out of his mouth.

Despite my efforts, I am still worried about running into balloons on the trail. Not because Rio will be scared of them, but because now, he thinks theyâ€™re edible.