A Corgi and a horse find a way to amuse themselves. 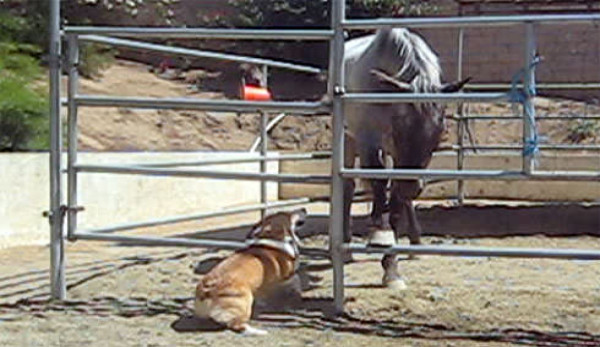 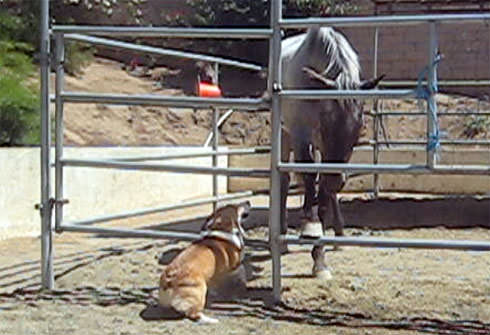 My roommate’s Corgi, Bandit, has found a new way to spend time outside by playing with my horse, Rio.

What happens when two very smart and playful animals come together on a small urban farm? They find a way to amuse themselves. Enter Bandit and Rio.

Bandit, my roommate Michelleâ€™s Corgi, has found the perfect way to use his livestock instincts and also keep himself entertained. And Rio, who is very smart and often very bored, has learned how to train a dog.

This all began a few weeks ago, when Michelle told me that she was having trouble keeping Bandit away from Rio. She said Bandit keeps barking at the horse, and the horse keeps pawing.

A few days later, I witnessed these antics first-hand. Michelle was gone for the day, and I let Bandit outside to get some sunshine. He made a beeline for Rioâ€™s stall and stood in front of it expectantly.

As soon as Rio saw Bandit, he walked over, put his head down, and the two looked at each other. Then Rio began pawing.

The moment Rioâ€™s hoof hit the ground, Bandit started barking. Not an ordinary bark but high-pitched frantic yelps that pierced my eardrums. With every strike of Rioâ€™s hoof, Bandit yelped.

After just a minute, it became apparent that Bandit thought he was performing some kind of important job â€” that is, getting after the horse for pawing. Rio, on the other hand, had figured out that if he pawed the ground, he could make this weird dog go crazy.

Rio experimented with Bandit. First, heâ€™d just paw once, which elicited one yelp. Then heâ€™d paw three or four times, which gained him three or four yelps. In between pawing, Rio put his head down to try to make contact with Bandit, which was always futile. Bandit would retreat to a safe distance where he was just out of reach. Rio would then resume his pawing.

The look on Rioâ€™s face was priceless during the entire event. He was clearly quite amused by this frenetically barking dog, and loved the idea that his behavior could determine how much the dog would yelp. He had discovered the joys of training another animal.

Bandit, on the other hand, had also trained Rio. Although his barking seemed intended to stop Rio from pawing, all it did was encourage the pawing. Bandit had trained Rio to paw in exchange for entertainment.

This silliness now goes on now on a daily basis. Whenever Bandit goes outside, he starts up with Rio, who is more than willing to oblige.

The consequences of all this for the humans on the farm is that Bandit comes back in the house covered with dirt from his escapades while Rio has excavated a hole in his stall deep enough to bury a body. But thatâ€™s okay. Michelle and I deal with it because, after all, our animals need to have some fun, too.