Bantam Breeds Pack A Lot Into A Little

Bantam breeds are certainly cute little birds, but these chickens carry their own weight in delicious eggs and meat, and incomparable companionship. 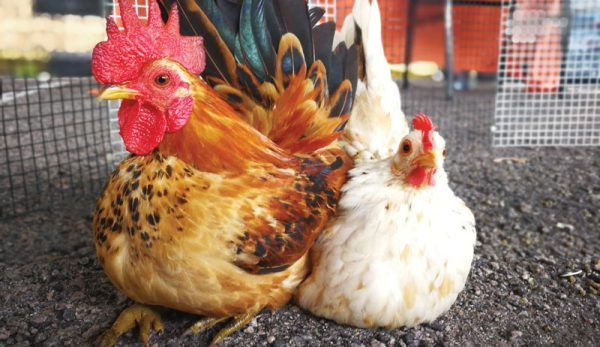 I have kept and loved chickens since I was a boy. Growing up in the suburbs on the edge of a large city, through necessity, much of my early poultry-keeping exploits were solely limited to raising bantams, a type of chicken just like full-size breeds but only 1‚ĀĄ5 to 1‚ĀĄ4 the size.

In those far-off days, pocket money only went so far. Fortunately for me, I quickly discovered that bantams were the most economical fowl to keep. They required less food and smaller (cheaper) housing, and they produced more than enough eggs to satisfy our household.

My youthful bantam-keeping experience also taught me the valuable lesson of expenditure versus income. I soon learned that any surplus eggs, chicks or birds produced were always in huge demand around the neighborhood.

These beautiful fowl had the ability to pretty much pay for their own keep simply by virtue of the fact that all their products were edible. The eggs were keenly sought after (especially for cake baking). And surplus birds, though small, made a delectable feast, with a full, natural flavor.

If you choose your breed wisely, these triple points of eggs, meat and the profitable sale of hatching eggs, chicks and growers can still be combined. And these are just some of the many reasons bantam breeds are so very popular today.

The Bankiva junglefowl, or red junglefowl, may be the origin of our bantam breeds. The term ‚Äúbantam‚ÄĚ would seem to establish that fact.

Bantam (aka Banten) is the name of a town and district in the northwest of Java, Indonesia. In 1595, the Dutch established themselves at Bantam. And in 1602, the English erected a factory in the same place, which was the first possession of the English in the East Indies.

These beautiful miniature junglefowl, sold to the British at Bantam, were imported into England under the very natural appellation of bantam fowls. Their elegance and diminutive size rendered them favorites. In due time the name came to be conferred to all small or dwarf fowls.

What is undeniable is the surge of interest created by the bantam. From the Victorian era, when large fowl were quite literally ruling the roost, the little bantam gradually replaced it. This rapid advancement can be traced through old poultry books.

In the early 1880s, that masterpiece of poultry literature, The Book of Poultry by Lewis Wright, only denoted 30 of its 591 pages to bantams. However, by 1893, L. C. Verrey wrote the Book on Bantams, said to be the first devoted solely to their breeding and culture.

At many of today’s poultry shows, bantams are often more in evidence than their larger counterparts.

Read more: Check out these 3 breeds of bantam ducks!

The defining characteristic of a true bantam is that, unlike other poultry breeds, it doesn‚Äôt have a larger counterpart. The true bantam classification covers breeds such as the Sebright, the Booted, Japanese and the Belgians.

These dwarves of the poultry world make up for what they lack in size by having larger-than-life personalities and friendly natures. However, you can‚Äôt really depend on them for their eggs, which are tiny and certainly won‚Äôt make a satisfying meal!

For the purpose of this article, I‚Äôll focus on those bantams selectively bred down in size (from productive large fowl) that still retain their utilitarian value. If you‚Äôre looking for an egg producer but lack space, do exactly as you would if you were choosing a larger breed. Select bantam varieties of the Rhode Island Red, Sussex, Wyandotte or Leghorn.

If purity of your stock is of no big concern, you can still produce tasty meat by crossing Cornish bantam/Old English Game with a Rhode Island bantam. The result will be a yellow-skinned succulent bird that will be greatly enhanced by corn-heavy feed and access to grass.

Having never kept this breed before, I was particularly interested in the response from Grant Tenley, president of the Plymouth Rock Fanciers Club of America to my questions. The club has a directory, which is an excellent tool for locating good breeders in different areas.

Growing up on a farm, Tenley has always lived around poultry. ‚ÄúWe raised White Plymouths and White Leghorns for eggs and meat. (But) Plymouth Rocks became my favorite chicken,‚ÄĚ he says. ‚ÄúWe had Barred Plymouth Rocks for years. And then in 2012
I purchased Columbian Plymouth Rocks for 4-H and have been breeding and improving them to meet the Standard of Perfection since 2016.‚ÄĚ

Plymouth Rock bantams are bred of quality genetics that conform to the Standard of Perfection, a written description of an ideal bird of the breed. ‚ÄúA novice in the fancy should be looking for a thrifty and vigorous chicken (with) a single comb of medium size with five points, nice yellow legs, good tight wing carriage, stout bone structure, a wide stance and a well spread tail, carried at a 20-degree angle for females and a 30-degree angle for the male,‚ÄĚ Tenley says.

A good layer should be active and thrifty. They should be bright-eyed and in good body condition.

‚ÄúYou must monitor the diet of your chickens to increase egg output,‚ÄĚ Tenley says. ‚ÄúFat hens will not lay as many eggs. A wide bird with good body carriage will lay best. Try to avoid narrow, smaller birds.‚ÄĚ

Plymouth Rock cockerels weigh a good bit more than the majority of bantam breeds. Standard weight is 32 ounces for the bantam cockerels. Many can reach a larger weight at maturity, making the breed a good table bird.

They‚Äôre perfect for small-scale breeders, fanciers or hobbyists, whether you want them for eggs, meat or exhibition. However, they do tend to eat more than the smaller ornamental bantams.

An eclectic mix went into its creation. Sebrights, Hamburgs, Brahmas and Cochins all played their parts in what was provisionally called the Eureka. They were finally admitted to the American Poultry Association‚Äôs Standard of Perfection as Wyandottes in 1883.

Bantam versions were soon created. Although small, they‚Äôre often on the large size for bantams (thus unwanted cockerels can make a decent meal). So for those looking for a beautiful utility bantam, these really can‚Äôt be bettered. However, although exquisitely beautiful, some of the white birds often have the capacity for excess feather and fluff. Though welcomed by the exhibition world, these traits are often quite unproductive.

The docile, quiet, hardy, friendly and attractive Wyandotte simply can‚Äôt be recommended highly enough and are also eminently suitable for the beginner.

Read more: Bantam chickens are perfect for the backyard.

It was the poultry farmers of Rhode Island‚ÄĒmotivated by the demand for a fowl that could produce eggs and meat‚ÄĒthat subsequently developed the Rhode Island Red. And their clear focus on utility would see it become the world‚Äôs most successful breed.

Their aim to produce the hardiest stock, capable of surviving the harsh New England winters, has served this adaptable chicken well.

Some folk dismiss the large Rhode Islands exhibited at shows throughout the country as being too big and not laying enough eggs to be classed as utility. Conversely, some exhibition bantam strains are renowned for being excellent layers of reasonably sized tinted eggs.

While the hens are usually sweet little things, the cocks often go oversize‚ÄĒmaking them ideal for the stew pot! The docile, friendly and easily contained Rhode Island Red is yet another bantam perfect for the beginner interested in utilitarian values.

Most of Europe‚Äôs indigenous poultry breeds laid white eggs. Holland (home of the Welsummer) was no different. But the Dutch breeders were amongst the very first to recognize the commercial importance of the brown egg, which were then (quite erroneously) perceived to be the healthier choice.

I have kept this delightful breed‚ÄĒfamous for rich brown eggs‚ÄĒin its large and bantam form.

Welsummers are friendly, active but placid birds, supremely suited to a backyard or hobby farm. Some bantam strains are very productive. But many produce a much lighter-tinted egg than their larger counterparts. If shell color is vitally important to you, ask the breeder of your stock to show you some of the eggs their birds have produced.

The popularity of blue-shelled eggs has exploded in recent times. My young nephew‚ÄĒa very fussy eater‚ÄĒwould only eat blue eggs and was convinced they tasted better than the conventional colored ones!

The producers of these sky-blue eggs are, of course, the wonderful Araucana. Named after the Araucano Indians, this is South America‚Äôs only native fowl. A number of forms can be found in the U.S., with rumpless and striking tufted-eared versions being seen. Its most distinguishing feature, though, is of course production of those beautiful-colored eggs.

A word of warning to anyone buying stock. Go to a well-known, registered breeder and ask to see some of the eggs his strain produces.

Egg color varies enormously, and many produce a disappointing olive or muddy green color (often a sign of crossbreeding). There are some excellent strains of Araucana bantams out there that produce scores of pastel blue eggs. You just have to do your research.

Note: This very active, hardy, fascinating chicken can be a bit flighty and vocal.

This old Italian breed is extremely well known‚ÄĒno doubt helped by Foghorn Leghorn, the animated rooster that appeared in numerous Looney Tunes cartoons! Although Italian in origin, American breeders developed it. Mr N. P. Ward of New York City is recorded as being the first importer of Brown Leghorns back in 1834.

Leghorns have historically been highly valued for their egg-laying abilities. And the breed is still unsurpassed in its ability to produce large numbers of white eggs. Utility whites have been recorded as laying 300 eggs a year.

Exhibition breeding for massive upright combs in the standard-sized cockerels and big floppy ones in hens has detracted from their utility performance. However some bantam strains of black/brown leghorns lay almost as well as the commercial hybrids.

I wouldn‚Äôt recommend this breed for anyone with close neighbors; they tend to be flighty and can be quite noisy. However for those with a bit of space, they make a superb choice.

This article originally appeared in the July/August 2022 issue of¬†Chickens¬†magazine.

Hobby farmer Lee Connor is an author and illustrator, specializing in features for pet and lifestyle magazines.