Photo by Judith Hausman Stuffed bell peppers make a traditional and hardy fall meal. Surprisingly hardy in the fall garden, juicy green bell peppers freeze well when diced, and they also can hold any number of tasty stuffings. This stuffed bell pepper recipe is pretty conventional, but rather than rice, I chose chewy barley. […] 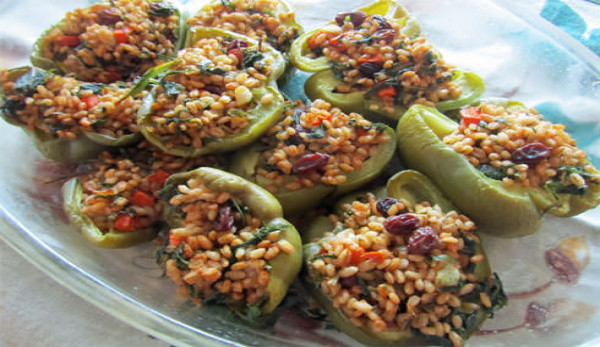 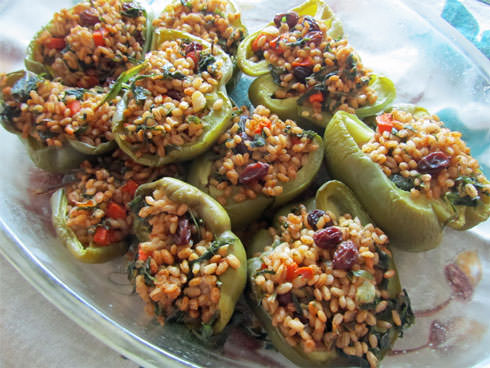 Surprisingly hardy in the fall garden, juicy green bell peppers freeze well when diced, and they also can hold any number of tasty stuffings. This stuffed bell pepper recipe is pretty conventional, but rather than rice, I chose chewy barley.

Without really meaning to, I served a vegan dinner by adding only chopped carrots and onions, sautéed greens and raisins to the cooked barley. You could moisten the mix further with some tomato sauce, spike it with chilies or curry, or add some chopped, sautéed mushrooms, barley’s traditional partner. Try other grains, such as kasha (buckwheat groats), couscous or bulgur. You might also ladle on some simple tomato sauce after the peppers bake. Topped with grated Gruyere or cheddar or mixed with browned ground beef or lamb, nonvegan stuffed peppers are delicious, too.

The peppers must hold enough shape to contain the filling so I soften them only with a microwave blast. If you watch carefully, you can do this in a preheating oven, too. Some people like to char the peppers over a fire and peel them before stuffing, but I’ve never been good at that technique. Plus, the local peppers have crisp, thin walls that don’t need peeling.

Heat the oven to 350 degrees Fahrenheit. Halve and clean the peppers. Arrange them in a large, oiled baking dish and bake (12 minutes) or microwave them until slightly softened (4 to 6 minutes).

Meanwhile, cook the barley in the stock or water. Throw in the raisins as the cooking finishes so the steam plumps them up. Set aside.

Sauté the carrot, onion and garlic in 1 to 2 tablespoons olive oil until just soft. Then add the greens, and cook until wilted. Combine this with the barley. Add spices, if using, and season with salt and pepper.

Carefully spoon the mix into the halved peppers. Cover, and bake at 350 degrees for 30 minutes.