The striking Barnevelder chicken lays dark-brown eggs year-round and is a gentle addition to backyard flocks. 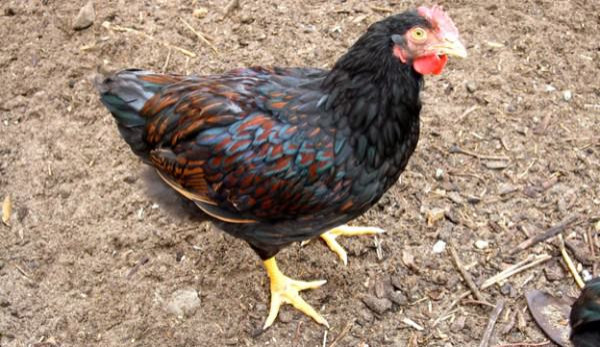 Use: The striking Barnevelder chicken lays dark-brown eggs year-round and is a gentle addition to backyard flocks.

History: The Barnevelder chicken breed originated in the Barneveld region of the Netherlands, an area famous for its poultry. Local Barneveld chicken breeds were crossed with Asiatic chicken breeds, including the Langshan, Cochin, Brahma and Maleier, resulting in the Barnevelder. Breeders selected these chickens for their ability to lay well year-round, even during the long, damp Northern European winters. They were also looking to increase production of coppery, dark brown eggs. The Barnevelder was accepted into the American Poultry Associationâ€™s Standard of Perfection in 1991.

Conformation: The iridescent appearance of the Barnevelder chicken breedâ€™s plumage comes from the lacing of bronze on the greenish-black feathers of the neck, head and back and the lacing of greenish-black on the bronze feathers of the saddle and breast. The male shanks are dark yellow and the female shanks are yellow with reddish-hued scales on the front. Barnevelders have a bright-red single comb that stands straight and upright with five well-defined points. Wattles and earlobes are medium-sized and bright red. Barnevelder cocks weigh 7 pounds and hens weigh 6 pounds.

Special Considerations/Notes: Barnevelder chickens are an ideal choice for hobby and urban farmers, as they are excellent layers, hardy, quiet and comfortable in both free range and confinement. Their lively, active and friendly nature is also great for children hoping to keep chickens as pets. Barnevelders are poor flyers, so a garden fence will help keep them contained. Highly susceptible to Marekâ€™s disease, farmers should be sure to vaccinate Barnevelder chicks before adding them to the flock.