The Barn Sanctuary: Saving The Farm & The Animals

Michigan's Barn Sanctuary, a rescue farm in Chelsea (and star of the upcoming "Saved by the Barn"), gives animals in need a second chance. 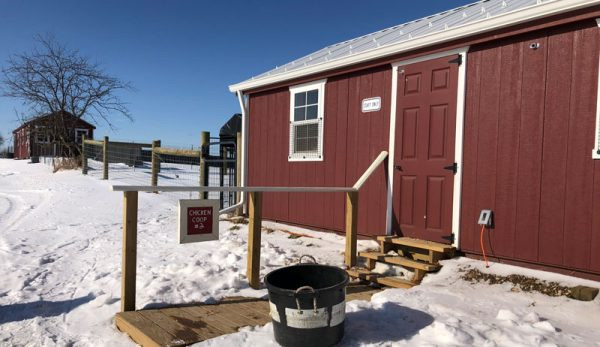 Tom McKernan had a huge dilemma on his hands.

His parents were moving to a retirement home, and the fate of their 70-acre Michigan farm rested in his hands. This was his boyhood home and the house where his mother was born and had lived her entire lifeābut Tom already knew that the farm was too small to be profitable.

“When I was in school, I told my dad he could pay me just $1 per day for all the chores I did around here, and the farm would still lose money,” Tom says.

The alternative that loomed for the property, conveniently located near the entrance/exit ramps of an interstate highway, far from thrilled him.

“I didn’t want this to become another McDonald’s or another gas station,” he says. Stumped for a solution, he turned to his familyāhis siblings and his childrenāand to local residents for suggestions.

The answer came from his son, Dan, who worked in marketing, online fundraising and web development down in Austin, Texas. Dan’s ideaāto turn the family farm into a sanctuary for farmed animalsāwas met with skepticism from his father.

“I thought, people give you money for this?”

Dan swiftly set out to prove his concept was a sound one. “I got nonprofit status, put up a quick website, and started a basic campaign inviting people to become founding donors,” heĀ explains. “And thousands of people hopped on.”

The Barn Sanctuary officially opened its doors in August 2016.

As with any endeavor, there were a few obstacles encountered on the way.

The facilities, for instance, required a major overhaul. The floor of the main barn’s basement was covered with “three to four feet of fossilized manure,” Tom notes. “All my life, I’d never seen the cement of the floor in there.”

What would eventually become the goat barn was a jumbled tool shed. “You couldn’t walk more than four feet in a straight line,” Tom says.

The tumbledown fencing needed to be replaced,Ā  and more housing was needed for the animals who would eventually be sheltered on the premises. But it wasn’t just the condition of the facilities that worried Tom. It was the staffing of the sanctuary.

“I was thinking, here I am for the next 20 years, feeding animals,” he chuckled.Ā

“Dad was the only one on the property for nine months,” Dan explains. “I’d fly in every few weeks for a week to help out.”

In May 2017, nine months after the sanctuary opened, things changed dramatically. “We secured funding from a foundation for payroll,” Dan says, “So we left our jobs and came here.”

“We” includes Kelly Holt, the executive director of the Barn Sanctuary, and Dan, the founder and president. Neither had any experience with farming or with livestock. “We were a blank canvas,” Dan says.Ā

Tom, who serves as the sanctuary’s facilities director, had experience, but it was decades old. “My field was the pharmacy industry,” he says. “I worked in biotech, in research and development. I moved my family all over the US.”

Undaunted, the determined trio forged ahead. With the help of dedicated volunteers, a growing squad of sponsors and a drive to aid animals in dire need of assistance, the Barn Sanctuary blossomed into the haven it is today.

The manure-filled barn is now airy, clean and home to cows and donkeys, while goats and sheep abide in the former tool shed.

“The Humane Society of the United States called us,” Dan recounted.

“They needed help with some pigs that were hard to catch. We showed up on site and the pigsāthere were nine of themāwere definitely showing signs of starvation. There was no running water, they were eating out of the trash.

“We had to turn what was going to be the medical exam room into a maternity ward, fast,” Tom added. “Fortunately, it all worked out.”

The Barn Sanctuary does everything it can to help animals suffering from neglect and abuse.

For some, it’s a simple matter of providing a clean home and a regular source of clean food and water.

There’s Lola the goat and Jim the sheep, both of whom have leg prosthetics. Ginger, whose leg deformity required surgery, now runs and plays when previously she could barely stand or walk.

Joey the cow was born with a cleft palate. He traveled to Cornell University in New York, where one of his ribs was surgically removed and modified to repair his mouth.

And then there is Mike the cow.

“A farmer a couple of hours from here called us. He said he had a blind calf with ‘crystal things’ in its eyes,” Tom shared.

“It turned out those were cataracts. The veterinary ophthalmologist at Michigan State University told us Mike was completely blind in one eye, with 50 percent retinal detachment in the other.

“I asked what would be done if this were a human, and he replied that the retinas would be reattached … but that this kind of surgery is not done at MSU. We called around and finally found one doctor out in Pasadena who would do the surgery.”

Dan loaded Mike onto the Barn Sanctuary trailer, and the two headed off for California on what sounds more like a buddies’ road trip than a serious surgical journey.

They stopped at Mt. Rushmore, at Malibu Beach, even at “The Ellen Degeneres Show” (the sanctuary’s goats Ellen, Portia and Twitch commemorate this visit). Sadly, the surgery was unsuccessful, but Mike lives comfortably, relaxing in the sunshine and responding happily to neck scratches and the sound of Dan’s voice.

As Much Good as Possible

“We say no to people everyday,” explains Dan. “There are no drop offs. We get so many requests from around the countryāTennessee, North Carolina, Minnesota. We just can’t take them all.”

“We’re limited by our pasture and our facilities,” Kelly says. “We save the few that we can save … but maybe it’s not so much about saving them all but rather getting other people to save them. Our success is in educating the public. We want to change people’s views about farmed animals, the most neglected group of animals in the world. We want to lead people toward a more compassionate lifestyle.”

To meet this goal, the Barn Sanctuary employs several strategies.

With the exception of the poultry, all of the animals rescued by the Barn Sanctuary are neutered to prevent overpopulation. A devoted corps of volunteers donate their time and help build a community that supports the sanctuary’s endeavors.

Additionally, the volunteersāand the sanctuary staff, including Dan, Kelly and Tomāall keep to a plant-based diet while they are on the sanctuary premises.Ā

This vegan ground rule recently took a group of long-term visitors to the haven by surprise. The film crew for the Barn Sanctuary’s upcoming Animal Planet program, “Saved by the Barn,” spent six monthsĀ on the farm getting to know the people and the animals, recording video footage and audio.

“It’s hard to be playing with pigs all day, then sitting down to eat bacon or ham,” Tom noted. “They were welcome to eat burgers or steak whenever they went into town, but as long as they were on the premises they needed to stay plant based.”

The Barn Sanctuary crew has high hopes that “Saved by the Barn” will help other hobby farmers realize that they can help rescue and rehabilitate farmed animals, even on a small scale.

“People with small homesteads, people with small farms that are not financially feasible, people who start for-profit farming and find they become emotionally close to their animalsāthese folks can help by transitioning their farm to a micro-sanctuary,” stated Kelly.

“This way, they don’t have to worry about being bought out. They can keep their farm as a farm and help farmed animals at the same time.”

As for the Barn Sanctuary itself, it has been validated by the Global Federation of Animal Sanctuaries (GFAS) and has started the three-year process to become certified by them as an animal sanctuary. There are many standards to be met, but Dan, Kelly, Tom, and their staff and volunteers are working to meet them all … and are happy to give advice to anyone considering operating a farmed-animal sanctuary of their own.

“We’ll give you the info. We’ll show you the dots,” said Tom. “It’s up to you to connect those dots.”