How to Raise Chickens Bred to Be Broilers

Broilers are strange birds with an even stranger past, but when raised correctly, they're the best chickens for the table. 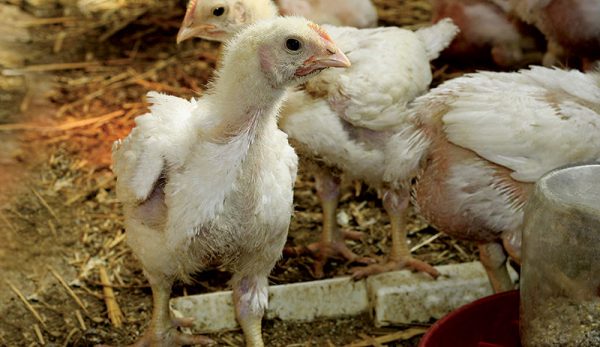 A few years back, the image of a white-feathered bird, digitally altered to grotesque extremes and shared by a recently health-conscious friend, floated across my laptop screen. The accompanying text claimed that fast-food giant KFC shortened its name from Kentucky Fried Chicken because it could no longer legally use the term “chicken” for its products. The story went that KFC sold mutated and genetically modified poultry, engineered to have eight legs each to maximize drumstick production, which no longer fit the legal definition of “chicken.”

The real reason was much more banal; you can check Snopes.com to read up on the branding decision, but, suffice it to say, no fast-food restaurant uses mutated chickens because deliberately mutated chickens don’t exist. The genetically manipulated claim is a little more difficult to address, but those eight legs are inaccurate to the point of hilarity—though, I’m sure if it were possible, factory farms would be much stranger places.

My friend’s meme drove home a sad fact about our current food culture: People rarely know what they’re eating, and this creates a space where eight-legged chickens are viable.

In the case of poultry, let’s set the record straight: If you eat chicken, whether it’s from a high-end organic store or the corner grocery, you’re almost certainly eating what’s known as a broiler breed (unless it’s a stew hen or labeled “heritage”). And, yes, they’re kind of genetically modified, but not in an “Island of Dr. Moreau” kind of way. They’re produced via a strict breeding program that’s been used for decades to produce birds that eat voraciously, mature quickly and do look pretty weird, with huge legs and feet and oversized breasts.

When we use the term “genetically modified” in reference to broilers, we’re not talking about lab coats, pipettes and microscopes, but rather deliberate breeding intended to reproduce and amplify desirable traits. This kind of breeding is common practice on many farms—hog farmers swear by the offspring of Berkshire and Yorkshire pigs—and the most common of barnyard dwellers are bred for desirable (and profitable) traits. As with plants, there are heritage breeds such as Red Rangers that boast minimal cross-breeding as well as hybrids, such as the Cornish Cross, that are the product of breeding programs.

The term “broiler” predates the birds we eat now; it came into use in the early 20th century when it was used as a catchall for birds sold for meat. In the 1940s, however, a promotion kick-started the breeding program that led to today’s meat birds.

According to the document “A Brief History of Broiler Selection,” produced by Aviagen International, The Great Atlantic & Pacific Tea Co.—better known as the A&P, the largest U.S. grocery chain at the time—partnered with the U.S. Department of Agriculture to stage its first-ever “Chicken of Tomorrow” contest in the mid-1940s. This tasked breeders with producing superior meat-type chickens. Chickens were hatched and raised by a third-party hatchery, where they were slaughtered and rated in several categories.

Henry Saglio’s Arbor Acres White Rocks won the 1948 and 1951 purebred contests, and Saglio was, upon his death in 2003, called the “father of the poultry industry” by The New York Times. A few other breeders gained notoriety from the event as well, including Vantress Hatchery, whose Red Cornish crosses were eventually bred with Arbor Acres birds to produce what we commonly call “chicken” today: the Cornish Cross.

In 1964, Nelson Rockefeller purchased Arbor Acres because of its dominance in the poultry industry. Over the years, big-name breeders consolidated and sold to multinational corporations, and today’s broilers are known by a few different “product” names, variations on the ever-popular Cornish Cross breed.

What Is a Broiler?

So what did midcentury breeders produce, exactly? The program aimed to create chickens that ate a lot over a handful of weeks to produce carcasses with more breast meat and bigger drumsticks. Secondary traits were bred into the chickens later, such as greater tolerance for cage-raising and easy-to-pluck feathers, but bigger, faster has driven broiler production over the years.

Since the 1950s, Chickens of Tomorrow have gone from a growth time of 16 weeks to, for breeds such as Cornish Cross X and Jumbo Cornish Cross, a finish weight of 5 pounds in just six weeks (harvested earlier than that, the chickens are known as Cornish game hens).

Broilers boast freakishly large breasts and giant legs. Commercial breeders—by and large corporations—rely on artificial insemination to fertilize eggs, as the broiler’s body proportions make mating difficult to impossible. They grow faster than they produce feathers, so you can often see patches of exposed skin. They’re hardly hearty, with a propensity for heart attacks and overheating that requires constant management.

Much of that sounds pretty bad, and, for chickens raised in battery cages on industrial farms, life can be pretty rough. But I, like many sustainable farmers, raise Cornish Cross chickens, for my family’s dinner and to sell at market. I understand the animal’s troubled past, and I’m ambivalent about raising the same breed served at KFC.

However, I don’t believe a modern broiler chicken is any more “unnatural” than Gregor Mendel’s peas. My flock’s meat, the product of birds raised in an open-air environment designed to give birds the best life possible, is worlds away from grocery-store chicken in taste, sustainability and ethical compromises. So what’s the differentiator between my birds and the shrink-wrapped meat in the big-box grocer’s poultry aisle? Two words: grass and sunshine … but we’ll get to that.

Getting Started With Broilers

The process of raising broilers—for the dinner table, market stand or both—starts out the same as raising chicks for egg production. First, you find a hatchery to purchase chicks, because most states require National Poultry Improvement Plan certification to hatch eggs for commercial sale (layers, too) and because you probably won’t replicate a half-decade of selective breeding in your backyard.

Chicks are shipped via surface mail and can survive as long as 72 hours on reserve yolk ingested prior to hatching; many will know this from mail-ordering layers, but expect to awaken early to a delivery-day call from the post office.

One genetic drawback of all that cross-breeding is fragile chicks, so take precautions to ensure baby broilers’ health. Use heat lamps to maintain a 95-degree temperature in the brooder box the first week. Called “spot heating,” it allows chicks to escape the lamps if they start to overheat. Reduce by five degrees each week following.

Create a bedded floor of absorbent material, and give chicks plenty of water and starter feed. Start with feed containing 22 to 24 percent protein, then step down to a 20 percent protein finisher after four weeks. Many let broiler chicks feed at will, with feeders kept full to promote rapid growth. On our farm, we opt for thrice-daily feedings to encourage strong skeletal growth, which is sometimes undermined by constant feeding.

In “Getting Started with Broilers,” author Wayne Martin, with The University of Minnesota Extension, points out some great management techniques when raising birds for the table.

Now for the sunshine and grass: Our chickens are pasture raised, which we find the most ethical, sustainable and flavorful method of raising meat poultry. Birds move outside when they’ve feathered out enough to survive outdoor temperatures; if you’re raising sequential flocks throughout the warmer months, your first flock might need to be a bit older when they go out than your August chicks.

Know up front that broilers aren’t great at staying alive; roosters won’t protect hens like free-ranging layers, and they’re too ungainly to effectively elude predators. So you need to protect them in a pen that’s secure and lightweight. The University of Kentucky has an online template: “Making a Hoop Pen for Pasture Poultry” by Steve Skelton, Jacquie Jacob and Tony Pescatore. It’s an ideal, cost-effective model of a 30-chicken pen.

Pastured poultry gets fresh air, clean grass and plenty of bugs. Grass doesn’t really supplement broiler feed; rather, the dietary additions impart flavor improvements over battery-cage poultry. In the words of one of our farming mentors, “Once you have pastured poultry, you can’t hardly go back.”

Hybrid broilers gain roughly 1 pound for every 2 pounds of feed, so plan on about 10 pounds of feed for each 5-pound chicken. Halved PVC pipes make great feeders (see photo at left), but wear gloves or distribute feed quickly; ravenous chickens will draw blood. Refill waterers throughout the day, especially in hot weather, to keep broilers hydrated.

As we say on our farm, a flock of broilers will quickly “poop up” the ground; that much feed gets converted into a lot of feces, causing unsanitary and unsafe conditions for the birds. Move your shelters forward at least twice a day to fresh grass. If you struggle pulling them with a rope, the front lip of a hand truck slipped under the coop’s front edge can be an immense help. Chickens love to escape during this process, so we set up electrified chicken netting around the coops and let them run free for a bit while moving the coops; they race back inside when food is poured.

Cornish Cross chickens need to be harvested when they reach full weight, usually around six weeks, or they’ll soon become unhealthy. If you harvest on the farm, then you’ll just need a kill cone, sharp knife and time to pluck. But if your aim is to sell meat, you probably need a processor. Unfortunately, not many slaughterhouses handle chickens anymore, though mobile processing centers in conjunction with poultry processing programs somewhat fill the void with certification and state-approved facilities.

In the likely event you take chickens off-farm for processing, you need some transport crates, plastic coops that fit about 10 birds each. You can load chickens when they’re inactive at night, but leave them on the ground overnight (stacking is bad for chickens not on top) or load crates before dawn. Withhold feed for eight to 12 hours before delivery, but continue to provide water. If you can’t process all your chickens in one visit, take the roosters first; they grow faster than hens.

Decide beforehand whether you want whole or cut-up chickens. Breaking down birds adds to the processing cost but brings a higher premium at market. Our farm had get success selling whole chickens because our clientele was comfortable with the product, but your market might be different.

Heritage and dual-purpose meat birds are a tempting prospect, but we raised a variety of nonhybrid breeds and found them to be problematic; they took 12 weeks to mature, and our customers complained of tough meat and scrawny carcasses. We decided that, when raising meat birds, the best we could do was our very best, and that’s how we approach raising Cornish Cross chickens.