How To Be A Superhero To A Rescue Chicken

Follow these steps to save the day and rescue a feathered friend in distress. 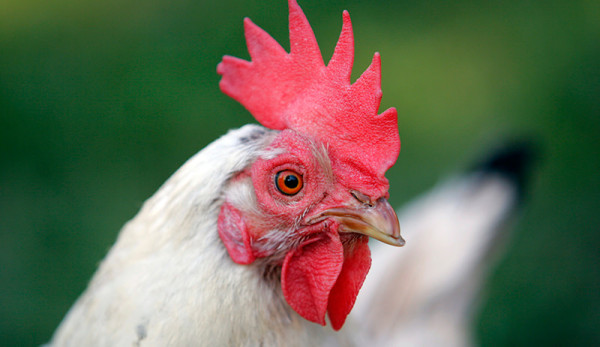 ‚ÄúShe‚Äôs in pretty bad shape,‚ÄĚ Rachel told us as she led us back through the store to where a half-dozen silver stock tanks stood under a series of heat lamps. She stopped beside the outermost tank, one labeled Golden Comet pullets. Inside, more than two dozen buff-and-bronze babies scampered around, eating, peeping, pooping‚ÄĒand picking on one chick in particular. Almost twice the size as her tankmates, the little pullet was leftover from an earlier shipment. She had already begun growing in her pin and tail feathers, and the younger birds had enthusiastically yanked them all out. Her bleeding rump and wings had been sprayed with Blu-Kote to seal the wounds, and she cowered behind the waterer, startled every time another chick approached.

We took her home that afternoon. The chick, whom we named Violet (the Blu-Kote had turned her purple), did not fit at all into our farm‚Äôs scheme. We raise heritage poultry. Violet was a cross breed. Our birds were all adults. Violet was perhaps 3¬†weeks old. I couldn‚Äôt just leave her there, though, and my husband, Jae, detests bullies, so home she came.

Violet was our first rescue bird, but definitely not our last. Over the years, we‚Äôve been called by feed stores and by post office branches for unclaimed chick shipments. We‚Äôve had birds abandoned on our doorstep. We‚Äôve even had a Good Samaritan bring us a hit-and-run victim she found suffering on the side of a local road. With support, nurturing and a lot¬†of TLC, most of these forsaken fowl have thrived and led happy, healthy lives.

Ready to help a chicken in distress? Follow these steps to become a poultry superhero.

Your rescue bird will need a safe, quiet place in which to recuperate. A large pet carrier, a dog kennel, a sturdy crate or box, or even a chicken tractor will work well. Your hospital pen should be draft-free and placed in a sheltered location, such as a garage or basement, well away from other animals (at least 30 feet from your flock to minimize any potential contagion). The pen should be enclosed to keep the rescue bird from hopping out and suffering further anxiety by getting lost in unfamiliar surroundings.

Warmth equals comfort and safety, like that offered by a mother hen. A rescue bird needs that mental reassurance‚ÄĒthat feeling of security that heat provides. Keep the temperature in the hospital pen at about 75 degrees F unless the rescue bird is a chick in its first month of life; in that case, adjust the heat as required by the chick’s age.

Injury, abandonment and neglect can cause stress and shock in a chicken of any age. A boost of electrolytes can help restore and rebalance a stressed bird‚Äôs body functions. Be sure to use electrolytes specifically formulated for animals, such as Sav-a-Chick or Streseez Plus, and follow the instructions on the package to ensure a proper dilution ratio.

Bear your rescue bird‚Äôs age in mind when offering food. While the added protein in starter/grower feed can be beneficial to an injured adult, the extra calcium in layer rations can permanently damage a chick‚Äôs kidneys. Also consider the rescue bird’s ability to eat. Crumbles are easier for an adult rescue bird to handle than pellets. If your rescue birds are baby chicks, offer Gro-Gel, an easy-to-digest, hydrating gel containing protein, probiotics, peptides and vitamins.

Despite being quarantined from the rest of your flock, your rescue bird will need a companion. Chickens are social creatures, and being left alone for an extended period of time will only cause a rescue bird added stress. Violet became fast friends with a toy Easter bunny we put in her pen, drawing much comfort from it. The two became inseparable. We made sure that each rescue bird after Violet had its own plush pal for company.

For rescue birds with injuries, a clean pen is vital. Provide fresh litter frequently to prevent infection due to contact with feces. If an injury needs cleaning, treat the rescue bird outside of the hospital pen; a surface spread with a clean towel works well. Wear protective gloves and use sterile gauze and distilled water to cleanse the wound. Seal the injury with an antiseptic, such as Blu-Kote, and allow it to dry before returning the bird to the hospital pen.

Your rescue chicken may require personal soothing to keep calm. Carefully wrap the bird in a warm towel, and then hold it gently, speaking in soft, reassuring tones, but don‚Äôt force a cuddle if the bird is unwilling. Birds suffering from shock may be unable to eat or drink on their own; this is especially true of shipped chicks in transit for too long. Familiarize yourself with dropper- and syringe-feeding techniques should this become necessary.

Unfortunately, there are times when a bird is beyond rescue. The poor hit-and-run hen is one example; her shattered body was beyond assistance. Another example is the call for help I once received from our post office: A¬†shipment of chicks had arrived two days late and the carton was ominously quiet. Although I was there within minutes, it was too late for those poor babies. Poultry superheroes can only do so much.

Violet, however, was a success story. Although she didn‚Äôt grow her tail feathers back for almost a year, her charming, outgoing personality started coming through after a week in our care. She became an indispensable member of our flock and enjoyed a long and happy life with us instead of the brief and bullied one that was almost her fate.