The excitement in our neighborhood this week was a big swarm of bees. 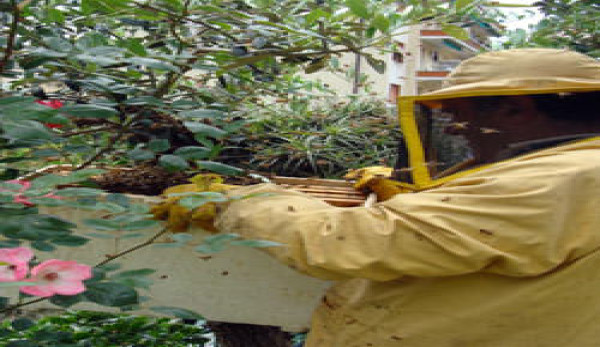 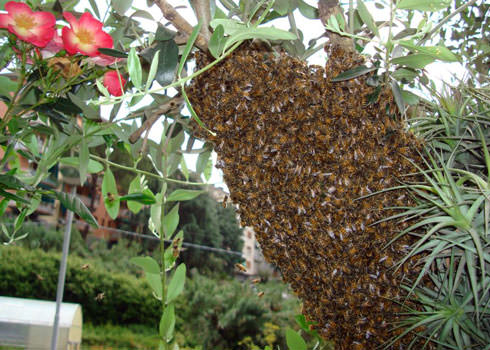 I found a swarm of my neighbor’s bees in my backyard.

The excitement in our neighborhood this week was a big swarm of bees. I was walking back from the garden and noticed a lot of bees in the air. I looked around and saw a small mass of bees gathering on a little olive tree in my neighbor‚Äôs yard. I rushed up to the office to grab my camera and went back down to take some photos. Although I‚Äôve never kept bees myself, I‚Äôm pretty sure bees aren‚Äôt particularly dangerous even when they‚Äôre massing, so I got pretty close with the camera.

Lots of people keep bees here in Rapallo, Italy. One sees most of the brightly painted hives along the edges of the city, but a few people with the larger gardens in the city center also have bee hives. Several of the small farmers who sell produce at the daily vegetable market also sell honey, beeswax candles and propolis. I often buy propolis myself to use as a general protectant and a wound sanitizer.

Although we do see a lot of Honey bees in our garden, I think the larger portion of the bees we see are solitary bees. In addition to Mason bees, there are a half dozen species of big solitary bees that come around when the tomatoes and squashes are flowering. Some of those are particularly good looking bees. I think the fact that all the populated zones in Liguria are surrounded by brush and woodlands helps keep the number of wild bees quite high.¬† 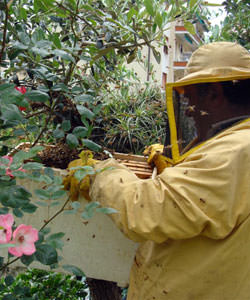 My neighbor patiently scooped up the bees and returned them home.

The Honey bee situation here in Italy is, like the States, troubled by the Varroa mites, and beekeepers report a serious decline in hive population numbers. But there are so many people who do keep bees that even with the decline, there are a whole lot of Honey bees still flying around.

I get a kick out of the fact that the two of the most common vehicles here in Italy are called Vespas and Api, or Wasps and Bees. Vespas are scooters and Api are the common little three-wheeled vehicles, which actually are just a tiny truck body mounted on a scooter.¬† It cracks me up to see that inside the cab, instead of a steering wheel, there is a set of scooter handlebars.

So, while I was photographing the bee swarm, one of the neighbors who keeps bees came along with his gear to collect the bees, which were, in fact, his. He says the crazy wet and cold spring disturbs the bees, and they more frequently leave their hives to travel around.

Once he put on his hood and gloves, he gently scooped the center of the swarm (and the quee) into the transportation box and waited patiently while the swarm re-formed in the box. Then he carried the bees back home. The nonchalance of the whole situation was charming, as if he was just retrieving a lost goat. I walked by the spot about a half hour later, and where there had been thousands of bees previously, there wasn‚Äôt a bee in sight.