The queen bee personifies strength, endurance, perseverance and harmony, making her a respectable guiding force of the hive. 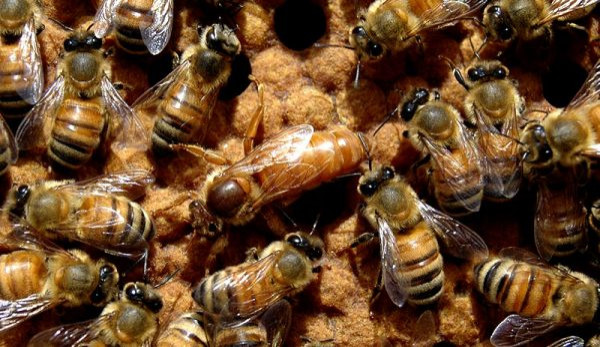 The honeybee queen is a formidable presence in her hive. She doesnāt rule with force or coercion. In fact, she doesnāt āruleā at all. Rather, her role is one of leadership by participationāhard work and seamless harmony are her tenets. Her singular role is so critical, without her presence, the colony would certainly perish.

Why is she so important?

What Does the Queen Do?

In most cases, there is only one queen per honeybee colony. She is cared for and surrounded day and night by her āattendantā bees. These worker bees are entrusted with the task of grooming, feeding and protecting her while she conducts her most important work. The queen is the largest bee in the hive and can be easily identified by her long abdomen. She is twice the length of a worker bee. She is the longest-living honeybee and can head a colony for two to five years if not superceded or replaced.

The queen is responsible for every new generation of honeybees. She lays between 1,600 and 2,000 eggs per day! She chooses where, when and how many worker or drone eggs to lay. In this way, she decides what the colony looks like in worker-to-drone breakdown.

Virgin queens take mating flights when they hatch from their queen cells. They fly to drone congregation areas (sometimes called āDCAsā) to mate with a dozen or so males bees, aka drones. She then returns to the hive with her spermatheca filled with enough sperm to lay eggs for several years. Other than leaving the colony with a new swarm, the queenās mating flight is the only time she will leave the hive.

How Does the Queen Lead the Colony?

The queen communicates her presence through the use of pheromones. Many times a day, her attendant bees transmit her pheromones to their sister bees (fellow workers, nurse bees, mortician bees and others working in the hive) to assure the rest of the colony that she is present. If the queen were to die, the colony would know within hours that they were queenless and immediately take action to fix the problem.

What Happens When Thereās No Queen?

If a hive is queenless or the colony determines that the current queen is unfit, the nurse bees will immediately get to work on making a new queen. They choose several recently laid eggs to make into queens. They do so by feeding the larvae royal jelly continuously rather than for only three days, as common workers get. Replacing an old queen is called supercedure.

As the growing queens reach maturity in their queen cells, which look like peanuts on the comb frames, they begin a series of competitive warning calls to the fellow growing queens in the hive. The sound is a high-pitched whine, called piping. This sound communicates a threat to the other potential queens. The first queen to hatch uses her stinger to kill the remaining would-be queens in their cells. The queen does not have a venomous stinger, and this is the only time she uses it defensively.

The beekeeper may also choose to requeen a colony. If he or she feels that a queen is not performing up to snuff, is weak or has poor genetics, she may be removed with a new queen put in her place. The new queen needs to be protected by a queen cage until she has replaced the old queenās pheromones, and the colony accepts her as their new matriarch. If placed in the hive without a cage, the workers would eliminate her before she had a chance to integrate.

Beekeepers will often mark a queen by painting a colored dot on her abdomen when she first takes up a colony. The colors used correspond with a year (and the yearās last number) to easily keep track of how old the queen is.

Thereās a reason our culture has dubbed women in powerful leadership roles as a āqueen bee.ā