Throughout a worker bee’s lifespan, it can adopt several roles in the hive that keep the colony functioning smoothly. 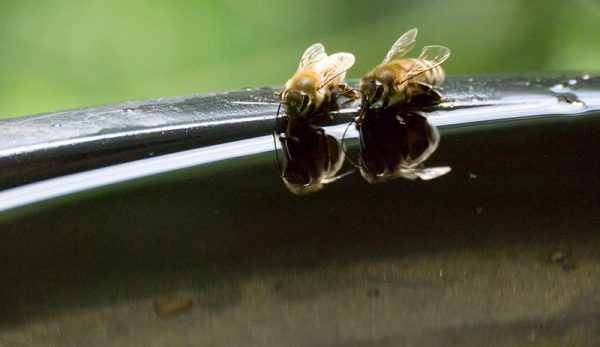 The honeybee worker is the backbone of the colony. As an individual, she is tiny, brave and armed with a single stinger, but as a collective, honeybee workers are strong, intimidating and a force to be reckoned with. A single worker bee transitions into a new hive role with each life stage, starting with the role of nurse bee and concluding as one of the foragers you see out and about gathering provisions in the field. In addition to these two roles, here are just a few of the amazing things the worker bee is capable of.

When a young bee hatches, she chews away the capping of her birth cell and emerges as an active member of the colony. Her first job is to clean out her hatching cell in preparation for the next generation. Most newly hatched bees are entrusted with the role of nurse bee. These bees care for the developing brood (the collective name for eggs and larvae), feeding them the appropriate feed through the various stages of early development and, finally, capping their cells before the cycle begins again.

Honeybees are notoriously nitpicky about keeping a clean house. They like to keep their space organized and tidy, but most importantly, they want to remove anything dead, dying or odiferous from the hive right away. This includes deceased members of their own hive as well as any dead or conquered intruders—think foreign bees, robber bees, wasps, ants, hive beetles or other bugs. Mortician bees are enlisted for the job. They carry out the dead as a basis to keep the hive clean. Beekeepers will often see two mortician bees carrying a single dead bee from the hive in mid-flight!

When the foraging bees return to the hive with pollen, nectar or water, they pass it along to the bees that make and store honey in the hive. These homemaker bees add digestive enzymes to the nectar to turn it into the start of honey, and other homemaker bees fan the nectar-enzyme mix with their wings until it reaches 18-percent moisture, and voila: honey!

Other homemaker bees are entrusted with the task of taking pollen baskets from the foragers and packing it into cells designated for pollen. Still others produce wax and build comb, repairing any damages (including the damage we beekeepers cause just by opening the hive), sealing cracks with propolis, and so much more.

The guard bees are the workers you see at the entrance of a hive. They’re usually a bit older than the homemaker bees, as evidenced by their developed stinger. Their singular role is to protect the hive from intruders, whether that be foreign robbing bees or something larger—like you, the beekeeper! If a hive has several openings, such as a “backdoor” in a feral hive or if the beekeeper leaves a top entrance open, guards will be stationed at each entrance.

Very few worker bees get the honor of attending the queen. Each queen has a dozen or so attendants who care for her every need: They feed her, groom her and protect her. When the attendants are buzzing around their charge, it is very easy to spot the queen on a comb of brood. She is the one in the center of the worker bees fanned out like a flower around her.

The foraging worker receives the most accolades of any of the worker bee roles, but the truth of the matter is that the forager is the oldest bee in the hive outside of the queen. Foragers have often participated in several of the roles listed above and are at the end of their life cycles. They work tirelessly to be the breadwinners of the hive, bringing home the nectar, pollen and water that will sustain the hive, feed the brood and see the hive through winter. The easiest way to spot foragers is to watch the entrance to see the bees that return with full pollen baskets. The workers rapidly come and go from the hive as long as the weather is fair. They’re also easily identified by their worn bodies and tattered wings.

By looking at the roles that each worker plays in the hive, it’s obvious that the honeybee colony is a well-tuned, expertly functioning machine, with each cog playing its role beautifully. When each role is filled and the colony remains healthy, the hive can explode in numbers, produce surplus amounts of honey, and fight pests and diseases with ease.