Yow! What to Do After a Sting by a Bee or Wasp

It happens to beekeepers as well as outdoor enthusiasts. Here's what to do right after a sting. (If you're allergic, see an allergist before it happens.) 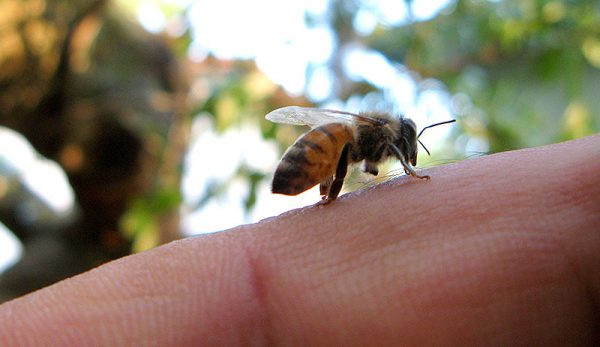 Whether you’re a devoted beekeeper or simply a summer-loving, outdoorsy type, you will probably eventually get stung by an insect such as a honeybee or wasp. Chances of stings increase as the summer moves along, simply because by that time the nests of most wasps and bees are larger, their populations are bigger and their aggression is higher because of dwindling food resources. It’s wise to be cautious around existing nests and to be prepared for a sting, especially if you are in the charge of children.

Here’s what to do when you or someone you care for gets stung.

Move to a Safe Place

The first thing to do when you’ve been stung is to move yourself and any one else in the vicinity to a safe place. Quickly move away from the sting site, if possible, and make an extra effort if you’ve located a wild wasp or yellow jacket nest.

If you’ve been stung by a honeybee in your own apiary, the first step is to remove the stinger. After the bee stings you, she flies away, leaving the stinger attached to your skin with its tiny barbs. She will continue to buzz you, but this is a suicide defense mechanismâ€”the honeybee cannot sting a second time. (Wasps, hornets and yellow jackets leave no stinger and can sting again.) Once it’s in you, the bee stinger continues to pump venom into your skin with every passing second, so the faster you remove it, the less venom your body receives, and the less chance of reaction or prolonged pain. Move fast! Scrape the stinger out by using your fingernail or a credit cardâ€”imagine removing it with a sideways motion, scratching along the skin, rather than pulling it out. Trying to pull out the stinger often leads to it being pushed deeper into the skin.

Do you have, and can you identify, plantain growing in your yard? If not, this “weed” is a very handy plant to have in your herb garden or in a potted plant nearby. Pluck a leaf, chew it up and place the natural salve directly on the sting as quickly as possibleâ€”it reduces inflammation and pain on the spot. This invasive species was brought to North America by European colonists; it’s prized for its medicinal qualities.

Use Other Natural Remedies

Other natural sting remedies include placing diluted apple cider vinegar, honey or a baking soda paste (made with water and baking soda) directly on the sting. Wasp and yellow Jacket venom is different from honeybee venom, so if you are allergic to one, you might not be allergic to another. Always consult your allergist for any necessary testing, and follow the recommendation for treatment.

Stings happen no matter what you do, but with a keen eye and some preventative maintenance, you can significantly reduce the threat of stings around your home and gardenâ€”even without toxic chemicals. As beekeepers, we never want to kill insectsâ€”we know that each and every wasp or yellow jacket serves a purpose, as unpleasant as they can be. So think safety in terms of prevention, and look ahead to the spring: Check the corners and crevices of your home awnings, deck roofs, balconies and other sheltered outdoor spots where you know nests are likely to form. Remove the very small nests as you see them, quickly. They can grow rather fast in the spring, and each day makes a difference.

You can also spray the area with an essential oil blend of lemongrass and rose geranium oils; lemongrass mimics the pheromones of most queens, and new queens will opt to build their nest elsewhere. I keep a spray bottle of these oils, diluted in water, to spray in these areasâ€”and it works. Experiment with it and see what works for you.