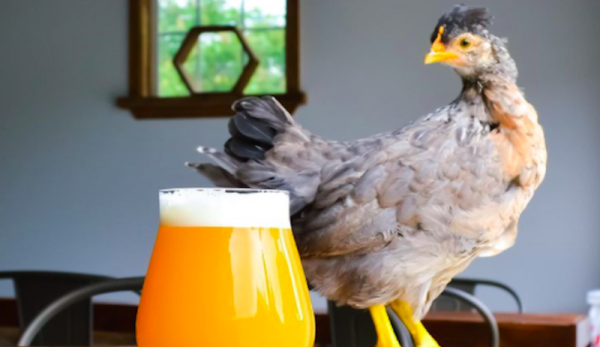 The team behind Wayward Lane Brewing in Schoharie, New York originally met as college friends in Denver, Colorado, where they bonded over a shared interest in craft beer and home brewing. But it wasn’t until farm manager Andrew Rowles moved to the upstate New York region in a bid to revive his family’s farm that the momentum to launch their own venture kicked in.

“While I was learning how to be a farmer, my partners Kyle, Adam and Abbie were home brewing and perfecting the craft,” recalls Rowles. “They were searching hard for an affordable location to open their own brewery when I playfully tossed the idea out that they come here. I sent them a list of convincing reasons why upstate New York would be an ideal fit. And they actually went for it!”

Taking time out from running the brewery, we spoke to Rowles about how beekeeping fits into the fabric of the farm. We chatted about how Wayward Lanes plans to integrate pawpaw fruit into 2022’s brewing plans. We also got into the challenges of maintaining an 1800s hop house.

The tap room at Wayward Lane Brewing is based out of a hop house originally constructed in the 1800s. “It would have been easier to build a new building, frankly. But we have so much character in this one. Iâ€™m glad we went through with it,” says Rowles when talking about the structure.

“The barn was an absolute mess,” he explains. “We didnâ€™t have a foundation, insulation, electricity, water or septic. We couldnâ€™t even begin renovations until we had all of the groundwork in place. For a while it was seven days a week, 12 hours a day. It was trying to say the leastâ€”but worth it.”

Read more: At Arrowood Farms, brewing happens from the ground up.

Bringing Bees into the Brewing Mix

Beekeeping has become a crucial part of Wayward Lane’s brewing process. “Where the honey and other farm ingredients are going to shine the most are in our spontaneously fermented coolship ales,” explains Rowles.

“We started our coolship program about a year ago now and have the beers resting in French wine barrels in the upstairs area,” he continues. “After we decide they’re ready for bottling or blending, we will think about conditioning with our own honey and farm ingredients.”

This year, Wayward Lane plans to use pawpaws in some of their beers. (The fruit trees are part of the brewery’s permaculture orchard.)

“My biggest concern is that we are somewhat waterlogged,” says Rowles of the development. “[It’s] a blessing for our spring-fed brewery but a curse for trying to establish fruit trees.”

Right now, the brewery plans to use the fruits of the orchard in a series of spontaneous ales that will spotlight tart cherries, aronia berries, elderberries, brambles and pawpaws.

Read more: Pawpaw is the hot, new cropâ€”that’s been around a long, long time.

Beyond the bees and the fruit orchard, a crew of resident animals headed up by Merlin the cat also help keep Wayward Lane ticking.

“Merlin is the namesake of our Berliner Weisse Sour Beer, Merlin in Berlin,” says Rowles. “It’s not a kettle sour, but actually a yeast strain that produces lactic acid, which gives it a very pleasant tartness that we combine with more tropical fruits that we will be using in our long term spontaneous beers.”

Rowles adds that while the brewery has not yet honored the dog squad of Link, Eva and Sadie with their own brews, “I’m sure they will happen!”