How to Make Beekeeping & Chicken-Keeping Intersect

With a little planning and preparation, you can have a buzzing hive alongside your clucking coop. 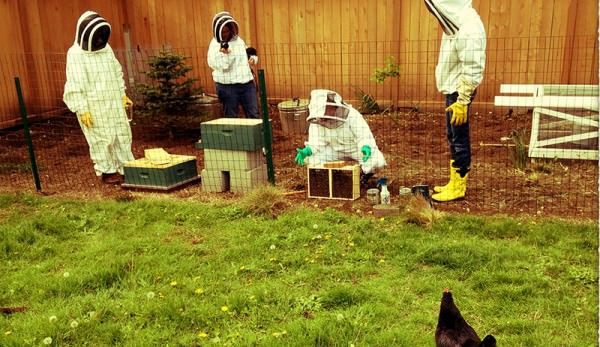 No doubt by now youâ€™ve heard about the plight of honeybees. Colony losses continue to be far too high, and there doesnâ€™t seem to be a foolproof remedy on the horizon. Whatever the reason may be, the sad reality is that these beautiful insects are in a lot of trouble. And where thereâ€™s trouble for the bee, thereâ€™s way more trouble for us.

Honeybees are used extensively to pollinate many of our crops. In fact, the pollination practice for many large-scale fruit and vegetable growers relies strongly on the assistance of these busy insects. Almonds in California, apples in Washington, pumpkins in Illinois and blueberries in Maine all require the assistance of pollinators to transform blossoms into tasty nutritional food that we love to eat.

So as you tuck into a few of your delicious homegrown eggs, ask yourself how you can help in the struggle to save our honeybees. It may seem like you canâ€™t keep any bees because you know that anything that flies or crawls isnâ€™t safe from the predatory eyes of your birds, but Iâ€™m here to tell you that chickens and honeybees can easily coexist in a single backyard, and your chickens wonâ€™t even have the desire to sample one of these newfound additions to your homestead, nor will they be intimidated by them.

Whether itâ€™s in your city backyard or a rural plot of land, the birds and the bees will get along famously. In fact, your chickens can even play a significant role in helping your honeybees thrive by assisting with pest management.

You might also be pleasantly surprised to find out that many chicken keepers have evolved into hybrid chicken-keeping beekeepers. Whether they are hobbyists, preppers or small-scale biodiverse farmers, many of these folks have jumped into beekeeping and are having a blast. Once you have a few years under your chicken-keeping belt and youâ€™ve ironed out most of the creases in this rewarding hobby, maybe itâ€™s time to take a look to see if backyard beekeeping is something worth exploring.

Honeybees do incredibly well within our cityscapes. Abundant natural green spaces, plentiful varieties of flower sources in our gardens and our continued commitment to diminish the use of pesticide application on the foods that we grow and on the grass under our feet make for great habitat for honeybees.

After all, wouldnâ€™t some home-harvested honey in some tea or on some toast be a great addition to those delicious bright-colored yolks in your morning meal?

Will I Get Stung?

This is generally the first question most aspiring beekeepers ask. Well, hereâ€™s the bad news: The probability of getting a few stings is pretty high (here’s what to do when you get stung), considering that each colony of honeybees can have a population of 50,000 bees in the height of the summer season and you create disruptions when you inspect your hive, but you can minimize the probability of a sting or two by wearing a bee suit, gloves and veil when you inspect your hive. Down the road, you may even shed some of the armor as you become more comfortable with tending to your honeybees.

Itâ€™s also important to remember that honeybees do not want to sting. Itâ€™s their last line of defense because they will soon die after using their stinger. Unfortunately, many people have a hard time distinguishing between a honeybee and aggressive wasps and hornets. Ask most folks to identify a wasp or hornet, and they will generally call it a bee. Itâ€™s these ruthless wasps and hornets that do the bulk of the stinging and give the gentle honeybee such a bad rap. Honeybees have one purpose in life: to ensure that their colony survives. All that theyâ€™re interested in is protecting their hive and foraging for pollen and nectar.

Because you provide neither of these essential foods, honeybees arenâ€™t too interested in investigating you, so dispel the fear that your bees will be a constant nuisance in your backyard. Those bees will only be interested in rapid flight to and from the hive in order to explore abundant sources of pollen and nectar for the survival of the entire colony.

Hive location is a big decision and can become complicated when backyard chickens are involved. Depending on the size of your plot, youâ€™ll want to strike a balance between being able to see your hives and providing some distance from your chicken run.

Create as much distance as possible, and if at all possible, place the hives in a sunny location facing east. Just make sure you can get a good view of the hive entrance: I promise youâ€™ll enjoy countless hours watching these incredible insects.

The learning curve with honeybees is a bit steeper than it is with chickens, and a lot of that has to do with the fact youâ€™ll have to help your small colony or new package of beesâ€”you can actually buy them by the poundâ€”grow into a thriving colony that will be strong enough to make it through its first winter.

A good understanding of pest management is the best way you can help your bees develop, and itâ€™s in this learning curve that youâ€™ll find the greatest challenges. Thankfully, youâ€™ll have your chickens there to help lend a handâ€”or, rather, a beakâ€”to help control insects. In doing so, you will be able to practice a more natural approach to beekeeping rather than many of the harsh synthetic chemicals that some beekeepers continue to use.

These parasites (the little coffee-colored things attached to the bees in the above photo) are a leading cause of death in honeybees. They weaken the honeybee by sucking hemolymphâ€”the beeâ€™s version of bloodâ€”from the beeâ€™s body while passing on deadly viruses as a parting gift.

The mite has adapted well to honeybees and will reproduce at an astonishing rate if left unchecked. In one to two seasons, these mites can weaken your colonyâ€™s strength and lead to its demise.

By carefully studying these pests, scientists and beekeepers have learned that female mites prefer to multiply in the cells of baby male bees, aka the drone brood. These cells are a bit larger than female cells and take an extra three days to mature from egg to fully formed bee. The female varroa mite knows this is an excellent opportunity for advancement because she understands that there is now more time to reproduce and further grow her population among the drone brood. Scientists and beekeepers began warfare on the mites by making frames that replicated the cell size for male bees, and lo and behold: The mites were attracted to these frames.

To combat varroa mites, natural beekeepers remove these frames from their hives while the male bees are in the larval stage, removing a great deal of mites from the colony. The frames can then be propped up on the ground and left to be cleaned out by your chickens in a free-ranging location away from the run. Your feathered friends will have no trouble devouring the larvae and attached mites and get a great source of protein, as well.

Once pecked clean, the frames can then be reintroduced to the hive and the process repeated in a few weeks. Itâ€™s understandable to feel a twinge of guilt knowing that your male bee larvae are being consumed by your chickens, but not taking an aggressive approach to varroa control can likely lead to the demise of your colony in the near future.

These two additional pests can become a nuisance in your hive. Thankfully, these pests are more of a nuisance than a detriment and generally can be kept under control by a strong colony of bees. That said, your chickens can once again help to keep a strong colony thriving with daily opportunity for free-ranging around your hive.

Wax moths (shown in the above photo) seldom make it past the guard bees at the hive entrance in strong colonies. They are either immediately killed or will exit and try another approach by laying their eggs in small nooks on the outside of the hives. Once the eggs mature into larvae, they will try to work their way into a hive through small cracks in the hive structure or migrate to a nearby beehive. At this point, your chickens will notice these tasty treats while doing a daily inspection around your hives and gobble them up.

Similarly, hive-beetle larvae will develop within a hive and exit between days 7 to 10 in order to pupate in nearby soil. Once again, your free-ranging chickens can discover these pests as they scratch and peck the surrounding ground around your hive.

With winter on the way and a chill in the air, maybe itâ€™s time to think about expanding your talents to include beekeeping. The learning curve may be steeper than with chickens, but you have lots of time to learn. Next fall, you may even get a taste of that delicious home-harvested

Rick Andrews is a country boy trapped in a city boy's body. In order to get his farming fix, he keeps a couple of honeybee colonies and a few chickens on his urban farm in Southern Ontario, Canada.