Tasha Trujillo from the Miami, Florida-based venture Palm Pike Apiary tells us how she creates a sustainable synergistic system in subtropical conditions. 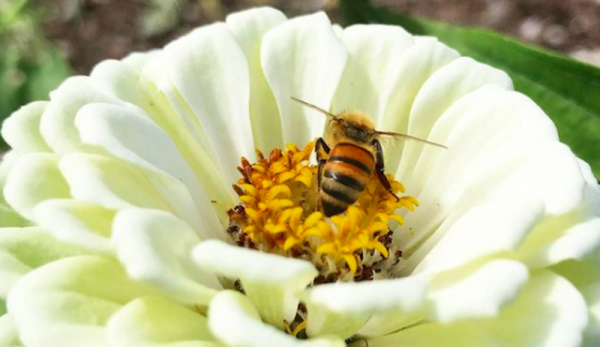 Tasha Trujillo’s journey to beekeeping started when she worked at a science museum in Miami, Florida. “They have an amazing exhibit on honey bees that featured an observation hive,” recalls Trujillo, who founded Palm Pike Apiary, a farm featuring bees and flowers, alongside Jovany Rodriguez.

Trujillo admits that she was “actually terrified of bees” at that point. But she found herself becoming fascinated by the exhibition.

After spending work breaks by the exhibit, Trujillo began to study environmental sustainability and discovered the vital role bees play in the food system. “It turns out that my partner and I had met someone at our rock climbing gym that kept bees and needed to give a hive away,” she recalls. “We got the hive and the rest was history!”

Taking time out from running Palm Pike Apiary, Trujillo took a few minutes to tell us about the hierarchy of the colony and how adding flowers to her enterprise has benefited the bees. We also spotlighted flowers that resemble the brain.

“Many people assume the queen makes decisions and is the ruler of the colony,” says Trujillo when asked about the most fascinating thing she’s discovered about bee behavior.

“However, it is actually the worker bees that make decisions together. If the queen isn’t laying enough eggs or becomes sick, they will kill her and replace her with a new queen.”

Taking the Plunge into Flower Farming

Alongside bees, Palm Pike Apiary has transitioned into growing flowers. Trujillo says there were a couple of reasons behind the decision.

First, she admits that beekeeping can be an intensive pursuit. “Imagine being in a suit while dealing with stinging insects in the heat and humidity of South Florida? It definitely took a toll on me after the first year.”

Secondly, while gardening is an “outlet for me and my mental health,” Trujillo found herself studying up on farming. She discovered that “there was an incredible need for flower farms in the United States.”

So after trialing a few flowers in her garden, Trujillo decided to “take the plunge by growing at the apiary like a real flower farmer.”

Trujillo’s early forays into growing flowers led to her learning that each growing region is unique. And she discovered there was a dearth of information available about producing flowers in subtropical environments.

“I just needed to go for it and I always say the same to new growers!” she recalls. “Just try and try again. Don’t be afraid of making mistakes because mistakes just mean you’re trying and learning.”

Read more: Want something new in the garden? Try these old-fashioned flowers!

“My favorite flowers this season would have to be my cockscomb celosia. I call them brain flowers because they resemble a brain,” says Trujillo.

She adds that zinnias have proven to be the flowers most popular with her customers. “I was able to grow giant zinnias towards the end of the season. They were a huge hit with florists!”

Reflecting on the rewarding nature of caring for bees and growing flowers, Trujillo says she appreciates “seeing all the different pollinators enjoy my flowers.” She highlights that her apiary isn’t just filled with honey bees. It also includes “hundreds of native bees and butterflies” that fly and flutter from flower to flower.

Trujillo also takes joy from seeing her customers’ happy faces. “It’s something you can’t make up,” she says, “seeing someone get as excited about the flowers you worked so hard to grow!”