What Goes on With Bees Inside a Winter Hive?

Bees are quite active during cold weather, but things are different. Workers live longer, for one, and there are no drones. 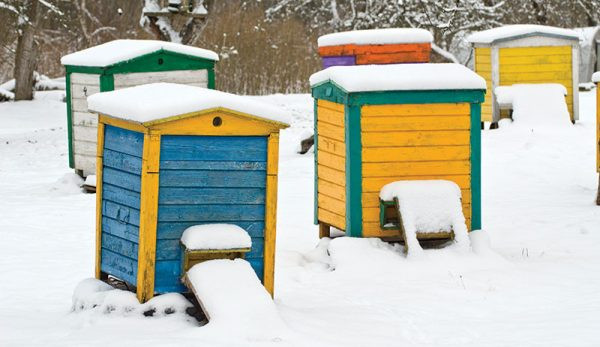 Itâ€™s winter. Youâ€™re cozy inside with central heat, but what about your bee yard? Snow is mounded on top of your hives and drifted along the sides. What are the bees doing in there? How do they keep warm? Though you canâ€™t see it, the hives are buzzing with activity even now.

A winter colony consists of a queen, several thousand worker bees and sometimes broodâ€”but no drones. A droneâ€™s only functions are eating and attempting to mate with a virgin queen, but no queens are produced during the winter. When the nectar flow began to slow, workers eliminated a drain on their food resources by expelling drones from the hive and leaving them to starve.

Meanwhile, the workers have prepared for cold weather. While the bloom lasted, they were collecting and storing pollen to feed brood and nectar to make honey. The amount of food they need depends on the size of the colony and the length and severity of winter.

In the middle latitudes of the U.S., 50 to 60 pounds of stores per hive should be adequate. In the North, two or three times that might be required, and considerably less in the South.

At the same time, the bees were also rearing brood. In spring and summer, a typical worker has a life- span of about 6 weeks, but bees that develop in the fall need to survive for several months in order to raise a new generation in the spring. Winter bees are a special cast, often called fat bees because of the accumulation of proteins in the fat bodies of their cells.

Dealing with winter temperatures is a challenge for cold-blooded creatures such as honeybees. They canâ€™t regulate their own body temperatures, but they are marvelous little engineers, capable of managing the environment in the hive. They winterize it by sealing cracks and openings with propolis, a natural caulk made from the sap of tree buds and other botanical sources. However, the key to maintaining a survivable temperature within the hive is the winter cluster.

As nights and days grow colder, bees draw together and generate heat by flexing the thoracic muscles, which power their wings in flight. Think of it as flying in place. The cluster begins to contract as the temperature within the hive approaches 64 degrees F. By the time it reaches 57 degrees, the colony has formed a compact, stationary shell surrounding an inner core in which bees can move about and feed. The shell can be several layers thick, composed of bees oriented with their heads facing inward. Individuals, with the exception of the queen, take turns in the outer layer. She remains at the clusterâ€™s center at a relatively balmy 68 degrees.

The cluster contracts and expands in response to temperature fluctuations outside; this means the colony can survive even when the thermometer drops below zero. In less severe climates and with adequate food stores, it will even rear some brood to replace the older workers that die during the winter, though developing bees require temperatures between 86 to 95 degrees. In regions with severe cold, brood rearing stops completely until early in the new year. Prolonged severe cold can also prevent the cluster from moving within the hive to access food stores.

Once cold weather begins, there is very little for a beekeeper to do. A beekeeperâ€™s winter preparation, like that of the colony, takes place in the early fall. Combining weak hives to create strong populations, feeding if necessary to ensure adequate food supplies, and taking measures to prevent disease and parasites will give honey bee colonies a very good chance of emerging in the spring with a burgeoning population ready to bring in nectar for honey. For now, relax in your warm house and trust your bees to manage on their own until spring.