Beetles Are Pollinators Too

We often look at beetles as pests, but they do more than just compete for the fruits of our labors—they could be the best pollinators we have. 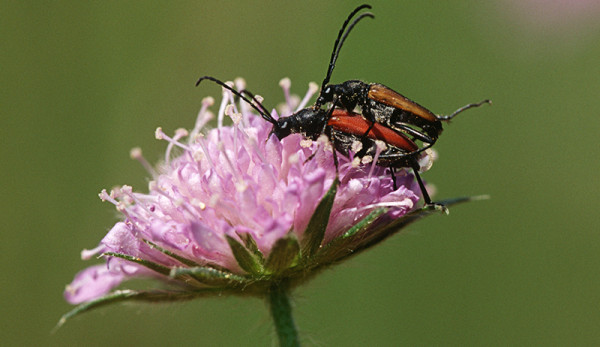 Beetles make up the most diverse group of pollinators in the United States. There are approximately 30,000 species of beetles and counting, as scientists identify new species on a daily basis. Beetles’ roles in an ecosystem generally revolve around scavenging and decomposing organic matter, but they can also play a major role in plant reproduction and food production.

Around 150 million years ago, plants and pollinators began specializing and adapting traits that suited each others’ needs, and beetles were among the earliest creatures to be included in nature’s matching games. It stands to reason that some of the longest-lived plants are pollinated by the longest-lived insects.

Magnolias, for example, have what is considered a primitive flower, which developed before bees existed. The chosen helper for magnolia pollination would be a type of beetle well-suited for crawling around in a wide open flower or descending into closed buds, transferring pollen to the appropriate reproductive organs and fertilizing the flower. This relationship has been successful, and the magnolia has toughened up its skin to allow for the beetles to eat its plentiful pollen and some of its leaves without being seriously damaged. Also, the tree has developed mechanisms to deny access to other types of insects during critical pollination phases, further solidifying the exclusive beetle-magnolia relationship.

The magnolia flower doesn’t have to smell good to lure in a beetle. Beetles have a unique taste for the aromatic oils of flowers that we wouldn’t necessarily want to bottle. Musky, yeasty, spicy, rotten or fermented describes the smells that attract these slick little macroinvertebrates. One of my favorite medicinal native plants, spicebush, has just what a beetle wants in a flower, good spicy pollen. Crabapples do, as well.

Add water lilies to this short list, and beyond these, there aren’t very many plants you’ll find in your garden or farm that are exclusively beetle-pollinated, but that is another one of nature’s tricks. Flowers with open faces and lots of small flowers inside, like sunflowers, are likely to entice a wide variety of insects looking for a meal. On one flower, you might find a fly, wasp, butterfly and beetle all serving the same purpose: spreading pollen.

This is a type of insurance policy that many plants have adopted. Generalized, rather than specialized, relationships create a back-up plan in case one part of the program fails. With the major decline in native pollinator populations in recent years due to pesticide use and habitat loss, it’s a good thing beetles are hanging in there as part of Plan B.

Ladybugs, Japanese beetles, rove beetles, ground beetles, fireflies, click beetles, soldier beetles, dung beetles—whether this is a list of your farm friends or foes, recognize the beetle for what it is: a low-lying, ground-burrowing, adaptable, diverse order of animals, outfitted with built-in armour and wings. It has survived in one form or another for at least 270 million years. If I were a flowering plant hoping for a future partner in life, I’d start making myself really interesting to beetles, maybe try to tone down my floral perfume to something more skunky, just as a little insurance policy in the game of life.