Beginner Beekeeper Q-and-A: What Goes on Inside the Hive?

Several types of bees in the hive play separate roles. Some, such as the queen, have only one role, while others have many duties that change throughout their lifespans. 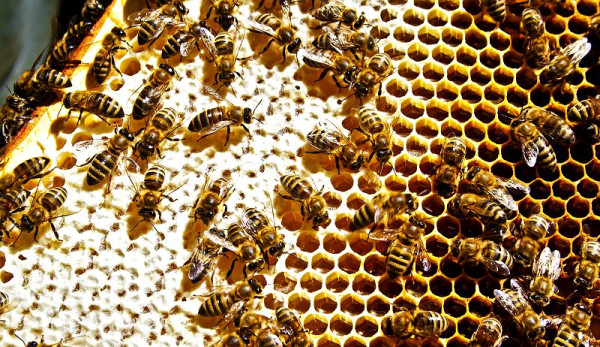 For a long time, humans existed with and even cared for honeybee colonies without truly knowing what went on inside the hive. If we’re being humble and completely honest with ourselves, there’s still a lot we don’t know. But we know much more now than we did even a century ago, and in light of changes in our climate, colony collapse disorder and the rampant use of deadly pesticides, it behooves us to keep abreast of how the honeybee colony lives, thrives and functions.

The inner workings of a hive deserve much research and attention, but let’s start with the basics.

Is the hive always dark, and is that a problem for bees?

The queen honeybee lives nearly her entire life under the cover of darkness, and in fact, the whole colony spends much of its life in the dark. And they prefer it this way. Bees don’t use their eyes to see in the hive; rather, they use pheromones to communicate, and they use their bodies to feel their surroundings.

What do the bees do all day?

Honeybees are master communicators and community builders. Every single bee in a colony has a role to play. Honeybees have several jobs throughout their lives, and those jobs change as they age. The queen’s role is to lay eggsâ€”that’s it, and it’s a big job. Drones, the male bees, are alive only to mate with other colony’s queens. That’s it, and it’s also a big job. But the worker beesâ€”all the female bees of the hive, and the ones that make up the majorityâ€”have about half a dozen roles (that we know of), and they carry the weight of the colony. Young workers are “nurse” beesâ€”caring for the brood in the hive. Other worker bees many duties include “household” tasks such as building the architecture of the comb (and repairing it), making honey and cleaning the dead from the hive. As they age and their stingers develop, house bees become forager bees and can leave the nest and forage for water, nectar and pollen. They also guard the entrance to the hive. That’s just for starters.

Does the queen ever leave the hive?

The queen does leave the hive, only once, sometimes twice, in her life. The first time, she leaves as a virgin queen shortly after she hatches, to fly to a drone congregation area to mate with a dozen drones from other colonies. If she lives long enough and the hive is healthy enough to cast a swarm, she might once again leave the hive with the swarm of bees to start a new colony. Otherwise, she remains in the dark of the hive to lay her several thousand eggs per day.

Do our hive inspections bother the bees?

Yes and no. The answer here depends greatly on whom you ask. The truth is, any hive inspection is disruptive. We humans are large and clumsy (especially compared with bees) and we inevitably destroy comb, crush bees and make a mess of things when we inspect a hive. It’s part of the process, unfortunately. That said, if we did not inspect our hives, we might not ever know whether the bees needed care, extra space, treatment for a disease, support with fighting off pests or myriad other challenges they face.

The more we know about the inner workings of the honeybee hive, the better we’re able to serve them.